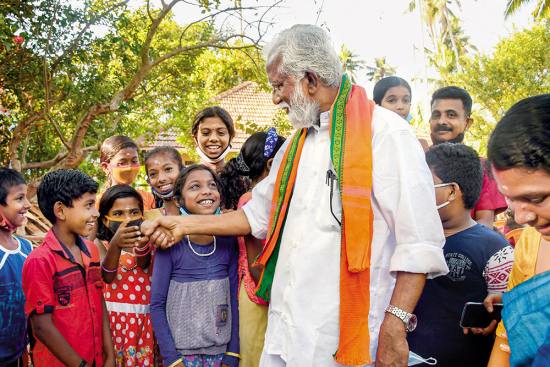 Ever since election dates were announ­ced for assembly polls in Kerala, the spotlight has been on Nemom constituency in Thiruvananthapuram—the lone seat held by the Bharatiya Janata Party (BJP) in the assembly. The BJP ­describes the constituency as the ‘Gujarat of Kerala’, but other main players in the fray—the CPI(M) and the Congress—are pulling out all stops to unseat the BJP from its first-ever representation in the assembly.

The BJP has replaced sitting MLA O. Rajagopal by giving the party ticket to senior leader and former Mizoram governor Kummanam Rajasekharan (in pic). In the three-cornered contest this time, he will take on V. Sivankutty of the CPI(M)-led Left Democratic Front (LDF) and sitting MP K. Muraleedharan of the Congress-led United Democratic Front (UDF).

“It’s the most keenly watched seat in the state and a fierce contest is in the offing. It is not going to be a ­walkover for any party,” says J. Prabhash, a political scientist.

Much is at stake for the Congress as the party wants...