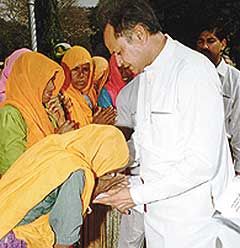 outlookindia.com
-0001-11-30T00:00:00+0553
Rajasthan chief minister Ashok Gehlot may have been tense and irritable before meeting with Congress president Sonia Gandhi last week but he was cheerful afterwards, though a little chastened. The high command had apparently decided to give him another lease of life even as it handed out a stern warning, telling him to pull up his socks. The sub-text: should things go wrong then his head would be back on the chopping block. Two reasons are now being touted on why Gehlot didn't get the sack: assembly elections are only nine months away and the all-important caste factor.

Regarded as a well-intentioned but poor administrator, Gehlot had made a spirited defence of his government. CWC member Ambika Soni, who has been backing Gehlot against his detractors, was at pains to point out that "the Rajasthan government has done very well in many areas, like adding to infrastructure, enhancing power generation capacity, improving female literacy, etc". Explaining away the summons to Delhi and changes in the state set-up, she said later, "We are toning up the party for the assembly elections." However, it's an open secret at the AICC that his failure on the drought relief front, leading to starvation deaths and farmers' suicides, has upset Sonia.

While Gehlot vociferously denied the starvation deaths and suicides, the negative press that both events attracted added to complaints from party MLAs and senior Rajasthan leaders about his style of functioning. His detractors also point out that he had failed to win even one of the three recent by-elections in his state adding that he couldn't even manage to retain his own parliamentary seat (Jodhpur), which he gave up to become CM. Their real argument, however, was that newly-appointed bjp chief, Vasundhararaje Scindia, represents the powerful Jat-Rajput combine and hence the need to counter her appeal with a powerful leader from one of the two communities. Since the Jats are known to traditionally vote Congress, it makes sense to have a Jat chief minister, they feel.

At the last minute, however, succour came in the form of non-Jat party leaders, who impressed on the Congress president that there really was no alternative to Gehlot. CWC member Natwar Singh and other Jat leaders like Sis Ram Ola, Colonel Sona Ram and Harinder Mirdha have been aggressively pushing the "Jat as CM" formula as a means of cementing the crucial Jat vote. But Gehlot's backers pointed out that it could prove counter-productive. Their view was that to give in to the demand for a Jat CM would be to alienate all the other castes in Rajasthan, creating a "Jats vs others" scenario. Likewise, giving the CM's post to a Rajput, the other dominant caste, would upset everybody else. Gehlot, who represents the tiny Mali community, was a perfect compromise candidate.

It was clear that the Jats—who already hold more than their fair share of cabinet berths—would not be satisfied with anything less than the chief ministership. By that reckoning, Natwar Singh would have been an ideal candidate, since he would counter Scindia's feudal appeal.

The alternative formula proposed was to have two deputy chief ministers, one each from the Jat and Rajput communities, as well as a new pcc chief. Girija Vyas, who has proved singularly ineffective (and has been unable to get on with Gehlot), said she wasn't keen on continuing as pcc chief. Another factor in Gehlot's favour was that despite the incompetence charges, there have been no allegations of large-scale corruption against him.

The campaign against Gehlot in fact pre-dates the Gujarat elections; he has been on notice since the Mt Abu chief ministerial conclave, which followed the rash of starvation deaths in the districts bordering Madhya Pradesh. Be that as it may, even his detractors admit that Gehlot's main problem has been three successive years of drought, compounded by an unresponsive bureaucracy (he changed his chief secretary recently)."Things are so bad in the state that changing a CM at this stage is not going to improve matters," admitted a senior CWC member. He denied that the party had written the state off, wryly pointing out that "the meteorological department has said we are going to have a good monsoon this year. And voters' memories are short".

Sweeping changes in the party set-up in three other states, namely Delhi, Chhattisgarh and Karnataka, are likely in the near future as part of the "toning up" exercise, which had been postponed because of the Gujarat elections.