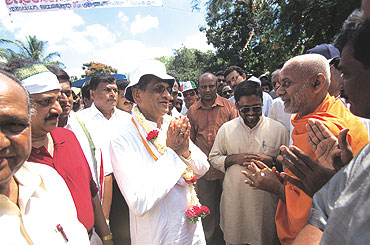 With the leadership in both states digging in their heels and putting politics ahead of propriety, there seems to be as little logic in the actions of the two chief ministers as there is water in the Cauvery basin. Jayalalitha's latest petition (October 8) requests the Supreme Court to "punish" Krishna, Karnataka irrigation minister H.K. Patil and its chief secretary A. Ravindra for contempt of court. On October 6 she had described Karnataka's conduct as "roguish" and an outraged Krishna responded by saying that Tamil Nadu was "perpetrating a fraud" and that he would go against the court's directive. Both have forsaken dialogue and taken to easier, emotive and politically convenient routes—"going to the people"—through a bandh (in Tamil Nadu) and a padayatra (in Karnataka). Karnataka has, in fact, not stopped at that. In protest, it has called off all Dussehra festivities and cable operators in the state have stopped telecasting Tamil channels. Their Tamil counterparts, in turn, have responded by stopping transmission of Kannada channels in the state.

Krishna has set out to fight probably the most decisive battle of his political career. Perhaps, in the bargain, he'll even forsake office, or undergo brief imprisonment as he flirts with contempt of court. On September 4, Krishna agreed to comply with the Supreme Court order to release 1.25 tmcft, but when on September 18 one of the three farmers who jumped into the waters drowned, Karnataka decided to stop the flow of water. "The government was compelled not to precipitate matters in order to prevent a repeat of violence and arson that was witnessed in Bangalore and other parts of Karnataka in 1991," the government pleaded in an affidavit to the Supreme Court, saying there was no "wilful disobedience" of its order.