General in his labyrinth? A 'seditious', scathing petition emerging out of army HQ questions his politics and policies. 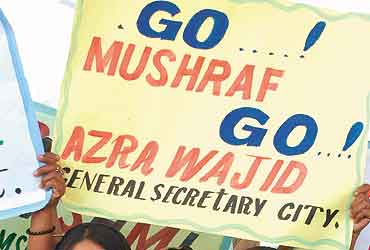 outlookindia.com
-0001-11-30T00:00:00+0553
For nearly two years now, conflicting ideologies have bitterly divided the Pakistani army, pitting the Islamists against those who support the US in its war against terror. Such dissensions, though, had rarely spilled out in the open, merely articulated, as it were, through whispers in the corridors of power or innuendoes in newspaper articles. But all this changed on October 20, 2003, when the Alliance for Restoration of Democracy (ARD) president, Makhdoom Javed Hashmi, convened a press conference to release a petition written on a GHQ (General Headquarters) letterhead and sporting the monogram of the Pakistani army.

The petition, written in Urdu, had been circulating among army officers. But Hashmi's decision to make it public was construed as sedition. For, the petition, among other things, demands that the army high command permit the Pakistani parliament to debate the Kargil venture, determine the motives behind the operation and the causes of its failure. It also launches a scathing attack against Pakistan President Pervez Musharraf and his pro-US policies.

Addressed to the "national leadership", the letter states, "We, on behalf of the Pakistan Army, assure the nation that it is your army—the army of Islam and Pakistan, and we expect every member of the parliament, from whichever party he belongs, to work for the sovereignty of the parliament". It goes on to describe Musharraf and his cabal as "national criminals" who have not only "plundered the national wealth with impunity but also helped the Americans, Jews and Christians to kill our Afghan brothers. Pervez Musharraf has turned Pakistan—the fort of Islam—into a slaughterhouse of the Muslims". The letter applauds the parliament, claiming that had it not been constituted, the Pakistani army would've been despatched to Iraq to kill "our brothers".

The letter asks the parliament to discuss a range of issues: what were the objectives behind the Kargil venture? Why did Pakistan suffer massive losses, even higher than what it sustained in the 1965 and 1971 wars? Why hasn't Pakistan, like India, instituted an inquiry commission into Kargil?

The letter then reveals information quite sensational—and incredible—in its sweep. It alleges that the commander of the Kargil war, Maj Gen Javed-ul-Hasan, had been a military attache in the US for four years, and had worked there under the CIA's supervision. "The Kargil war was waged at the behest of the US. He (Major General Javed) was even attacked by the officers and jawans for his poor planning of the [Kargil] war. But his mentors got him promoted as Lieutenant General, though he should have been sacked."

Through a series of questions, the letter brings under the scanner the coup Musharraf staged against then prime minister Nawaz Sharif. It asks: "What happened on October 12, 1999 (when Musharraf seized power)? Which units of the Pakistan Army were directed to surround Islamabad?" Then the spotlight is turned on corruption in the army, questioning the allotment of prime plots of land to brigadiers and generals in Lahore.

Finally, the letter demands that the parliament institute a national judicial inquiry comprising those chief justices of the Supreme Court and provincial high courts who were in office at the time of the 1999 coup. "The patriotic elements in the Pakistan Army will reveal these national secrets before the national judicial commission so that the culprits are brought to task in accordance with Article 6 (awarding death penalty to anyone who overturns the Constitution) of the 1973 Constitution." Just in case anyone had doubts about the agenda of those who wrote the unsigned letter, it concludes: "Our aim—a free army and a sovereign Pakistan."

Such damning information and prickly demands have the army bosses frothing with rage.Inter Services Public Relations director-general Maj Gen Shaukat Sultan thought the letter Hashmi had released was "forged to harm the unity of the armed forces". He further said "a high-level probe has been initiated into the communication and delivery of the letter, allegedly dispatched from the GHQ, though it is nothing more than a pack of lies". Federal information minister Sheikh Rashid Ahmed dismissed the letter as a ploy by India's Research and Analysis Wing to damage Pakistan's armed forces.

A week later, retribution began: Hashmi was arrested by the ISI on charges of maligning the armed forces and inciting them to mutiny. Interestingly, he has been booked for treason under precisely those sections of the penal code that the British government had invoked against Mahatma Gandhi and Maulana Abul Kalam Azad in 1914. Hours before Hashmi was arrested from the Parliament Lodges in Islamabad, he claimed to have received many such similar letters from army officers, all expressing disappointment with Gen Musharraf's policies.

Intelligence officials admit that the letter Hashmi released wasn't fabricated, and that other members of parliament too had received copies of it. It is through anonymous missives that disgruntled officers now seem to be waging their battle. For instance, in the recent past, one such letter had divulged information about the arrest of army officers. And though its content was dismissed outright, the ispr subsequently announced the arrest of army officers for their links with Al Qaeda and other militant outfits.

These sources also say that the Military Intelligence has been reporting about the discontent brewing in the army. For one, some sections are not pleased with the talk about striking a compromise with India on Kashmir. Second, they are opposed to Pakistan reducing its role in the region, on America's insistence.

In an attempt to mount pressure on Musharraf, the Islamist dissidents in the ISI recently dared to distribute an audio cassette titled Crush India among the border villages and the army camps, units and forward posts. The cassettes contain provocative songs, speeches and apocryphal stories about martyrs, hoping to imbibe in soldiers the spirit of jehad. The cassette reportedly states: "Since Independence, our army has been fighting with the enemy which is five times larger and equipped with latest weapons. But our army is equipped with a special weapon the enemy doesn't have—the spirit of jehad. Every Pakistani soldier is a soldier of Islam. He will be rewarded by Allah."

The ISI renegades have also circulated a booklet among junior officers, underlining the benefits of waging jehad against India. It states, "One who kills a kafir (non-believer) will not go to hell ever and there will be no shortcoming in his prosperity as regards to wealth and good food." It then tells "the soldiers of Islam" that "winning or losing is in the hands of the Almighty and defeat can only be provided by God..."; that even if soldiers die during a jehad, their pain would be equivalent to that of a mosquito bite.

Given these developments, it's unlikely that Gen Musharraf's efforts to transform the Pakistan army from a fundamentalist force into a moderate and liberal one will succeed in the near future. But the general, inexplicably, remains upbeat. Sample his response in a live BBC programme, Talking Point, aired on the second anniversary of the 9/11 attacks, "...Let me tell you, all my commanders are with me totally—each and every general is with me. Every man down to the sepoy is with me and behind me." Hope he is right.