"The gay scene has truly arrived. It's open and it's all over. Now husbands run off with other women's husbands." 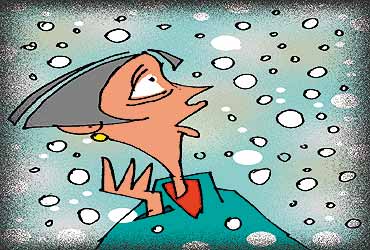 outlookindia.com
-0001-11-30T00:00:00+0553
It is disorienting to return to Delhi after having lived the better part of the last three months in remote, backward villages of eastern India. Those were villages without electricity, running water or even approach roads. You had to leave your car behind, then your motorcycle and finally walk several kilometres to reach the hamlets, where life in the 21 century isn't any different from what it was 2,000 years ago—women bathing in the river, sunshine glinting on their smooth dark skin, children frolicking in the village common, their high-pitched laughter blending with animal sounds, cowherds squatting under shady trees, their gaze stretching into the horizon. Daily rituals unchanged by time. Nothing intrudes here—not politics, not war, not internet. Reaching the nearest cybercafe is a tortuous eight-hour expedition that begins with a trek and ends with a bucking bronco car-ride on a bumpy road guaranteed to displace your spinal discs.

It's a world so different from the wide boulevards of Delhi, a city where time never stands still. Here change escapes you in the blink of an eye. Eyes narrowed open, denizens are constantly on the alert, lest they fail to notice the latest fashion trend, the newest business opportunity, the emerging power broker, the coolest titillation. Stomachs are full, but there is hunger in the eyes, for money, for power, for fame, for fun. Hunger to make it. Hunger for a new piece of action.

Nowhere is this hunger more visible than in the parties of Delhi's jet set.

"So what's happening in the Delhi party scene?" I ask my friend Kiran.

"Come on Kiran, it doesn't snow in Delhi," I reply.

Kiran looks at me pityingly. I hazard a guess. "Are Delhi's rich and famous now importing snow for their garden parties?" Maybe they create slaloms in their sprawling farms and serve skis with the barbecue. Ever since the government liberalised the import regime, Delhi hostesses have been importing Japanese orchids, Norwegian salmon, French wine and Belgian crystal just for their parties.

"No. They create little snow mountains on their black marble coffee tables and snort," says Kiran.

"What kind of fun is that, having snow up your nose?" I ask, totally bewildered.

"It's not snow, its cocaine," she replies.

I am stunned. Recovering my senses, I ask: "But didn't all that stop with that big drug bust-up?" After being caught from their snow mountains, the Afghan peddler and his hotelier client are still cooling their heels in jail. Many Delhi socialites, fashion designers and businessmen ran for cover. How can there be snow mountains on tabletops now?

"Oh it stopped for a while. Then the gang regrouped under a new brand name. It's not cocaine bashes, it's snow parties now," says Kiran.

Drugs, dropsy, hooch—scandals come and go, but these illicit businesses go on forever. When the scandal erupts, it shocks. But then it recedes from the front-pages and TV screens, it slips away from people's consciousness and from the radar screens of enforcement officials. And then, it's business as usual once again. The entrepreneurs of doom are more careful, but they still scurry about. Till the next scandal breaks.

Fun has always been the best merchandise in the marketplace but then, fun does not always need middlemen. To my question, what's new in Delhi, party-fiend Arun says: "Swap parties." "Oh, that's nothing new, I've been hearing of swap parties for a decade now and not once have I seen that actually happen". You go to the wrong parties, my dear," says Arun with affectionate disdain. "Well, in any case there's nothing new about husbands running off with other men's wives," I say scornfully. "Well, now husbands run off with other women's husbands," declaims Arun, shaking with laughter as he watches my shock."The gay scene has truly arrived in Delhi. It's open, it's frequent and it's all over," says Ritu. "The other day, a gay ambassador threw a party. It turned out to be a conclave of gays. We, the few straight people, were hopelessly outnumbered."

Gay diplomatic parties. They were fun before. Now they're puns. Just as "portfolio" no longer refers to investments. They are series of glamorous photographs taken, not by aspiring models, but by executives and entrepreneurs. It is needed for placement in the media. Stylish pictures ensure more space in the glossies, a category in which our all newspapers and magazines now fall into. No wonder the latest fad is to fly in top international "hair designers" to train Delhiites how to style tress to reduce stress. Presumably, half the battle in life is won if you look great.

Delhi, which is "India", wants to be America. And the countryside, which is "Bharat", wants to be India. In modern consumerist India, there's no place for spiritual ascendance to attain moksha. Upward mobility is the mantra of materialism and everybody's on the move. Delhi is speeding, cities are moving, villages are crawling. But in hamlets, time still stands still. There are still no schools, dispensaries or tubewells. Raising cows is still the main occupation. Walking still the only mode of transport. Malaria still kills. People are still illiterate. Stinky rice beer still the only intoxicant. It's a slice of 21st century reality in India that's so unbelievably far removed from snorting cocaine in rolled-up Rs 500 notes, from Punjabis learning Chinese hieroglyphics, from colourfully-packaged Swiss throat lozenges, from the twenty-odd varieties of luxury sedans, from middle-class bazaars stocking Italian pasta and Thai candy, from mutation of professions whereby a bribe-handler is intellectualised and legitimised as a "consultant", from swinging socialites who wake up at noon, by which time hamlet women have already toiled for six hours.