The Censors act moral police again, this time completely banning a film they perceive as 'dark' 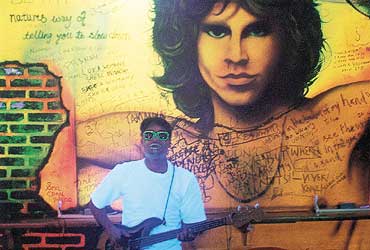 The script is rather familiar: the Censor Board playing villain to a bold and audacious new film. However, there's a twist in this tale. This time around, the board is not really wielding the scissors to snip away 'offending' portions. Instead, it has banned scriptwriter-turned-director Anurag Kashyap's debut Paanch (Five) because they find it totally unfit for our consumption.

To be sure, Paanch is not the first Indian film to run into rough weather with the censors. Shekhar Kapur fought a pitched battle against the cuts recommended for Bandit Queen. More recently Jagmohan Mundhra had to fight for the artistic sanctity of Bawandar. Paanch is an interesting new victim. Not only has the film been banned but this decision follows the thumbs down given to two digital feature films, Urf Professor and Divya Drishti, by the censors earlier in April. What ties in Paanch with the other two films is that they have all been made by young filmmakers who have tried to imbue Indian cinema with a rare rebellious, reckless, in-your-face sensibility.

Paanch is a film about five youngsters who are part of a rock group called Parasites. Obsessed with The Doors, the controversial Jim Morrison-fronted rock act of the Sixties, the Parasites too live through the Morrison-influenced haze of sex, drugs and hard rock. They take to crime in an effort to procure money for cutting an album. Paanch traces how they slowly get sucked into the mess, how they get trapped in the materialism and perversion around them. "It reflects the mental state of the friends, how they break down, lose trust in each other. It brings alive the claustrophobia," explains Kashyap. The cinema verite feel only heightens the gritty realism.

Clearly, Paanch pushes the envelope. Says filmmaker and Kashyap's mentor Ram Gopal Verma: "It's a film unlike anything I've seen before. The performances, the scene conception, the theme—it's all completely original."

But originality is obviously something Indian censors don't buy. "They don't have problems with just a particular scene," says Kashyap, "they're against everything." They feel the film has glorified drugs, sex and violence; uses foul language, has negative characters, offers no social message and doesn't offer 'healthy' entertainment. They even had problems with the female lead, Shiuli, a tomboy with a sharp tongue and a roving eye—not a "progressive" enough character.

Kashyap doesn't deny that the film is dark, disturbing and dwells on the angsty subculture of the urban youth. It's inspired by the infamous Joshi-Abhyankar murder case of Pune in which a family of nine was brutally murdered by a group of five friends, led by a university topper. Kashyap claims he came to know such people closely during his Delhi University days. "They are talented, ambitious, want to belong to the 'in' group but get frustrated when they can't. The film is about such outsiders," he says.

Personifying that outsider is Luke, the lead character in the film, who is impulsive, aggressive and intimidating. He also wants to become a star overnight, on his own terms. He is anti-authority and hates love songs. No wonder he has a limited audience, coming from underground clubs and pubs.

Those who've seen Paanch find nothing objectionable about the film. Moreso since the filmmaker had asked for an "A" certificate. "There are many excessive and self-indulgent aspects about Paanch that you disagree with. The graphic depiction of how to roll a joint, for instance, is absolutely unnecessary. But it doesn't deserve to be banned," writes film critic Khaled Mohammed. "The film seems to have upset their own value systems," says filmmaker Sudhir Mishra, about the censors. Adds Kashyap: "It doesn't offer them a fairytale world. The characters could be their own kids."

Padmini Kolhapure, former actress and wife of the film's producer Tutu Sharma, feels the hard-hitting realistic element in the film might have irked the censors. "You can't have a song-and-dance film if you're tackling a real-life incident," she argues.

In fact, far from glorifying violence, Paanch questions its meaninglessness. "The decision is perplexing because the violence in the film is far less than in most of the commercial films," says Mishra. "The killings have been suggested, I've kept the dead bodies out of frame," says Kashyap. None of the "negative" characters are held up as role models. "No one's inspired by Luke," he says.

The leading lights of alternate cinema are firmly behind their young, debuting colleague. "What the censor board is doing to young filmmakers is totally brutal," says Mishra. It took four long years for Kashyap, who wrote Satya, Kaun and Shool, to find a producer to back his venture. The two-hour, 33-minute long film was shot in 40 days at a budget of Rs 1.5 crore and was readied for an October release. In vain.

Most filmmakers insist that a group of seven or eight individuals cannot decide what the audience should or should not watch. With free access to video, CDs, TV and the Net, viewers already have access to all kind of films anyway. Even though you may dislike the world of Paanch you can't wish it away. The solution? The censors should rate a film, warn the audience about its content—and leave it to the viewer to make an informed choice.

Where does Kashyap go from here? He's willing to make cuts as long as they don't harm the narrative. The film has been sent to the revising committee. If it too refuses to let the film hit the marquee, Kashyap plans to approach the appellate tribunal. "Paanch could be a beginning for a new cinema aimed at the niches," says Verma. Only if the moral police relents, that is.