Examines the events leading up to the 1962 Chinese invasion, an experience deeply etched in our psyche. 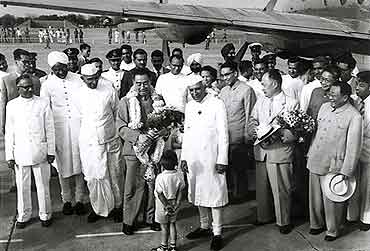 A Clash Of Political Cultures: Sino-Indian Relations (1957-62)
By Sudarshan Bhutani
Roli Books Rs 450; Pages: 282
A book on India-China relations is always a welcome break from our national fixation, Pakistan. This book examines the events leading up to the 1962 Chinese invasion, an experience deeply etched in our psyche. Although more a narration of events than a scholarly analysis, it brings out some interesting evidence. Nehru, who had bent backwards to please China, became the target of a vicious Chinese campaign portraying him as a "lackey of US imperialism". The war heaped humiliation on India when it least expected to be attacked. When Beijing finally halted, its ceasefire was conditional on the Indian military neither seeking to undo certain Chinese gains from the aggression nor setting up "more strong-points" in the western sector.

Bhutani doesn't explain why he chose 1957 as his starting point, other than he went to Beijing that year on his first diplomatic posting and India embarrassingly discovered that China had built a road through Indian territory. His title would have been better served had he examined events from when India and China became free. The clash was set in motion by China's 1950 annexation of Tibet, which brought Chinese forces to our frontier for the first time and bred the ensuing war. He errs in linking the Chinese ceasefire with the belated US decision to provide modest military aid to India. The dispatch of the uss Enterprise to the Bay of Bengal was not a "powerful signal" of US intention to intervene; US officials are on record as saying that it was sent to psychologically shore up the demoralised Indians. Oddest is his conclusion that China came out a loser from the war. Defeat not only transformed Nehru from a statesman into a beaten politician, it also undermined India's stature. The swiftness and brute power with which Mao managed to teach India a lesson boosted China's image and helped him to consolidate at home at a critical time. Success has a thousand fathers, while defeat leaves an orphan.