The Syrian prez is visiting India. He holds the key to peace in West Asia. 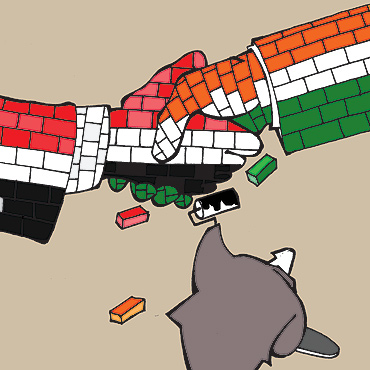 Next week, India will play host to the head of one of the most secretive states in the world. Syrian president Basher al-Assad arrives in Delhi on June 17. The visit has raised eyebrows in the drawing rooms of Delhi. Isn't Syria the Baathist state that's been funnelling Iranian arms to the Hezbollah in Lebanon, allowing Al Qaeda terrorists to pass into Iraq, and hosting the military leaders of Hamas in Damascus? Why is our government needlessly endangering its relations not only with the US, but also our most steadfast military ally, Israel?

Some observers will dismiss al-Assad's visit as ceremonial. Cynics will conclude that inviting him is a part of the ruling Congress' efforts to repair the damage done to its relations with Indian Muslims by its support of the US against Iran at the iaea, and by the Indo-US nuclear treaty. But Delhi's invitation to al-Assad is neither ceremonial nor self-serving. It is the renewal of a tie that had been vigorous in the anti-colonial Bandung era (1955-65). Pt Nehru visited Syria twice in 1957 and '60. Rajiv Gandhi did so in '88. Damascus has a street named after Panditji—not a minor street but a four-lane boulevard that links one of the wealthiest parts of the city to its centre.