River Of Books For A Dry Land 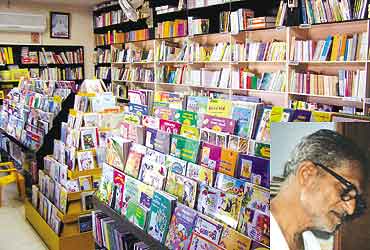 outlookindia.com
-0001-11-30T00:00:00+0553
His mission is to offer literature from across the world at rock-bottom prices. The octogenarian Mahendra Meghani, son of renowned Gujarati litterateur Jhaverchand Meghani, has made thousands read literature and buy books. His Lok Milap Trust has been providing quality literature to Gujaratis at incredibly low prices. "Gujaratis have a reputation as reluctant readers. I’ve proved this to be a myth by making available quality literature at their doorstep at very affordable prices," says Meghani.

The first collected volume combining the works of Gujarati, Indian and foreign writers, called Ardhi Sadini Vaachan Yatra (A 50-Year Journey of Reading), netted a sale of 50,000 copies in the first year of its publication in 2003. The growing demand egged on the Lok Milap Trust to come out with the second volume, which too sold some 20,000 copies in a few months. The third volume is now in print. "Our plan is to publish five volumes containing some 1,000 works of 500 writers," he says.

The USP of these volumes is the price. Meghani says ordinarily one such volume (hard-bound, 652 pages) would cost Rs 350, but Lok Milap is selling it for Rs 75. If you buy ten sets, the price is just Rs 50 per volume. In addition to Gujarati writers, there is also an assortment of Indian and foreign writers—from Umashankar Joshi, to Robert Frost, Rudyard Kipling, Leo Tolstoy or Franz Kafka—all in Gujarati. "There’s no selection criterion. I’ve included writings which I like," grins Meghani.

For those who find these books voluminous, there is a five-part series, Rojerojni Vaachan Yatra (Daily Reading), in the form of booklets priced at Rs 7. The trust has also made forays into publishing books in English, making available an abridged version of The Prophet (Kahlil Gibran) for Rs 10, Hundred Poems containing one poem each of 100 US and UK poets for Rs 20 etc.

How did they pull it off? Aren’t they making losses? Explains Meghani: "We did the opposite of what all publishers do. We announce the theme of the book we plan to publish and only after we get orders do we start printing. Before starting out, we appealed to those interested in literature to give us interest-free loans. We didn’t want much and requested a loan of Rs 100 from each reader. Later we announced we will print 75,000 copies if we get as many orders. We got the orders," he says.

The trust as a publisher almost functions like a reader’s cooperative and has gone a long way in bringing world literature to Gujaratis. The production quality may not match that of big publishing houses and the covers may not be glossy, but Meghani’s books are good enough to lure readers.

Meghani’s tryst with literature started on January 26, 1950, with Milap, a 50-page Gujarati monthly evolved on the lines of the Reader’s Digest. Milap would publish articles, essays, poems, short stories and book reviews. "Everything in abridged form. The writings in Hindi would be presented in the Gujarati script," he says. The monthly, at an annual subscription of Rs 6, continued till 1978, and was closed for nine months during the Emergency. Later it folded up.

Meghani still operates from his hometown, Bhavnagar. After the monthly closed down, Meghani undertook "reading sessions" across Gujarat. He would interact with readers of Milap and read books to them, "Everything nice that I had liked; it could be poetry, articles, essays and stories," he recalls. When Outlook contacted his son Gopal for a photograph, he had this to say: "My father believes in reading and hates the idea of his picture in print." Meghani can be contacted at: Lok Milap Trust, Post Box 23, Sardarnagar, Bhavnagar—364001. Tel: (0278) 2566402. email: lokmilaptrust2000@yahoo.com

'We Have To Accept Ground Realities'