Pre-poll, a hardline Rajnath has Mulayam for competition 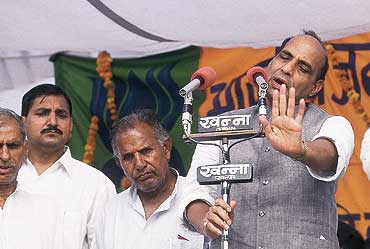 outlookindia.com
-0001-11-30T00:00:00+05:53
For once, UP CM Rajnath Singh and SP chief Mulayam Singh Yadav were in accord. Shortly after the attack on Parliament, Yadav publicly called for strikes on terrorist training camps across the LoC. Singh was busy telephoning the prime minister, home minister and defence minister, with a similar demand.

Singh emerged as a major BJP hawk. Following up on his phone conversations with visits to the capital on December 17 and December 20, he reportedly lobbied with the government for aggressive retaliatory action against Pakistan-backed terrorism.

Hawkish sentiments were expressed also at the BJP parliamentary party meet on December 17. And when the RSS’ Madan Dass Devi met the PM at 6 pm the same day, he conveyed the pro-aggression sentiments of People of Indian Origin (PIOS) worldwide. The Hindu Swayamsevak Sangh and affiliated organisations had held meetings in Dubai, London and Washington and more than 350 angry e-mails had been received at Jhandewalan.

At the BJP’s central office-bearers meet on December 18, it was agreed that an aggressive patriotic campaign should begin. When troop movements start in response to Pakistan’s build-up at the borders, BJP units should welcome soldiers at various railway stations with tilaks and garlands. Another option discussed was stepping up recruitment in the army.

Like the BJP, the SP had planned to capitalise on nationalist sentiments in the UP elections. Fake coffins were to be paraded in the run-up to the poll with the slogan "kafan-chor, gaddi chhor (coffin thief, leave your seat)", referring to the "coffin scam".

The party is keen on action due to the general feeling (as a senior BJP MP put it) that "inkay bas ki baat nahin hai (the BJP can’t handle it)". The tame surrender to the Kandahar hijackers earned us the stigma of being a "soft state" and the Agra summit was a flop, he said. But although the mood favours retaliation, both the RSS and BJP say the government’s decision would be accepted without question.

An aggressive action, though, could become a political compulsion. CPI(M)’s Nilotpal Basu points out that "the BJP is in danger of becoming a prisoner of its own rhetoric". So, while the PM’s speech in Parliament has been variously interpreted, his own party’s preferred interpretation is that India will choose its own time, terrain and methodology for a counter-attack.