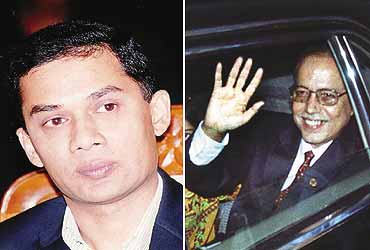 In Bangladesh, the president is just a ceremonial figurehead of the republic. Former president Shahabuddin Ahmed has aptly summed up his job: "I don't have anything worthwhile to do except offering prayers at the mazars." But even this innocuous action can incite the political class into plotting his ouster, as President Baddruddoza Chowdhury's recent resignation testifies.

Prof Chowdhury, 71, a renowned physician and a gifted orator, resigned after the parliamentary wing of the Bangladesh Nationalist Party (BNP) adopted a resolution condemning him for his alleged disrespect towards Gen Ziaur Rahman, the slain founder of the party, and even threatening an impeachment motion. What miffed the party bosses was his refusal to offer prayer at Gen Zia's mazar on his death anniversary on May 30, and the omission of his name as the "announcer of independence" in the president's message the same day.

Independent observers, however, feel the president only upheld the dignity and impartiality of the highest office by his refusal to lay wreaths at Gen Zia's mazar. The president took this decision to avoid the embarrassment of extending the same respect to Sheikh Mujibur Rahman on his death anniversary, something the BNP stalwarts could have never accepted. The Bangladesh polity is bitterly divided between BNP supporters who claim Gen Zia announced the liberation of the country, and their detractors in the Awami League who argue it was Mujibur Rahman instead.

Chowdhury, the BNP's founding secretary general, was disappointed at the party's response. "I could have stayed on. But I decided to resign for the greater interest of democracy. It's sad that no senior party leader ever bothered to contact me for any clarification.... If I hadn't (resigned) the situation could have gotten worse," the outgoing president declared.

His cryptic remark only...