Identity politics appears to have run out of steam. Separately, there is the fallout of economic policies bringing new contentions to the fore. 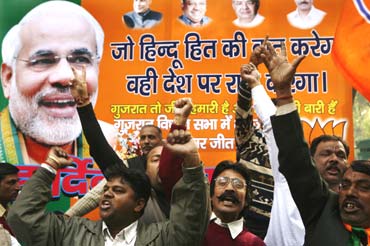 outlookindia.com
-0001-11-30T00:00:00+0553
For many years now, the politics of caste and religion have seemed to be the only mode of doing politics in India. In the emblematic political events of 2007, however, these have been less conspicuous in the busy shop-windows of our political marketplace. While caste and religion are, and will remain, important markers of social identity, it looks as if the usefulness of such identities as instruments of politics has plateaued and may even be declining.

The Gujarat election signalled a departure from the past when caste quotas and caste coalitions largely determined how people voted. It was anticipated that the alienation of two caste groups—the Leuva Patels and the Kolis—that together account for an estimated 30-40 per cent of Gujarat’s voters, would be decisive. But both Keshubhai Patel’s sulks and the rape and murder of two Koli girls proved to be inconsequential in the face of broad middle-class (and diasporic) support for Modi’s much-vaunted developmental performance. No wonder, media reports of exit polls were supplemented with the bets placed in the satta bazaar!

In Uttar Pradesh, the cauldron of caste politics in recent years, Mayawati’s election was by any reckoning a stirring moment: a historic first for a Dalit party coming to power on its own. As the Dalit vision of wresting state power from the upper castes was realised, the latter’s address should properly have been the dustbin of history. Instead, they were an integral part of the BSP’s victorious programme of ‘social engineering’, by virtue of which the Manuvadi Brahmin, historically and canonically the primary caste enemy of the Dalits, became an ally, while the ritually closer Shudras were politically distanced. Lesson: when the numbers don’t add up, it is not immoral to sleep with the enemy, just change the definition of enemy.

Finally, there is the curious case of the Gujjars in Rajasthan. As OBCs marginalised by the creamy layer, and threatened by the further inclusion of Jats in this category, they have been agitating to be reclassified as Scheduled Tribes—in effect a downgradation of their ritual status!

These events suggest that the law of diminishing marginal utility is beginning to apply to caste in politics. Either, as in Gujarat, it is irrelevant to even a landslide election victory or, as in UP, the political imperative to transcend its limitations is seriously heeded.

The uses of religion in politics have also lately become capricious. With the rss denying Modi grassroots support, the Hindutva plank was only belatedly introduced—and then weakly articulated—this year as compared to 2002. Ostensibly focused on development, this was actually a campaign riding on upper- and middle-class support of the Modi government for its contribution to their material prosperity. Not for these sections the guilt of 2002, for where economic interests trump civic values, aggressive communal propaganda becomes redundant. Consumerism can cohabit perfectly happily with casual communalism.

Again, the curious defence of Taslima Nasreen showed that the BJP has learnt to beat our professional but lily-livered secularists at their own game. The same people who brazenly justified the macabre mass killing of Muslims in 2002; filed cases that effectively exiled a 92-year-old artist; and vandalised the Baroda art school, became curiously solicitous about Taslima, anxious to ‘protect’ her, offer her hearth and home, and uphold her right to critique religion—not any religion, of course, only her religion, which is the object of their hatred in any case.

In stark contrast, the CPI(M) hustled Taslima out of Calcutta. The party of workers and peasants was already on the backfoot, having brutally turned upon its own people in Nandigram to procure subsidised land for capitalist enterprise. Not only did it wreak violence upon the hapless peasantry, but unwisely concentrated it on Muslim peasants. The rather unlikely combination of thousands of dispossessed peasants and one fierce feminist succeeded in eroding the credibility of the CPI(M) as the protector of the poor, the torchbearer of secularism and the defender of gender justice.

The instrumental uses of caste and religion in political mobilisation in India are at least as old as the British Raj. What is new is the sudden transparency of these uses, the alarming nakedness of the Emperor without his clothes. The loss of the finery and regalia of the imperial vestments is actually a frightening loss of innocence for the subjects whose faith in the legitimacy of their monarch derived from the gossamer illusion of his raiment. And so it is with the politics of identity, shorn of their caparison of virtue.

When the politics of identity becomes vulnerable to cynical manipulation by opportunists, they lose their sheen, and discredit genuine efforts to redress disadvantage through political action. Degrading forms of caste discrimination thus continue to be practised with impunity in UP even under Mayawati’s leadership. Students in a rural school boycott the mid-day meal ostensibly because it has been cooked by a Dalit woman; but it turns out that the local Samajwadi Party politician—under investigation for various offences—has instructed them not to touch it. Politics or caste? It’s hard to say any more.

But before the detractors of identity politics begin celebrating, we should note that this unaccustomed transparency that enables us to see through quotidian political hypocrisies leaves in its place a vacuum that is liable to be filled with cynicism and depoliticisation. Early reports from the Gujarat campaign documented the widespread political alienation and even fear that led citizens to express their reluctance to vote. Even in the absence of combative communalism, silent exclusion has much potential to damage a polity, and vitiate the possibility of a just society.

If, as the politics of 2007 suggests, the political uses of identity have climaxed, what should we expect to see emerging in their place? Nandigram showed us that it is possible for communists and capitalists to be locked in a close embrace, for capitalist elites to be delivered by the unlikely midwifery of a Communist party. It also hinted at the dark clouds gathering above special economic zones and other such initiatives that displace and dispossess the poor in large numbers. 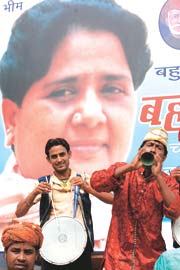 The UP election provided the astonishing spectacle of the return of the upper castes in and through the BSP. This culmination of the project of social justice and the empowerment of disadvantaged caste groups ironically came riding on an alliance with the old elites. The longer-term impact of this may not be immediately apparent, but a breaching of carefully constructed boundaries is already becoming visible.

The triumph of Modi, finally, demonstrated that the middle-class vote can trump the vote of the poor and disadvantaged, even though the latter are more numerous and generally turn out to vote in larger numbers. It also portentously demonstrated that an autocratic and managerial style of governance can appeal to voters desperate for ‘results’.

Identity politics appears to have run out of steam. Separately, there is the fallout of economic policies bringing new contentions to the fore. From the political disaffection of Naxalite violence to the UNPA consensus on farmers’ issues, such conflicts will eventually find reflection in the electoral process. It is certainly time to register, in these political shadow plays, the looming spectre of class politics.

Jayal is professor of law and governance at Jawaharlal Nehru University, Delhi