Karnataka CM Yediyurappa gets another lifeline. But till when? 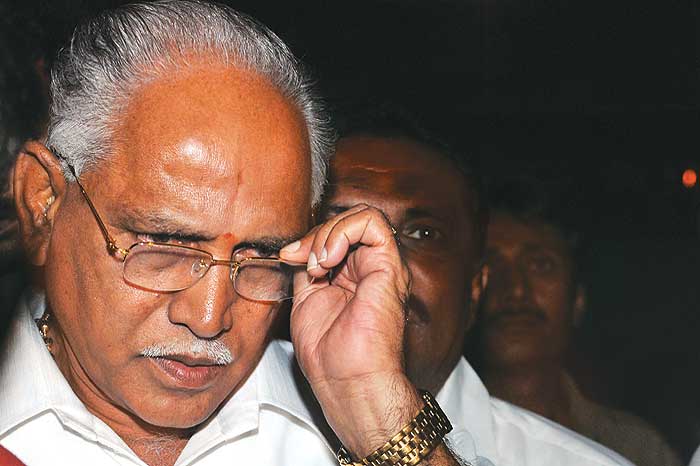 It was a pyrrhic second trust vote victory for Karnataka chief minister B.S. Yediyurappa on October 14. And it’s not just because of the cloud of uncertainty that hangs over him until the Karnataka HC decides on the disqualification of the 11 rebel BJP MLAs and five independents but also because too much fluidity has been introduced into the state’s political system over the last fortnight. But, for the moment, 106 MLAs have voted with the government while the Opposition could muster the support of only 100 legislators.

Assuming the court upholds the decision of the assembly speaker to disqualify the BJP rebels and permits just the independents in, the saffron government will be on a razor-thin majority of one vote (going by the division of votes on October 14). Even if all 16 are disqualified, Yediyurappa will still be on shaky terrain given the mood within his party and the shadow of rebellion bubbling just below the surface.

There is also an outside chance that the court rules in favour of the BJP rebels, which may embolden a few more within the party fold to express their dissatisfaction. This will in turn necessitate another trust vote which will surely ensure the  government’s collapse. An indication of this was given during the second trust vote on October 14, when opposition leader Siddaramaiah murmured quite ominously, “There are more in the BJP with us, but we shall not reveal their names now.”

The rebels argue that the speaker was prejudiced, acting even before they committed any wrong.

In their petition to the court, the BJP rebels also pointed out that two names—of M.P. Renukacharya and Raju Gowda—were selectively withdrawn from the disqualification list though their defection was assumed even before the voting took place. What this means is that the speaker was prejudiced, acting even before they had committed any wrong. “We never left the BJP,” they have said. This argument gets strengthened after the BJP requested the speaker to disqualify Lingasugur MLA Manappa Vattal after he abstained from Thursday’s vote. “If in Vattal’s case the BJP could wait until the vote was over, why did they act in haste against the 11 rebels?” asks one of their confidants.

The case of the independents may be even more straight although the BJP calls them “associate members”. All this should be enough to give sleepless nights to Yediyurappa, unless he comes up with something drastic like a resignation or a recommendation to dissolve the assembly. Sources say on October 13 night the mood among the BJP legislators (corralled at a resort outside Bangalore) was one of “anger and disappointment”. This despite the confidence that they would sail through the next day’s trust vote. The anger was because they felt that bsy had “mishandled” the rebels, had demonstrated “no man-management skills” and had been fuelled solely by his “bloated ego”. The disappointment was for the BJP’s lost opportunity to “showcase its ability to govern, and govern well”. 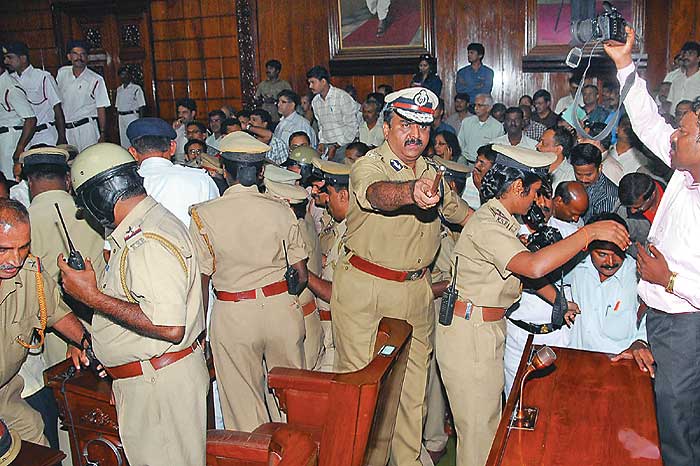 Cops try to control the fracas inside the Vidhan Soudha, Oct 11

Meanwhile, sources at the Sangh parent organisation RSS say it is contemplating a “total surgery” in Karnataka. A BJP source says, “When the Bellary Reddys rebelled in 2009, Yediyurappa had retained his chair only because the RSS had unflinchingly backed him. But that support is now on the wane. The RSS does not have a timeline, but it is thoroughly embarrassed by the actions of the BJP’s first government in the south. The middle-class’s loss of faith in the party has hurt them big time.” Apparently, after the Reddy rebellion, the RSS had also clearly asked Yediyurappa to keep his family away from the processes of government. Which apparently the CM has not been able to do.

Meanwhile, in the opposition Congress camp, there is an undercurrent of unhappiness with the party high command. “We didn’t know while all this was happening (second trust vote). They led us up the aisle when the rebellion began a week ago and then suddenly abandoned us. Our understanding was that the high command was all for destabilising this corrupt government. If they had practical difficulties, why didn’t they tell us before?” one of the legislators lamented.

“The Congress high command led us up the aisle when the rebellion began and suddenly abandoned us.”

A senior Congress functionary, though, tended to side with the high command, “How can we form a government with an assorted bunch of 11 BJP rebels and five independents? They have tasted power and money and they’ll demand the same from us. They are all habitual party-hoppers. How can we run a stable government? If that wasn’t enough, how do we trust the JD(S), which pulled the rug from under us in 2005 and helped establish the BJP in the state? Governor’s rule would have been most appropriate, but what if we can’t get it ratified in the Rajya Sabha where we don’t have the numbers.”

Another veteran leader disagreed though, saying a Congress alliance with the JD(S) was inevitable. “We have reached a position in the state where we don’t have the support of either of the two major communities. The BJP has lured portions of the Dalit and backward class vote by funding their seminaries and giving them land. One may argue that we still have the Kuruba and minorities vote, but then, Kuruba votes alone are not sufficient to get us back to power. Plus the JD(S) has a following among the minorities. So what is it that we are left with?”

According to him and many others, the Congress cannot risk getting to a stage where they are reduced to what it has  become in Bihar and UP, where it barely manages double-digit strength in the assembly. The problem, they feel, is that those who can’t even win a municipal election on their own are advising the high command. “Like the Congress-ncp alliance in Maharashtra, we have to view ties with the JD(S) as only a strategic one. What is also destroying us is the insider-outsider debate. Let’s be practical...Siddaramaiah is the only mass leader we have who isn’t scam-tainted,” adds the leader.

Finally, the mood in the JD(S). They feel betrayed by the Congress after all the hard work put in to throw the BJP out of power. As a source close to the Gowda family put it, “Kumaraswamy sullied his hand trying to handle the rebel BJP MLAs. The Congress took the high moral ground as always and left the JD(S) in the lurch. Still, one should appreciate the fact that a leader with just 28 legislators held centrestage and destabilised a majority government.” And on such small things lie the fates of governments.

Radish On The Rooftop