Under pressure, the government plans to cut numbers in the army 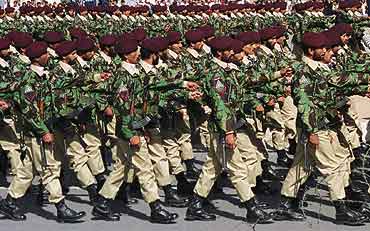 outlookindia.com
-0001-11-30T00:00:00+0553
In the corridors of power in Pakistan, officials are excited about the military regime's plan to downsize (or rightsize, as some call it) the army, turning it from a conventional one into a lean, strategically deployed force. The primary aim is to retire a large number of army personnel, which would go a long way in slashing the mounting administrative expenditure and boosting the struggling economy.

Already, "letters of thanks" have been issued to some of the army officials shortlisted for being relieved. This correspondent has seen quite a few of these. Government sources say financial advisors have almost finalised a reforms plan for the civil and defence services, hoping to effect a two per cent cut in the payrolls till 2004. Says a source, "The civil and defence service reforms are a key issue for the multilateral donor agencies-funded programmes, under which the World Bank has promised a new loan to Pakistan. Several army officers and jawans will be offered perks for a premature retirement. Preliminary work on listing those who are to be laid off has already begun."

Finance ministry sources say the army is being rightsized to steer the country out of the economic quagmire. "Our establishment is under tremendous pressure from donor agencies to decrease spending on defence and divert funds to the social sector. Monetary agencies usually point to the figures the armed forces consume in terms of the gross national product. And Pakistan lacks a worthwhile counter-argument, except in citing the cause of Kashmir, for maintaining such a huge army."

These officials say the rationale of maintaining a huge, conventional army doesn't exist as Pakistan now has the protection of the nuclear umbrella. What the country needs, they feel, is a lean army equipped with state-of-the-art technology.

But Maj Gen Rashid Qureshi, director-general of Inter-Service Public Relations, denies such a plan, claiming that no donor agency can pressure the regime into compromising national interest. He also says that the "letters of thanks" issued to army personnel was routine. Says Qureshi, "The Pakistan army's service review boards (srbs) sits every year to decide, among other things, the cases of dull officers. It's a constant exercise, there is nothing new in it."

Yet, Qureshi says that General Musharraf has repeatedly stated that he is trying to increase Pakistan's economic capability. "We need every penny we have. That's why the chief executive is very careful in spending money. As for the defence budget, we want to cut expenditure, but without jeopardising our defence capability... we cannot downsize unless the Indians do too."

The proposal to downsize the army was first suggested by the Sharif government in 1998. The Musharraf regime, on its part, has already taken some concrete steps. For the first time in the country's history, the defence budget for 2001-02 was slashed by 1.39 per cent, or Pakistani Rs 1.86 billion. Even so, the total defence expenditure, including pensions, is Rs 157 billion. And the 1.39 per cent cut can only be met through laying off army personnel.