Advani's BJP hitches its wagon firmly to the seer issue 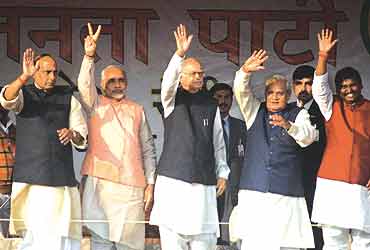 outlookindia.com
-0001-11-30T00:00:00+0553
There may be no light at the end of the tunnel, yet the BJP continues to hurtle down the path of Hindutva quite fearlessly. The shrill stance on the Kanchi Shankaracharya issue is yet another instance of the BJP clutching at every 'Hindu' straw. The great Hindu century may not have dawned but the wise men of the BJP have not lost their faith.

Party president L.K. Advani in particular appears to have concluded that the incantation of Hindutva issues is the best way to rally support in the RSS. So in a speech more suited to a VHP worthy, Advani told members of the BJP's national executive assembled in Ranchi: "Who has created this perverse intellectual atmosphere where anything associated with Hinduism, Hindu ethos and Hindu faith is considered communal and obscurantist? My blood boils when I hear the word toxic!"

So, with the blood roaring in his ears, Advani thundered on: "The manner of the arrest of His Holiness Jayendra Saraswati has jolted Hindu society like no other event in recent times. A section of the Congress, Communists and other political forces are conspiring to systematically erase the Hindu ethos of this country. But let every adversary be warned: if anybody tries to take the cover of secularism to indulge in anti-Hindu statecraft, the BJP will stand like a rock in their path, prepared to make any sacrifices."

If the "Hindu dharma is under attack", and the Hindu nation refuses to stir, blame it on the minorities. This is an old parivar propaganda trick usually adopted by the Modis and the Togadias. That the leader of the Opposition had to launch a tangential attack on Muslims and Christians is perhaps a sign of Advani's desperation. He said, "I ask the people of India to ponder why the Congress government apologised to a certain Muslim seminary when the IB had to raid the hostel to nab two isi terrorists?" There was more: "Why is raising one's voice against fraudulent conversions of poor tribals considered a communal act?" Advani's logic may be poor but the purpose is crystal clear: Hindutva will get its edge from some robust minority-bashing.

Although the BJP has learnt few lessons from recent electoral verdicts in India, in the backdrop of the Bush victory in the US, the Shankaracharya arrest has given the party an analogous opportunity to test Hindutva waters. Just as the red states in the US voted for guns and god and against "godless gays", the BJP is hoping there will be a backlash against the sort of "hyper-secularism" that led to the Shankaracharya's arrest. Says Murli Manohar Joshi: "In Tamil Nadu, there may be points to be scored in acting against a symbol of Brahminism but across the country there is a feeling that a holy man has been unnecessarily maltreated."

Because there are limits to the appeal of the Kanchi math, the BJP has roped in the evangelical Aastha and Sanskar TV channel preachers to spread the good word. Former finance minister Yashwant Sinha, just back from a US visit, told Outlook: "It was instructive to see that in the US the evangelical appeal for Bush worked in large areas. Ours is a far more religious society in which some areas are still sacrosanct with people. The secular press doesn't see this and their irreverence can invite a backlash." For good measure he adds: "There is aastha among people and Aastha channel is watched."

Several preachers including Sri Sri Ravi Shankar are condemning the seer's arrest daily in their sermons. And those who have actively participated in BJP protests include Asaram Bapu, Sudhanshu Maharaj, Swami Sureshanand and Kapalik Mahakaal Bhairavanand Saraswati, a black-robed tantrik known for eating food served on a human skull. The BJP leaders obviously hope to tap the Hindu soul with the assistance of such worthies.

But as Advani delivers fire and brimstone sermons from the pulpit, he may yet find that the ground has shifted under his feet. For, in the states of Bihar and Jharkhand where assembly polls are due, no local BJP leader believes that the Shankaracharya issue will click on the ground. Yet Advani has promised a "mass mobilisation on the lines of the Ramjanmabhoomi movement."

He is clearly mobilising support for himself within the Sangh parivar. Only then can Advani really take any issue to the people.