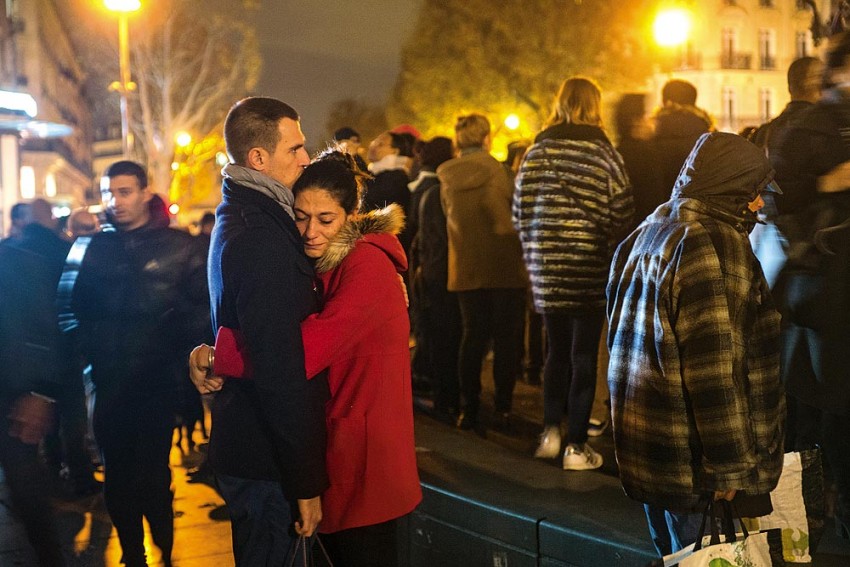 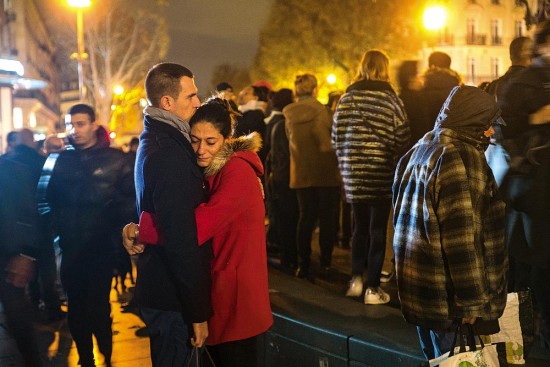 Compassion, sorrow. A pang of grief squee­zes everyone’s heart in France. I live with the man who runs the Paris public hospital sys­­­tem. All week I’ve seen dreadful messa­ges pour in: ‘My son, my sister, they wouldn’t be in one of your hospitals, by any chance?’ How many nos for a yes? So much distress in the sender’s SMS. Then, hours later, a new message glows on the screen: ‘We have located Valentin’s body; he was killed at Bataclan.’ He was 17. It was unbearable.

I was supposed to be in Bangladesh this week to attend the Dhaka Litfest, where brave young people are fighting for the survival of an open, cosmopolitan festival. But after the murders of the bloggers, many Western participants backed out. “Don’t go. Dhaka is dangerous,” they said to me. The irony of it.

For it was in Paris that blood finally spurted. A Bangladeshi friend wrote to me this morning: “The cancer of fanaticism is spreading. It’s the same everywhere. And don’t go thinking that we Muslims are suffering any lesser from it than you are. The Daesh/ISIS has killed more Muslims than non-Muslims in the world.”

I ask my daughter, Mathilde, to read this mail. She frowns. “Oh come on, they certainly aren’t the victims here.” I caution her against putting everyone in the same bag. I remind her of the contribution of the Arab civilisation to philosophy, medicine, mat­­h­e­matics. I hear that the Imam of Bordeaux is doing the same on the radio. I think of all the teachers who, too, will say this to their students this week. And I think how crucial this process is if we want to live together peacefully, because the Muslim commun­ity in France is quite sizeable, the largest in Europe. Yet, I feel that it’s getting increasingly difficult to maintain this line. “You said that already for the Charlie killings,” says Mathilde, rolling her eyes heavenwards. “But you can see perfectly well that goodwill serves no purpose these days...”

In the wake of the January attacks, several mosques were torched. More violence is feared. Anger is taking over not only the Front National voters, but also an entire generation. Young people who identify with the victims and are already being ref­erred to as the ‘Bataclan generation’.

Anger is taking over not only Front National voters, but an entire generation. Youth who identify with the victims are being called the ‘Bataclan generation’.

This feeling is growing, especially as it is taking root in a solid French tradition of Islamophobia. Every era seems to need scapegoats, and, after the Protestants and the Jews, it’s as if it’s now the turn of Muslims to be stigmatised. Mathilde readily acknowledges that. There were no students from a Muslim background in her preparatory classes—run by highly selective academies providing rigorous grounding to students for the elite grandes ecoles entrance exams. In class, while she’d heard of Spinoza or Verlaine, there had scarcely ever been a mention of Ibn Rushd or Mahmoud Darwish. As for the Algerian War of Independence, well, they had been pretty cagey, like the French can be about it.

My friend Nousheen’s mail continued: “Obama is right when he says that this attack against France is an attack against humanity and its values. But don’t the civilian deaths in Lebanon, Pakistan or Palestine also symbolise an attack against humanity? This year al-Shabab militants stormed a university in Kenya. 147 dead. All Muslims. Did that make ripples in the French press? I hope so....” There is a strong sense of double standards among the Muslims in France, as throughout the Arab world. But who recognises that? Who really cares?

Another scary tendency is putting terrorists and refugees in the same bag. We are being told incessantly that we are at war. As though the France that wants to laugh and sing is being pulled into a downward spiral of greater intolerance and greater belligerence. And, therefore, towards an increasingly less democratic France. According to a Figaro survey, 67 per cent of French people are ready to accept a non-democratic government, provided that it delivers on implementing necessary reforms. Around 40 per cent would go to the extent of supporting an unelected authority. What’s disturbing about this survey is that it was published before the attacks.

“Come on, Mum, you can see quite well that a line has been crossed,” says Mathilde. “This is the first time that kamikaze militants are operating in France. They didn’t act in isolation—they were super well-org­anised. They didn’t target a symbol but a particular demographic. This is a typical wartime tactic”. That’s true. And that’s probably what’s most disquieting. These fanatics go ‘beyond’ those who targeted Charlie Hebdo. They seem to be prey to a murderous urge that is increasingly devoid of any cause. It’s an obsession that revolves around and feeds on itself.

In September, I had published a novel on obsession. I sought to understand what cerebral mechanisms are at work when an individual is ‘in the grip’ of a pathology, ideology, religious fanaticism, etc. Neu­ro­scientists explained to me that the mental process was akin to that of obs­­­­e­­ssive­-com­pulsive disorders. A thought goes round and round in the patient’s head. It’s often an absurd thought from a rational point of view, but for the patient, it’s the truth. The patient needs this ‘truth’ and clings to it because it gives meaning to their life. Above all, they don’t wish to get better.

On Rue de Rivoli on the evening of the attacks, Mathilde had seen “four young beurs [Frenchmen of North-African des­cent] in a car, who were singing and heading for the Champs-Elysees, ready to pop the champagne!” This image had left her deeply shaken. At the traffic signal, a stone’s throw away from her, were young adults of her age, an ‘anti-Bataclan generation’ that was rejoicing. And whom bombs would surely make more determined than ever. Because bombs lead ine­xorably to the well-known vicious cycle of reprisals and reprisals for reprisals. A trap—cleverly sprung by Daesh/ISIS?—in which one knows perfectly well one could be caught for long years to come.

(Florence Noiville is a writer and journalist at Le Monde. She is the author of Attachment and Erotomania. Translated from the French by Sharmila Sarkar.)