Rhythm For Our Blues 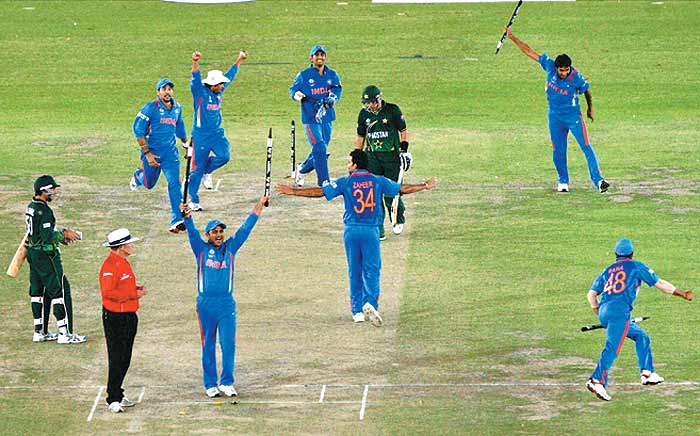 You place 11 men before a billion and order them to decimate the opposition. There would be nightly inquisition and men deemed to have made a mistake burnt at the stake. Grown-up men would fast for their success, or lead mobs to burn their effigies if they lost. Seemingly gods, they’d be used by advertisers to hawk a thousand products to the real god, the consumer. That’s what the Indian cricket team has gone through over the past five weeks of the World Cup. Tongues clucked over their bowling attack and fragile fielding. Batting was their great strength, but collapses in four matches in the group stage were seen as national tragedy, an ominous sign of things to come.

Yet, three days before the final, Mahendra Singh Dhoni was uprooting the stumps after India defeated Pakistan at Mohali. He was calm, unruffled, unhurried. Dhoni had been talking about “peaking at the right time”, and they did just that against Australia in the quarter-final. They fielded like devils, restricted the defending champions to a manageable score; when the going got tough in the chase, Yuvraj Singh yet again showed his mettle. Suresh Raina too put his hand up, and then carried that mood into the semi-final. That match didn’t live up to the hype—it was a game of low cricketing quality. The pitch changed its character midway into the Indian innings, and the Pakistan players were possibly overwhelmed by the occasion and the noisy, partisan—but well-behaved—crowd.

The Indians were clearly tougher through the event, overcoming several testing situations. Except for the remarkable West Indians and Australians, favourites have rarely done well in the World Cup. India, slight favourites among six dark horses, joins them. 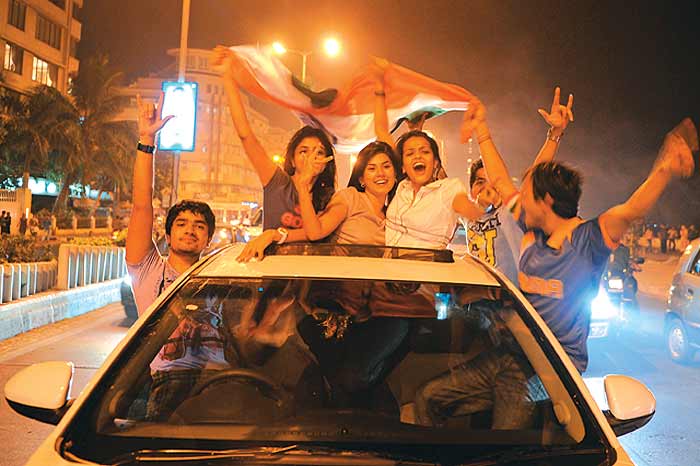 Fans in Mumbai celebrate the semi-final win. (Photograph by AFP, From Outlook, April 11, 2011)

This has led to the first all-Asia final. An Asian team has reached the final in each World Cup since 1992, Pakistan winning that year and Sri Lanka in ’96. The three large subcontinental teams were runners-up in Australia’s subsequent hat-trick of wins. Despite India’s performance, it remains No. 2 in ODIs, but the Cup confirms that India has combined its financial and cricketing muscle to become the superpower of the small world of cricket.

In purely cricketing reckoning, this has happened because India rose when Australia fell after a very long time at the top. “Yes, Australia has fallen after the retirements of their great players of the last 20 years, even if they’re still the No. 1 in ODIs,” Mansur Ali Khan Pataudi, former Indian captain, told Outlook. Australia never found their feet in this World Cup. Their pace attack was erratic, their spinners ineffective; Ricky Ponting, their anchor, was mostly broken; Shane Watson, the other batsman who has of late been winning them ODIs, couldn’t carry the team. They are no more the brilliant, foul-mouthed, confident scrappers of the past.

But India too hasn’t become the Australia of old. “I don’t think we’re there, I’m not sure if we’re on the right track,” Kiran More, former Indian player and chief selector, told Outlook. “Australia did it for 20 years, they won three World Cups, dominated Test cricket and redefined it. They beat each team at its home. We’re yet to do that.” He believes Australia’s strength is their competitive domestic cricket structure that produces very good, though not great, cricketers. “The Ranji Trophy is the key to Indian cricket, not the IPL or ODIs,” he says. “The Ranji Trophy needs to be more competitive, and the first step is to ensure the top stars play. Right now, we’re not getting many competitive matches.” 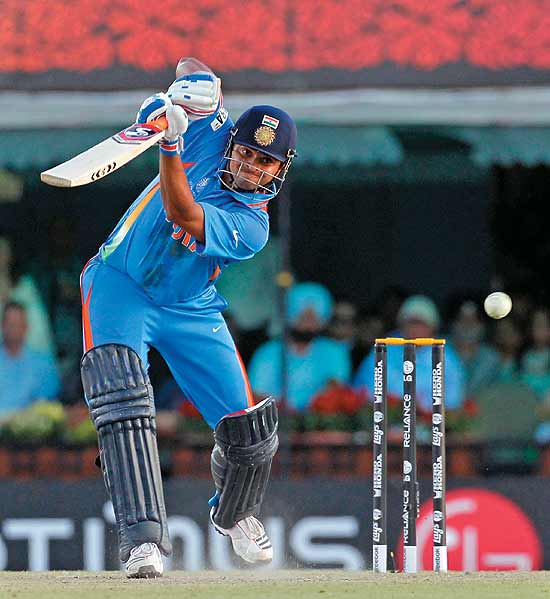 This is reflected in the fact that the same senior domestic players continue to be the best performers for years. More says there’s great talent in cricket’s hinterland, it must be found and nurtured, and states more than once that players like M.S. Dhoni, Suresh Raina, Munaf Patel, R.P. Singh and Piyush Chawla have come from small towns. “We do have the National Cricket Academy (in Bangalore), but we need to go deeper to identify talented boys, support and train them and give them opportunities,” he adds.

The field needs to be expanded. For instance, at the stadium in Mohali, very tall—six-feet-three upwards—young Sikh boys wear the police khakis, and often seem more athletic than the players they’re guarding. “Yes, these young men can be very good fast bowlers,” says Pataudi. “But they’re more into other sports in Punjab, like football, running, athletics, and should be encouraged to play cricket.”

India needs more men like Zaheer Khan and Tendulkar—this World Cup has shown, yet again, that the young blood is not quite boiling over with the sort of talent or zeal for the game these two have. Individual brilliance has powered India. Before the final, Tendulkar, Virender Sehwag and Yuvraj Singh had aggregated 1,185 of the 2,194 runs India scored—a staggering 54 per cent. Zaheer, Yuvraj and Munaf had taken 43 of India’s 70 wickets. Yes, a cricket team is the sum of its parts, but clearly six men seem to be pulling the others along, and they are hardly youngsters.

More is concerned about the lack of bowlers. “I’m worried that there is no rush of bowlers, especially left-arm spinners and leg-spinners,” he says. “And also the fact that fast bowlers slow down after emerging.” Adds Pataudi: “We’ve had the MRF Pace Foundation for nearly 24 years. What has it produced? One can recall only Srinath as their product. We’re going about it the wrong way.” The right way, he says, is to produce wickets that don’t kill fast bowlers.

But, as if by magic and skilful jugglery by Dhoni on slow wickets, India stormed into the final. It was estimated that close to a billion watched the later matches involving India. That would thrill the ICC and the BCCI, for eyeballs translate into revenues and, therefore, strength. Can the BCCI grow even stronger in consequence to India’s strong show?

“I’m sure it will be a kind of boost for the BCCI, but it can’t get any stronger, can it? It’s about as totalitarian an organisation can get,” says Mukul Kesavan, writer and academic. Kesavan is more interested in the domestic fight for the control of cricket. “Is this going to become a public sector-private sector fight over cricket’s destiny?” he wonders. “I think so, and I think there will be a compromise. The private sector is not really interested in Test cricket; it’s not that interested in any form of cricket except the IPL. And given how important (read money) this form of cricket is, it might become the pivot of a considerable struggle.”

The World Cup, Kesavan believes, has been an unqualified success, and the ICC can rightly proclaim that. Except for the minor matter of the fan. “It’s been a remarkable success, except for some very important things which would be done well in a civilised world, like ticketing and seating,” he adds. “We have had fans clamouring for the few tickets available, and then waiting for hours to get into the stadiums. This is beyond the abilities of our cricket board to even begin to consider.”

Sanjay Manjrekar says this team led by Dhoni is, like Tendulkar all his life, fulfilling high expectations. The administrators needs to follow suit.