It hasn't yet budged from its rigid stance, but Pakistan might be heading for a change on Kashmir 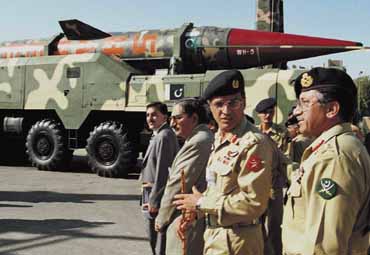 outlookindia.com
-0001-11-30T00:00:00+05:53
The ground is quickly slipping away from under the feet of the Pakistani government. And it knows this. No wonder there's now a belated soul-searching at the various echelons of power that control and determine the Kashmir policy, never mind the silence in public or the routine reiteration of old policies.

Yet there's no denying Islamabad's attempts to remove its blinkers. This is attributed, first, to the realisation that in any future move, the voice of the Kashmiris will be decisive. Second, Islamabad is perceived in the West, especially among the Americans, as "not doing enough" for the peace process in the subcontinent. Last week, for instance, US Assistant Secretary of State Karl Inderfurth reaffirmed Washington's support for what is now known as the Ramazan ceasefire. In Delhi, subsequently, he said Pakistan should seize the opportunity the ceasefire offers.

Inderfurth's statement has only imparted credence to the popular perception about Washington's role in resolving the Kashmir imbroglio. For instance, as Prof Khalid Mahmud of the Institute of Regional Studies says, "As a bitter Shiv Sainak said, the ceasefire move has no relevance to Kashmir, it is only intended to please the Americans." The rethink on Kashmir hasn't yielded anything concrete yet and the foreign office either remains tight-lipped or at best reiterates the old policy. Says a senior official, "There is no need to welcome the Ramazan ceasefire, things are happening and we are watching. Our position is that basically we will wait for further developments and see whether they at least lead to an end of the repression of ordinary Kashmiris and also to a dialogue in which both Pakistan and the Kashmiris will be included."

In other words, both countries are back to familiar posturing. New Delhi links talks to Pakistan with the stopping of "cross-border terrorism". Islamabad, as the foreign official says, would respond to the issue of sending ‘freedom fighters' into Kashmir only if the Indian repression in the state ends.

Currently, the Musharraf government remains committed to "talks with India at any time and any place". The feeling here is that instead of responding to Islamabad, New Delhi finds one pretext or another—cross-border terrorism or harping on Kargil—to avoid talking to Pakistan on the Kashmir issue. Home minister L.K. Advani's clarification that the ceasefire offer did not mean talks with Pakistan on Kashmir did not help bridge the divide. Officials also feel that instead of responding to Islamabad's offer of talks, New Delhi is attempting to split the various mujahideen groups by offering talks to those who have an interest in holding negotiations. Often these offers are made on the quiet, and some mujahideen groups accept to test the waters. Many in Pakistan see this as a strategy to woo the ‘influentials' inside Kashmir away from Pakistan and treat the Valley more as an "Indian" problem.

Also, as one commentator puts it, "The Kashmiri people on both sides of the LoC appear more united than ever before in their determination to take their destiny into their own hands and make a joint bid for attaining their common goal of self-determination." The Kashmir unification slogan gained fresh currency after Mirwaiz Umer Farooq raised this issue following his meeting with Gen Pervez Musharraf at the oic summit in Doha. (Abdul Ghani Lone, too, during his stay here talked to various Kashmiri groups.) The foreign office initially declined to comment on the Mirwaiz's call but subsequently told Outlook, "The UN resolutions for plebiscite is applicable to entire Kashmir."

The foreign office is also closely monitoring the Track II diplomacy that's in vogue this winter. But is Track II relevant to Kashmir? Says another foreign official, "Basically, it's a question of how you define it. If you think it is akin to the Oslo type of diplomacy, then the answer is no. The government is not at all involved in it the way Oslo had the blessing of the Palestinians and Israelis... There is no such thing as far as Kashmir is concerned."

The foreign office, however, does not discourage this type of diplomacy. "Of course, there is no immediate reaction from us but over time if a new development does take place, we will look into it. But has anything emerged?" asks the official somewhat cynically. Perhaps some day cynics on both sides of the border might have cause to keep quiet.

The Tenuous Line Of Peace