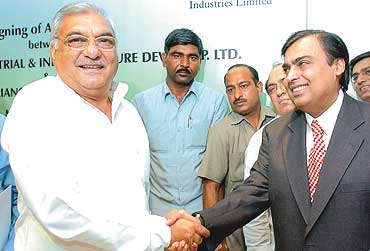 Initially, it was believed to be a breakthrough policy, which will help India create pockets of manufacturing excellence. A major reforms initiative that will create superior infrastructure to attract foreign and domestic investments—as is the case with China's Shenzhen, Chengdu, Zhuhai and Guangdong—on home soil. Unfortunately, it turned into a bitter battle between the commerce ministry, which initiated the idea, and the finance ministry which rejected it vehemently. Two staunch carriers of the liberal torch—P. Chidambaram, who fancies himself as a better reformer than PM Manmohan Singh, and Kamal Nath, who says he was single-handedly responsible for FDI in retail sector—went to war on the issue.

SEZs, or special economic zones, came to be jokingly known as special encounter zones in bureaucratic circles. Finance ministry officials criticised Kamal Nath's SEZ policy, and the FM launched a personal attack against it. Within the opposition circles in several states which were responsible for giving local clearances to SEZ proposals, it became a tool to strike out at those in power. Local politicians levelled charges of corruption against CMs in Haryana. For corporate observers, it seemed like another scam-in-the-making.

But things seem to have been sorted out now. Sources say Chidambaram's views have prevailed over Kamal Nath's. Almost all the objections raised by the FM are likely to be addressed in the amended policy, which will be cleared soon by the cabinet committee on economic affairs. In fact, it was supposed to have been taken up during the CCEA meet last Thursday (June 22), but was postponed at the last minute because of an unrelated hitch. A senior official in the commerce ministry points out that Manmohan Singh wishes to use the SEZ policy as an experimental ground to roll out job reservations in the private sector.

"The government is mulling with the idea of a 10 per cent reservation for SCs and STs in some of the proposed SEZs on a plot basis. That's why the announcement has been delayed," explains the official. Obviously, India Inc may be outraged by this reservation proposal. Industry associations like FICCI and CII have hinted there's no need for mandatory job reservations. Thus, the government will have to convince the business community, especially the foreign investors who are keen to set up manufacturing bases in the proposed SEZs, before inking the details.

One of the key concerns of the finance ministry was that several proposals to set up SEZs on small plots of 10 and 20 hectares were making a mockery of the policy. Officials felt such proposals were mooted by small and medium real estate firms, and could result in a land-grabbing scam. The new changes state that a multi-product SEZ can be constructed over a minimum of 1,000 hectares, and only those in the sunrise sectors such as IT, biotechnology, and gems and jewellery can be built on smaller plots of a minimum 10 hectares.

Not surprisingly, the land issue is proving to be controversial. In case of the proposed 25,000-acre SEZ by Mukesh Ambani-managed Reliance Industries in Haryana, the opposition parties and even members of the ruling Congress have hurled accusations against CM Bhupinder Singh Hooda. The genesis of the problem lies in the original SEZ, which was to be developed by the state government at Garhi Harsaru on an area of 1,700 acres. To pursue its plan, the state government purchased 1,395 acres from local villagers a few months ago at a price of Rs 20.75 lakh per acre, which was as per the rates applicable for land acquisition in the area. Once it decided to give a go-ahead to Reliance, it gave up its proposal and transferred this land to Reliance at the same rate. This created a furore.

Opposition parties like the BJP and Indian National Lok Dal, as well as the Congress MP from Bhiwani, Kuldeep Bhishnoi, said the 1,395 acres should be given to Reliance at prevailing market prices, estimated at Rs 60 lakh per acre. Although a showcause notice has been issued to Bishnoi by the state, he seems defiant. "I have asked the CM five key questions, but haven't got any replies. I am not against SEZs, but Reliance is going to set up a zone and then market the units within at market prices. So, if the state has acquired land at sarkari rates, it can't pass it on to a corporate at less than the market rates. We are not real estate agents,'' he says.

The villagers, who sold their land to the state earlier, are also incensed and have gone to the courts to get enhanced compensations. Their logic is that since Reliance is going to buy the additional land (over 23,000 acres) at market prices, they'll be at a disadvantage as they sold their land at much lower prices. So, they should be compensated for the difference in the two rates.

On June 19, Hooda clarified the interest of the farmers haven't been compromised. He said average land acquisition rates have been increased from an average of Rs 6.5 lakh per acre in prime Gurgaon locations in '04 to over Rs 20 lakh to the Garhi Harsaru farmers. "This reflected that the government was committed to safeguard the interests of the farmer," he added. State officials explained that HSIIDC, the holder of the 1,395 acres, has also benefited from the deal. Against the compensation of Rs 300 crore it paid to the farmers, it'll be paid Rs 360 crore by Reliance, which includes capitalised interest at 9 per cent and a 15 per cent administrative cost. In addition, HSIIDC would get sweat equity of 10 per cent in the proposed venture without having to pay a single paisa for it.

Besides the land-grabbing fear, the finance ministry had objected to services firms setting up shop in SEZs to avail of tax breaks. Sources say the changes will ensure services firms aren't allotted over 20 per cent of the available land. Also, old manufacturing firms which wish to move their plant to an SEZ to avail the tax benefits will be barred from doing so. Although the commerce ministry argued that even the existing firms need to move into SEZs to become globally competitive, and proposed that concerns regarding loss of revenues can be addressed by imposing a one-time entry levy, this was rejected. So were a lot of others.

In the end, what we'll see is a diluted version of the original policy. Despite this, it'll remain quite controversial if the job reservation clause is pushed through. Then, it'll be India Inc that'll openly oppose the SEZs.