A Parsi school for would-be priests in Mumbai rechristens itself, to avoid being targets in a riot 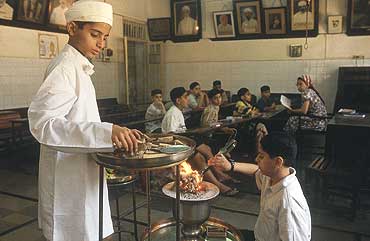 outlookindia.com
-0001-11-30T00:00:00+0553
Gurukul and madrassa are two words that you would never expect to see on either pillar of a building, particularly in the Dadar Parsi Colony, and in as combustible times as now. But that is what happens when you feel that the bullets and petrol bombs that ripped through Gujarat are about to ricochet through the foundations of your faith, as you study to become a Parsi priest in one of Mumbai's most peaceful neighbourhoods.

In this quiet green locality, where over 500 children have studied the Zoroastrian religion and graduated as Parsi priests or navars from the 'Athornan Boarding Madressa', the class of 2002 suddenly woke up one morning to find their school had a new name.

The 38 young students of ancient Persian languages like Pehlavi came out into the garden of roses and pomegranates and looked up at a sign that declared they were now the students of a 'Parsi Gurukul'. This sign, unlike the one that said Athornan Boarding Madressa, was not written in English, but in Hindi.

Ervad Dr Ramiyar P. Karanjia, principal of the institution, says after the Gujarat massacres, many trustees and well-wishers suggested a change of name—they feared the word 'madressa' might identify them with Muslims, unwittingly making them the targets in a riot.

How were they going to be able to carefully secede from the Islamic connotations and ward off potential attacks on this entirely non-Muslim educational institution? In reality, the word madrassa predates Islam. Dr Karanjia, a scholar of ancient Persian languages, explains that it is a Persian word documented from the Sassanian times (226-641 AD) when Zoroastrianism became the official state religion for the first and the last time. A part of parlance before the birth of Prophet Mohammed, a Zoroastrian priestly school was known as a madrassa or aerpatastan. But gurukul, they collectively felt, would bring them closer to a Hindu milieu while retaining their primary identity as Parsis. And in a legible turning point in Mumbai's history, the new signboard reveals a deepening dread of Hindu mobs felt by the unlikeliest of people—the soft-spoken and genial Parsi priests.

Ironically, this is despite having been favourably featured and co-opted by the RSS in their mouthpiece Panchjanya (a magazine of whose existence few Parsis would know of, let alone subscribe to or read). On the 40th anniversary of the Parsi Fire Temple in Delhi, while 80-year-old Scylla met schoolfriends after 30 years and the air carried a whiff of the fried fish that would follow the mewa-nu-achaar with wafers, Panchjanya photographers and reporters were there too, though not so much for the food as for a scoop.

A few days later while Scylla recalled the debate with her friend about whether it was surmai or rawas that was served at the temple, Panchjanya published a story about the Parsi patriots of India who had fled from Persia after refusing to convert to Islam and integrated into India like "sugar into milk". This was despite the Parsis celebrating their faith with 1,000-year-old rites and rituals they brought from Persia to India.

While they may have changed their language to Gujarati and dressed in saris worn Gujarati-style, their religion stayed sacred and ritually pure. Parsi priests—from the Sassanian empire right down to the class of 2002 at the 'Athornan-madressa-gurukul' in Dadar—continue to learn by heart the 83,000 recorded words of Zarathustra that make up the prayers, collectively known as the Avesta. All of them, children of priests (priesthood is inherited), wake at five in the morning, spending their days in prayer, learning the scriptures with recital and ritual. After noon it is time for general education and learning other languages like Gujarati, English, Avesta, Pehlavi and Farsi, as also Iranian history.

What's different between Sassanian times and today, though, is the pleasure and sport that the young priests-in-the-making enjoy—from Ervad Noshir Gowadia who represented Maharashtra state in boxing tournaments and others who returned as victors in cricket, table tennis, chess and track and field events. The younger ones wearing their black skull caps also love playing Free Cell, Nintendo, Gameboy and Sega on the computer and on video.

Even the menus here have a delectable ecleticism that you'd scarcely expect in a solemn seminary. A favourite evening snack is bhelpuri or sandwiches, and the occasional burgers from McDonalds. But true to their Parsi genes, lagan-nu-bhonus or wedding meals, from the famous Godiwala caterers, are looked forward to with forks and spoons ready to cut into steamed fish in banana leaves, fried chicken, mutton pulao and a delectable array of condiments.

But none of this takes away from the seriousness of their study—the rigorous scriptural training of memorising the manthra or the Holy Word of the Avesta. They also study for the SSC, doing formal abyas (which has the same meaning as it does in Sanskrit, studying with a teacher). Many navars or priests also go on to become lawyers, accountants, doctors or engineers, and others return to assist in the family business. Some become full-time priests, many others become part-time priests in fire temples tending to the holy fire in India and abroad.

Believing as deeply as they do in ritual and racial purity—through strictly intra-community marriages and temples—Parsis stand as far from Muslims, as they do from Hindus or any other faith. But, right now, for the 38 priests-to-be at the Dadar Athornan Boarding Madressa, the distance from communalist forces feels as close as that of a stone from a glass window. And one prays that the young priests will continue to study the four R's of religion, reading, writing and 'rithmetic without any disruption by another R, the RSS.