Reflections On A Box

That epic moment when we spotted ourselves on TV 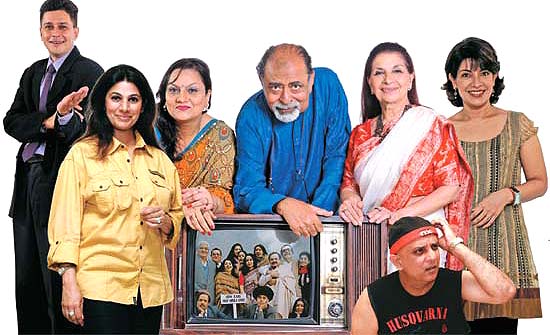 The most inspired thing about Hum Log was its name. These two words captured the essence of the show and what it meant for millions of viewers, texture intact. Hum Log was an account of both who we were and wished to be as well as of the times in which ‘we people’ lived. The year 1984 marks the eve of the birth of economic reform; it is the point of origin of a new generation as it moved decisively from one kind of world with its implicit set of assumptions to another. The serial also harnessed the power of television to provide that sense of collective intimacy that is a hallmark of the medium. By giving all of India (or at least the Hindi-speaking part) a common point of reference week after week in the confines of one’s home, it made all of us virtual neighbours eavesdropping into the lives of the cast. The sense of a shared destiny and a common set of questions united us in ways we had not experienced before. By bracketing our lives with those of the characters on screen, we created a community of shared concerns. With this serial began the construction of a emotionally unified India and a cohesive, relatively homogeneous market in a real sense.

It’s striking that of the three generations depicted in the serial, the ones that were the weakest belonged to what was then the present. Basesar Ram and Bhagwanti lived in a janta colony flat, both victims defeated by circumstances. Bhagwanti was the wailing wall of feminine submission, a woman who suppresses every instinct in order to make peace with the world, and yet is doomed to fail even in that endeavour. Basesar Ram is the quintessential Indian son, blessed with a father too wise and too blind, and a mother too indulgent of all his whims, who lives his life in an alcoholic haze of self-pity and delusional grandiloquence. The past, as represented by the Dada-Dadi, was self-assured, albeit in dramatically contrasting ways. Dadiji wielded the power of the Indian matriarch who, having paid her dues as daughter, bahu and wife, is free to regress into self-indulgent childhood, having no one left to fear. Both Dadaji and Ashok Kumar, the sutradhar-in-retrospect, were voices of patriarchal wisdom, steeped in the understanding that only the past can bring.

When we look back, the future, as represented by the five children and their issues, is presented with remarkable prescience. The themes that emerged from a pre-liberalised India have, in fact, been the dominant questions of the last 25 years. The children, barring the elder son, Lallu, showed ambition. They grappled with questions of career ambition, easy money, the lure of glamorous lifestyles and the burden of looks.

The programme began with a visible social purpose, but soon outgrew the tag, something that worked to its advantage. This loss of visible evangelism allowed viewers to engage with it in a much deeper and more real way. Letters inundated the programme, and Manohar Shyam Joshi, the script writer, used viewer feedback to shape the story, marking the arrival of interactivity in television programming. The success of Hum Log can be attributed in large part to its ability to make its characters speak in the voice of its viewers by mirroring their concerns and addressing unresolved and often unasked questions.

The serials of today work in a different way. Instead of getting inside the skin of the real, they magnify the real to make it spectacular. Hum Log’s studied realism has given way to a hyperreal depiction of epic domesticity where household strife gets rescaled to epic proportions. Everything is in 70 mm, even on the small screen.

Hum Log and its followers, Buniyaad, Udaan and its ilk, organised us into a single  audience. We settled in front of the television and allowed it to shape us. Ramayana and Mahabharat took this idea further as we morphed into a collective, even as we lived apart in our own homes. Twenty-five years on, Hum Log may seem like a piece of indulgent nostalgia but its impact has been much deeper. It helped turn India into a nation inhabited by ‘we people’. 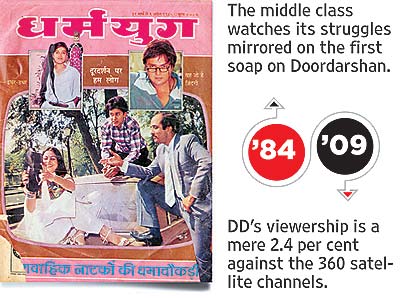 (The author is a columnist writing on everyday life and popular culture.)

‘We Were Clubbed With The Terrorists’