It’s a clear and present danger. Modi sarkar is diluting, amending, fast-tracking—India’s environment is at stake. 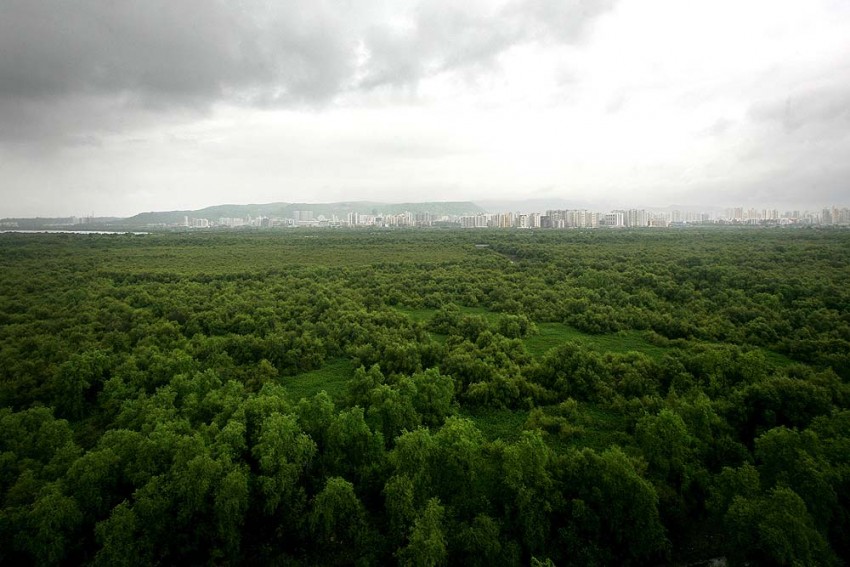 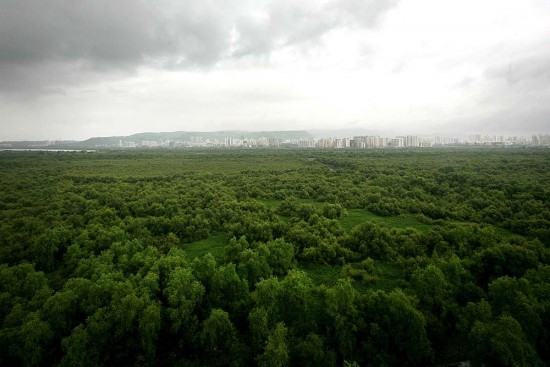 How The NDA Is Whittling Down Green Norms

For years the proposal to develop a second airport for Bombay at Navi Mumbai had been awaiting environmental clearance. The issue had been the rivers and the mangroves near the selected site. With one stroke, all the concerns—including the stipulation to create a mangrove san­ctuary—have been brushed aside by the Narendra Modi government. Late last month, Union minister of environment and forests Prakash Javadekar gave the green signal to the project on the condition that the mangroves should be made unattractive for birds, given their potential threat to flying aircraft.

“In effect it would mean destroying the mangroves to stop birds from nesting there,” says Ulka Mahajan, an environment activist. “The intentions are very clear now; it is all only about corporates. The government is happy to wipe out nature.” The move will also destroy fish breeding in the shallow waters of the mangrove.  “It is ridiculous to say you can plant mangroves,” says Girish Raut, environmentalist and expert on mangroves. “It took hundreds and thousands of years for ecosystems to evolve and it takes one project to wipe it out.”

The Navi Mumbai airport project is just one of the many instances that highlight the BJP government’s cavalier attitude toward environment in its desire to speed up mandatory green clearan­ces for projects. Safe­guards for land, water bodies and environment are being carefully dil­u­ted. The policies of the government are steering us to a situation that poses a clear threat to India’s green spaces.

Closely linked to speedy environment clearances for infrastructure and other projects are forest clearances and the proposed land acquisition bill. While the former is being tweaked unmindful of the damage to green belts, the latter is yet another assault on the rights of farmers and tribals who will have little or no say in whosoever wants to acquire their land for setting up an enterprise or infrastructure project.

“The NDA has indicated support to AP govt for completion of Polavaram, though clearances are still not available.”
M. Kodanda Ram, Political activist

It reeks of a clear pattern. In an analysis of one year of Modi sarkar, Centre for Science and Environment (CSE) director general Sunita Narain observed that incremental changes have been made to “ease the process” of project clearances. A major cause of concern, according to the think-tank, is the shift in responsibility of project clearances from the Centre to state agencies minus any capacity building or accountability. The states can now take their own decision on thermal power, irrigation, mining and other projects. Also, like many other development experts, the CSE has questioned the dilution of the public hearing process. Political activist M. Kodanda Ram points to the Polavaram dam project in Andhra Pradesh. Work started under UPA rule, despite violations galore—from not seeking public opinion, improper land acquisition to lack of statutory rehabilitation. In 2011, then environment minister Jairam Ramesh withdrew the environment clearance and stalled the project till the reorganisation of states.

“But now the NDA has given the state government indication of support for the completion of the project, though the clearances are still not available,” says Ram. “In this particular case, the damages to the forest and tribals who are going to be displaced is huge.” Both Orissa and Chhattisgarh have filed cases against the project in the Supreme Court.

A preliminary assessment by US-based Rights and Resources Group on the implementation of the Forest Rights Act has found a decided lack of effort to recognise the rights of forest-dwellers. Despite the law having granted traditional forest-dwellers community forest resource (CFR) rights, the study based on government data points out that so far “the total forest area over which CFR rights have been recognised is less than 5,00,000 hectares or barely 1.2 per cent of the CFR rights potential in the country”. 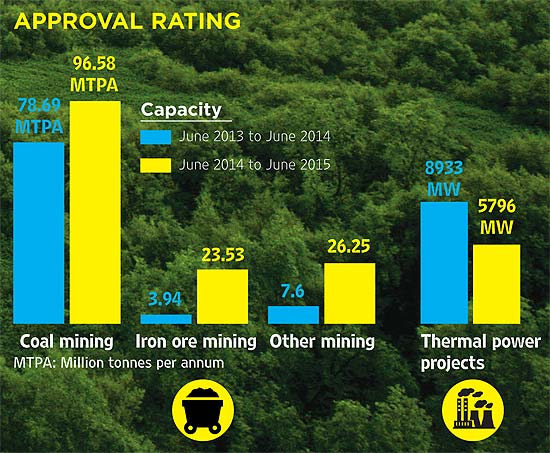 According to the Forest Survey of India, 1999, at least 40 mha of forest land, excluding around 8 mha of community forests in the northeastern states, are eligible for CFR rights recognition. “Evidence from different states clearly indicates the forest bureaucracy’s efforts to stall or subvert the CFR provisions of FRA,” says Kundan Kumar, the agency’s Asia director, highlighting experiences in AP, Chhattisgarh and Maharashtra.

“Mangroves will be destroyed to stop birds from nesting there. It is only about corporates, nature will be wiped out.”
Ulka Mahajan, Environment activist

Even as experts extol the political and economic benefits of granting FRA to both the state and forest-dwellers, the Modi sarkar seems more inclined to please corporates of all hues. What is more disturbing is that while India strives to assume a leadership role in global negotiations on combating climate change, it indulges in doublespeak that blames all voi­ces raised against government policies for stalling development.

In what is but a step up from the attacks during UPA rule, slowly but surely many of the civil society bodies known to work in the environment protection and forest rights space are getting edged out or sidelined. Javadekar assures this is not the case, the effort is to work with civil society bodies. “I want to foster all such pro­mising undertakings,” he says (see interview).

In the last 14 months, many among the projects cleared had been pending for some time and in some cases approved but not made known, according to official sources. In many cases, the clearances have happened only due to the amendments and dilution of many a rule that had been framed in the UPA regime to protect the rights of forest-dwellers or to safeguard the natural habitats of wild animals and protect dense forest covers.

A sampler of changes made in the rules shows how this is panning out (see graphic). Environmentalist Kanchi Kohli, who was part of a Centre for Policy Research study on environment regulatory reforms, says a lot of people feel that Indian environment laws need review to bring them “in alignment with current requirement. But review cannot be against protection of environment through dilution of process”.

In the last few years we have had several expert reports on protection of environment, with suggestions on ways to imp­rove the safeguards. This includes the report on the Western Ghats Ecology by the Gadgil committee. Another report on the Western Ghats prepared by the K. Kasturirangan-led panel seeks to bring just 37 per cent of the Western Ghats under the Ecologically Sensitive Area (ESA) zones—down from the 64 per cent suggested by the Gadgil report. Yet another report by a BJP-appointed committee headed by former cabinet secretary T.S.R. Subramanian last year looked at a plethora of legislative reforms to push forward the government’s agenda of balancing development demands with environment concerns.

The general view of the experts is that while the review exercise of various legislations is noteworthy, the keenness to dilute the authority of the National Green Tribunal and the provisions under the Environment Impact Assessment are some areas of deep concern. Leo Saldanha of the Bangalore-based Environment Support Group describes the BJP government’s decision-making on environment issues as “undemocratic”, alleging that Prime Minister Narendra Modi wants to “corporatise wildlife protection and forest conservation like in African countries where large track of land has been taken away from locals”.

“(Our environment laws) need review, but it can’t be against protection of environment through dilution of process.”
Kanchi Kohli, Environmentalist

Already, under the BJP regime, the gram sabhas have no say in linear projects like pipelines, railway lines, etc. “It appears that the government is rushing into diluting the Scheduled Tribes and Other Traditional Forest Dwellers (Recognition of Forest Rights) Act, 2006, to help the corporate industry capture forests without the need for a mandatory consent from the local gram sabhas,” says former economic affairs secretary E.A.S. Sarma. Through constant correspondence with the environment ministry officials, including Javadekar, Sarma has been urging the government to move with caution and not dilute the safeguards. He has also sought court intervention. 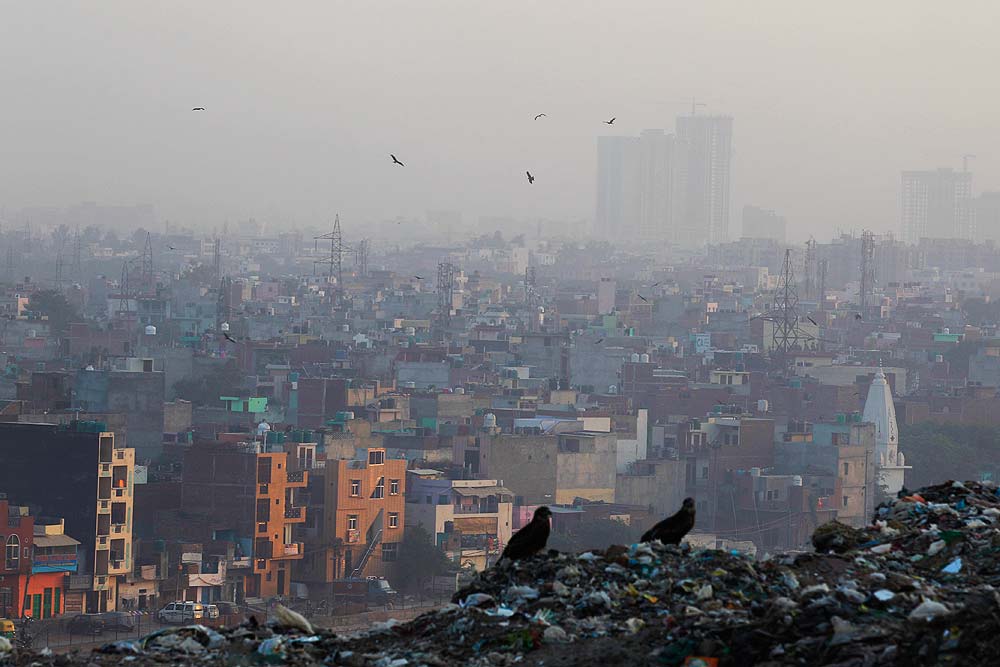 Deathly haze Blanket of smoke and dust over New Delhi

Environment lawyer Sudiep Srivastava says besides gram sabhas, even the important role of the National Green Tribunal is being diluted. This includes the power to review cases on merit basis (without the handicap of being location-specific) and not just locus standi. “The Subramanian panel proposal is spelling the doom of NGT,” says Srivastava.

In the newly bifurcated state of Andhra Pradesh, chief minister Chandrababu Naidu, an ally of the Modi government, has not just managed to get support for the Polavaram dam and 950 MW hydropower project but also for the proposed Andhra Pradesh Petroleum, Chemical and Petro­chemical Investment Region (PCPIR) in the Visakhapatnam -Kakinada coastal corridor. To be spread over 603 sq km, it would cover over 110 villages of Srikakulam, Visakhapatnam and East Godavari districts. The PCPIR, which was approved by the UPA government in 2007, would lead to huge displacement of farmers, fisherfolk and cause marine and soil pollution, environmental groups have constantly stated. 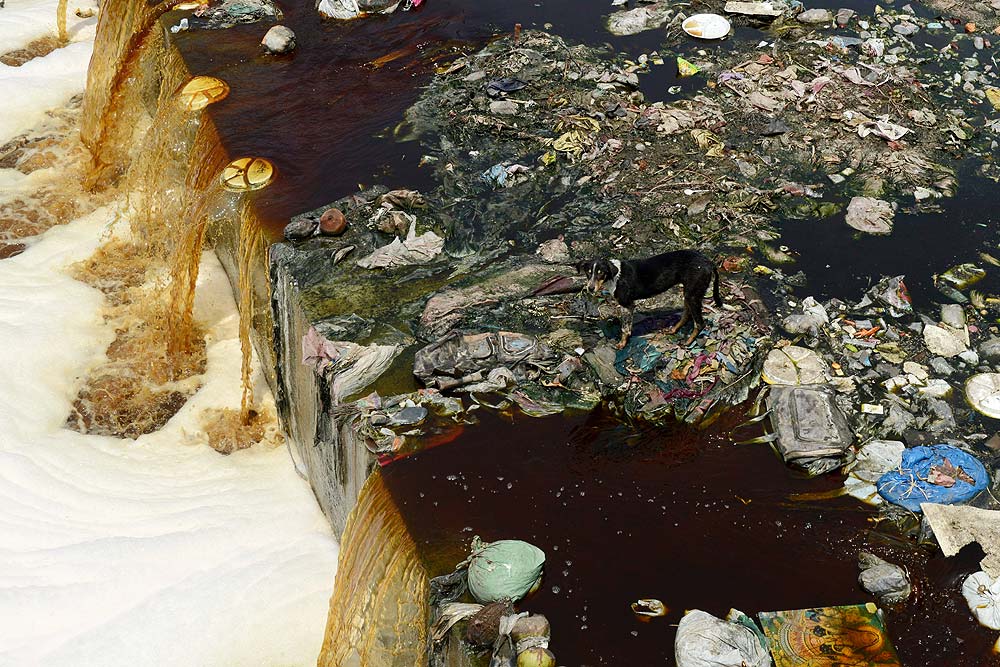 Foul flow Polluted water down a canal on Ahmedabad outskirts. (Photograph by AFP, From Outlook 10 August 2015)

Social activist Jeeviteswara Rao recalls that the NGT had cancelled the clearance to the Sompeta power plant in May 2012. At the time, the NGT had called upon the state government to conduct a mapping of ecologically sensitive areas while sanctioning industrial projects. Yet today, the same area is being eyed by authorities for the Sumitomo project which, besides an estimated 3,500 acres of land, would require about 8 TMC water from Gotta barrage on the Vamsadhara for its proposed power plant.

Across the country, there is hardly any state which is not grappling with some environment-related problem. Aru­nachal Pradesh parliamentary secretary for forests and environment Chow Tewa Mein is not too sure about the push to hydropower generation in his state, particularly the 3,000 MW multipurpose Dibang hydropower project which has been given the go-ahead by the Modi government. Twice rejected—in July 2013 and April 2014—this mega project, which is bigger than the Narmada dam project, is expected to affect several districts of Arunachal and Assam, and lead to displa­cement of thousands of families across 4,578 hectares.

While admitting that the “project will lead to certain development of the area”, Mein is not satisfied with the EIA studies conducted for most of the hydropower projects proposed to tap the 55,000 MW potential in the state bordering China. “We need more study on the river as its character differs from year to year. I feel the developers lack the knowledge of that,” says Mein.

Arunachal is just one example of the state of development that is being pursued unmindful of the consequences. “We don’t have a clear vision of what we want our environment to be like,” says Umesh Anand, editor of Civil Society. Anand contends that it is not just Javadekar who should be faulted as even in the past, environment ministers, including Jairam Ramesh, did nothing to clean up the processes in the ministry. While all governments have attacked the environment, the BJP is proceeding at breakneck speed. This is worrying indeed.

By Lola Nayar with Prachi Pinglay-Plumber in Mumbai, Madhavi Tata in Hyderabad and Minu Ittyipe in Kochi

The Case Of The Cross-Country Ordeals