With the Left shooting itself in the foot, it looks like a UDF run 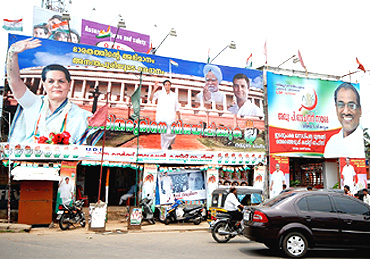 As the battle drums fell silent in Kerala on April 14, the Malayalam New Year or Vishu, an air of expectation hung over the Congress-led United Democratic Front (UDF). In the run-up to the elections, pollsters have been predicting a clean sweep for the UDF. Their forecast: a very healthy 15 for the UDF, five for the CPI(M)-led Left Democratic Front (LDF). One poll even gave 18 seats to the UDF and just two to the LDF, an exact reversal of the 2004 situation. For the record, both fronts have been claiming they will win all 20 seats. Senior Congress leader and former CM, Oommen Chandy, foresees a sweep like in 1977 when the Congress-led front won all 20 seats. Not to be outdone, CPI(M) state secretary Pinarayi Vijayan too has been telling all comers that the LDF would score a 100 per cent victory.

For the Congress, ‘20/20’ became the catchword as the campaign drew to a close. Many pundits though still feel that it will be a miracle, given the organisational weakness of the Congress. What accounts for the UDF confidence is that the ordinary voter is not in favour of the Left this time. A combination of factors, anti-incumbency and divisions within the ranks (capped by the never-ending tussle between Pinarayi and CM V.S. Achuthanandan) has left the LDF in a mess.