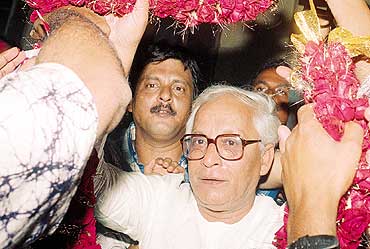 outlookindia.com
-0001-11-30T00:00:00+0553
The post-poll contrast in attitudes was telling. Here was Buddhadev Bhattacharyya, self-consciously waving away hordes of enthusiastic supporters at the Alimuddin Street party office. To newsmen, he outlined his priorities: better work culture and economic development. Finally, he requested the badly-mauled opposition for its cooperation, with no snide remarks against any of its leaders.

And there, Mamata Banerjee surfaced, after sulking for one whole day at her residence. The defeat clearly rankled but it only added to her high-pitched stridency. Instead of self-criticism and humility that would have been in order, newspersons were subjected to another harangue from a bad loser: everybody—the state government, the CPI(m) cadre, the central forces, the election observers, the nda government and the chief election commissioner—had conspired against her party and rigged the election. Ergo, Trinamul mlas would give the CPI(m) "tit for tat" in the state assembly.

The tirade shamed even her alliance partners. Congress leaders dissociated themselves from the unsubstantiated assertions against the cec. Ajit Panja, resident quisling in Trinamul ranks, hit the nail on the head: "She is talking nonsense, she has to accept the rout she has suffered. Why doesn't she take a break for a few days before opening her mouth?"

The Left Front, meanwhile, responded with humility. Biman Bose, CPI(m) politburo member and the mastermind of its intense three-month-long campaign, told Outlook: "I became certain of winning over 190 seats only 48 hours before the polls." Adds Left Front chairman Sailen Dasgupta: "We won more than we had hoped for." Bose, however, didn't elaborate that during those three months the party had campaigned intensely, covering each of the 300-plus blocks in the state, taking into account the latest poll statistics, talking to psephologists. Periodical reports were sent from the blocks to the district headquarters and to state and central leaders.

Even so, a state committee member said: "We hoped to win around 165-170 seats and were worried, mainly because of our performance in the 1999 Lok Sabha polls." He should have rested his fears. For, this time the LF polled a whopping 48 per cent of the total votes, reducing the Trinamul-Congress share to around 39 per cent and that of the BJP to only 5 per cent. This is in stark contrast to the 1999 parliamentary polls, when the figures were 46.79 per cent and 51 per cent for the Trinamul-BJP and the Congress. Says the cpi's Gurudas Dasgupta: "These figures indicate that the bjp has lost ground among the middle classes here too on account of its economic policies which hurt them."

Compare the Left Front's sustained and calculated campaign to that of the Trinamul-Congress combine's and it becomes clear why the voters rejected the latter. Mamata's unilateral pullout from the nda was as surprising as her hasty tie-up with the Congress, the party she had not so long ago derided as the cpi(m)'s B team. There was no public explanation for any of her decisions. The Trinamul manifesto was, at best, a poor joke to be forgotten. The Muslims didn't respond. The electorate was convinced that Mamata had lost all direction.

Then followed the prolonged bickerings over seats between the Trinamul and the Congress which led to a loss of almost 10 days of campaigning time. Sitting members were dumped in favour of rank outsiders whose sole strength was their proximity to Mamata's media advisors. Dissidents contesting the elections cost the alliance at least 25 seats, from Bongaon to Beliaghata.

There was also much heartburn over the manner in which funds were allocated for campaigning. Favourites flourished while others languished. The bjp cut into total votes, further adding to the alliance's woes in around 50 seats. As for pre-poll campaigning, there was no fixed plan to cover different areas or regions. At one point, CPI(m) state secretary Anil Biswas, wondering about the lackadaisical opposition, asked Congress' Pradip Bhattacharya: "I hope you will at least begin your campaign, there are only three weeks left!"

There was little doubt that people genuinely wanted a change but none of Mamata's gimmicks, not even the much-touted, unfulfilled Bengal package, impressed the electorate. Surrounded by yesmen, she underestimated the resilience of the organised and disciplined Left establishment.

In sharp contrast to her shrill campaign, the dignified canvassing by the earnest Bhattacharyya won over the alienated urban middle class. The Congress-Trinamul Congress combine could not win much support even from the 32 lakh young voters who voted for the first time in 2001. CM Bhattacharyya had clearly impressed everyone with his pragmatism and down-to-earth style of functioning. The net result: of the total 294 seats, the Left Front won 199 seats, leaving the Trinamul-Congress with 86.

So, what does the future hold for the Trinamul-Congress? There is not much to rejoice. Though they have denied it, there is much talk that Mamata's MPs might desert her. There is also some speculation that Mamata will have to either return to the nda or join the Congress. But that might not be easy since Congressmen in West Bengal are blaming her for the drubbing. nda convenor George Fernandes has said that Mamata was welcome to rejoin the alliance but it remains to be seen if she will swallow her pride and mend fences with Vajpayee.

With this defeat Mamata has squandered away all the public support that she had managed to drum up over the past three years. In Calcutta her campaign against the Left did find good resonance. But all that seems to be lost, as the Left made its first inroads into the city in a long time. With her credibility having taken a beating, Mamata has to introspect and take on the uphill task of regaining lost ground.