'Devdas' is Bhansali's film all the way—fresh and opulent 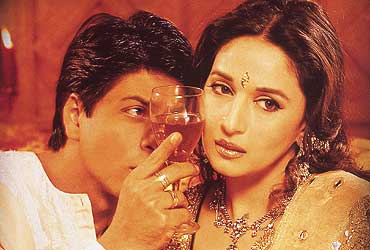 outlookindia.com
-0001-11-30T00:00:00+0553
Sanjay Leela Bhansali's Devdas is stunning by any standards. At the 55th Festival in Cannes, it is also a shock. Its scale, settings, costumes, dance and song sequences, exceptional even in Mumbai, are at startling variance with the restrained, bitter fare that audiences have been watching at this premier fest of world cinema on the shores of the Mediterranean.

Bhansali seems to have pulled it off again, with a largely non-Indian audience applauding at the end of the first screening. At his press conference, however, he made it very clear that he makes his films for an Indian and ethnic-Indian audience abroad, using the style of songs, dance and emotionally-driven stories that appeal to his people. Bhansali also said that he decided to make Devdas because he had grown up listening to his father talking about it, and also because the stirring novel by Sarat Chandra Chattopadhyay had never left him since he first read it at 17. It is still held in high respect, he said. Bhansali further claimed that he only altered the presentation style of the 1955 Bimal Roy classic, featuring Dilip Kumar, while retaining its essence.

The 165-minute film opens with a charged, prolonged preamble announcing the imminent arrival of young Devdas after completing his law studies in England. The hysteria stems mainly from the women elders of his household, a place whose lavish and ornate scale stretches credulity somewhat. Kaushalya, Devdas' mother (Smita Jayakar), and close friend and neighbour Sumitra (Kiron Kher) lead the gush and quivering. They recall the close friendship of their children—Devdas (Shahrukh Khan) and Paro (Aishwarya Rai, at her stunning best), when they were children. Flashbacks show the dawn of romance. Paro has carried an unextinguished lamp as a symbol of their love, dying only at the film's conclusion. When Devdas does finally arrive to meet his Paro, the film gains credibility and momentum.

The story is the familiar one of family opposition to a marriage of young hearts because of differences in socio-economic status. The young pair drifts apart. Paro stoically accepts a wealthy widower (Vijayendra Ghatge) with grown-up children. He says he will keep his distance because he still loves his late wife.

The far more vulnerable and complex Devdas leaves home. His friend Chunilal (Jackie Shroff) introduces him to debauched ways, first to the lovely courtesan Chandramukhi (Madhuri Dixit), who falls hopelessly in love with him, and then to the bottle. Devdas loses his moorings altogether while the two women who love him come together as friends to save him.

In a dramatically intercut train sequence, Devdas knows he is nearing death, and tries to honour a promise given long back that he would meet Paro one last time. Even this is not to be.

Bhansali imbues freshness and opulence into this well-worn love story. He has written layers of family intrigue, dissension and the roles that women play in a wealthy joint family living in Calcutta in the early 20th century. The screen canvas he works on is blindingly luxurious, with production designer Nitish Desai setting up glittering city landscapes and houses that mirror palaces—all built around a lake in Mumbai's Film City, with rapid-fire changes of gleaming bejewelled costumes.

The danger is that the mesmerising opulence of the film, at its Rs 50 crore budget, will distract from the emotional essence that lies at its core. The performances are uniformly good, with Shahrukh Khan skilfully giving his tragic, loser role the measure of dignity it needs. Madhuri Dixit and Kiron Kher give compelling, often passionate, performances. Aishwarya Rai is ravishing to look at, suitably appealing and credibly depicts the transformation of a little girl in love into a mature lady of a great house.

Devdas is Bhansali's film all the way. Says Shahrukh Khan: "The intention was to honour our greats in cinema. Hopefully this film will draw younger people to the earlier Bimal Roy version, and from that to the history of cinema we have grown up on".

Trade reports indicate that the world rights of Devdas have been sold to Focus International. With all its Indianness in content and style, this is a film that could show the way to winning major box office earnings at home and lucrative audiences abroad.

I Pray That India, Pakistan Go To War: Dar