Actors now want to look their role. Strong scripts and accepting audiences have reduced the pressure to be glamorous. Style is here and here to stay. 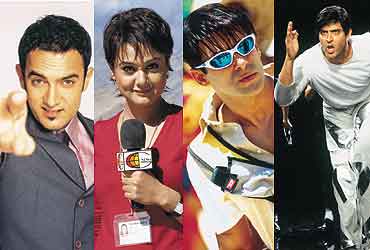 outlookindia.com
-0001-11-30T00:00:00+0553
When film publicity designer Rahul Nanda made black and white posters for Mani Ratnam's Yuva, he thought the "grungy" visuals would not work in north India. Another set of colourful ones would have to be made. But Mani decided they reflected the character of the film. So the now-famous posters stayed.

Some years ago, when hip came to settle in Bollywood post Rangeela, Kuch Kuch Hota Hai and then Dil Chahta Hai, oodles of coloured hair waltzed through endless 'young', 'cool' movies. But years later, men still go to salons asking for Dil Chahta Hai haircuts. The sameness of bubblegum scripts led to sameness of styling. And publicity. "They make very similar films and it's hard for the publicity designer to make them look different," says Nanda. But now, with strong scripts breaking through the Bollywood formula and more accepting audiences, style is making a happy resurgence, free from the pressure to be relentlessly glamorous.

"Actors now come to us wanting a look that will bring to life the character they play in a film and we work on it to create that," says Ryan D'Rozario who has created five different looks for Saif Khan in Hum Tum. The film spans eight years in Khan's life, where he starts out looking like the young laid-back cartoonist he plays, not a film star posing as one, and goes on to look different as he gets older. "Now we can bend the rules a bit and people will accept it," says D'Rozario.

Khan is not the only one bending Bollywood hero stereotypes to fit more life-like characters. Stylists say stars now do less of the running from set to set looking the same in each film routine. Aamir Khan who is playing Mangal Pandey in The Rising, grew his hair and moustache for more than a year to look the part. Says Slash Apeni, who styled the movie: "Most of the lead characters started growing their hair and moustaches months in advance to suit their role. We used their natural hair for styling and didn't need hair extensions."

Hrithik Roshan sported a baseball cap for months to hide his closely cropped army officer's head for Lakshya and Zayed Khan added an edge to his spoilt kid in Main Hoon Na role by wearing hair extensions. Stylists say that while actresses still can't get away with as much adventure as the men can, their looks too are changing because their roles have slowly evolved. Evidence: Kareena Kapoor's chewed-up red nails and cheap saree in Chameli, Preity Zinta's thick-rimmed glasses for her melancholic character in Kal Ho Na Ho, and her short crop for her turn as a TV journalist in Lakshya. Designer Manish Malhotra says the look now is, "real but nice. For Yuva, I was told that Kareena should look fashionable but her clothes were supposed to suit her middle-class Calcutta character. They were not designer labels from London."

Malhotra and others say the change is happening also because urbane overseas and multiplex audiences who are now driving the business want films and characters they can relate to. "The whole OTT (over the top) style was wrung dry. Now people want to see characters who live and behave like them," says set designer Sharmishtha Roy. Roy, whose Kabhi Khushi Kabhi Gham sets mixed bania baroque with sugar candy, built spaces that "would look like a house where those characters would live in" for the same producer's Kal Ho Na Ho.

"I am not selling glamour through my films anymore," says Malhotra. While Bollywood glitz has seeped into music videos and television, films are getting more real. The gap that once existed between overseas and smaller-town audiences no longer exists. Nanda says he often makes two sets of publicity designs for the two markets and Roy isn't sure if the multiplex-led sophistication will play out well in the rest of India.

But for all the much-needed infusion of reality, films still brim with women who look nothing like anyone you might spot crossing a busy road. That's because, say stylists, they get too little to work with. "You need to get the right project and set-up to do something different in," says D'Rozario. Says Roy: "There're still only a handful of different scripts around."

But where they do get well-defined material to work with, publicists like Nanda are perfecting the art of squeezing the essence of a film into a few seconds for promos and a snapshot for print advertising. For Main Hoon Na, Nanda created publicity booklets that looked like school notebooks; the lead stars wore sleeveless sweaters like in the film and sat on school benches for the music release. "The publicity gave a good sense that this movie had a little bit of everything and it's a masala film," he says.

A new breed of professionals are trying to get Bollywood more comfortable in its own skin.