A peek into Team India's exploits in Lahore's bustling scene 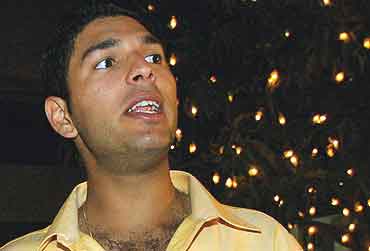 outlookindia.com
-0001-11-30T00:00:00+0553
As a Pakistani woman, I’m wary of Peshawar. I remember the nightmarish experience of shooting a television show in Peshawar’s Kisa Khani bazaar. My gay stylist got as much attention as I did; at times it got scary. On one occasion, we had a peeping tom hanging from the bathroom window of our hotel. But the Indian team decided to brave Peshawar: they were spotted shopping for Peshawari chappals and were understandably mobbed.

Their next stop was Lahore, the town about which old-timers say, "He who hasn’t seen Lahore, hasn’t lived." Its old quarters, similar to Delhi’s walled city, bustle with life. Here you have the infamous Heera Mandi, home to courtesans. Here lives Yusuf Salauddin, grandson of the poet Allama Iqbal, who has in the past graciously hosted guests like Mick Jagger, Bianca Jagger, Boney M, Rekha, et al. Lahore parties harder than Karachi but is paindoo, or less classy. You ain’t supposed to have arrived if you haven’t been to a party at the haveli of Yusuf Salauddin.

On the night of March 24, after India won the ODI series, Yusuf’s son hosted a party at the haveli. I strolled in at 1.30 am to find Imran Khan—quite surprising considering he has become a hermit from the time he stepped into politics. The party was in full swing; most Indian cricketers were there but for Tendulkar and Ganguly. The ladies and even some men couldn’t take their eyes off Yuvraj Singh. Everyone wanted to dance closer to him; what a mover and shaker! He spent the evening dancing with friend Vidya who too displayed some groovy moves on the floor.

The other team members were shy, and looked fascinated by the haveli and atmosphere. I talked to Zaheer Khan. He’s cute, and said this was their first party out. Methinks the Indian boys are just plain shy. Pop stars Sophiya and Ali Zafar delighted the crowd by singing live. Another Indian socialite, Queenie, was seen boogieing and mixing with the locals. Liquor baron Vijay Mallya was in Indian flag colours with Kingfisher embroidered on his shirt. It was great the Indian players weren’t hounded with undue attention and overbearing hospitality.

On the other side of town, Sabeene Saigol, the beautiful heiress and adwoman, had her own exclusive GT (get-together). The cricketers showed up at 2 am, perhaps the first indication they had thrown off the shackles. Also present here was Raymond Textiles’ Gautam Singhania whose raccoon-coloured hair had everyone thinking he may have fallen into a pile of bleach by mistake. He sure stood out stark amid the rest.

Imran Khan’s fund-raiser for his cancer hospital featured a concert by Daler Mehndi, and his guests included films stars Sunil Shetty, Pooja Bedi and Shatrughan Sinha, who received tremendous attention. The Quaid-e-Azam’s daughter Dina and grandson Nusli Wadia came down to watch the final ODI. Accompanying them was Nusli’s beautiful wife Maureen and their sons, Ness and Jai. Sabeene’s parents, Sarah and Manju Saigol, hosted a party for the Wadias. All the beautiful people from Lahore and Karachi were in attendance. Present was Mallya dressed like a 20-year-old: in jeans, a flower-collared shirt and diamond-studded earlobes. He reminded many of Puff Daddy. Attempts at networking were impressive. Nimbus Communication’s Harish Thawani was one smooth operator.

The city was agog with gossip. Shoaib Akhtar was seen dining an Indian lady in Lahore’s famous Cuckoo’s cafe. The lady, it’s said, is available for wedding dances for Rs 25,000 a night. Shoaib is slumming it out, isn’t he? Ha, ha, he’s certainly into extras! But his taste for cuisine can’t be faulted. Those Indians who plan to visit Lahore must visit Cuckoo’s. Located in Heera Mandi, it is owned by artist Iqbal Hussain who was born to a courtesan. He paints women from the mandi and was featured in Time magazine, which he proudly displays on the walls of Cuckoo’s.

Lahore was in festive mood right through the week. But there were party-poopers too. One Indian gentleman pulled me aside and commented "Lahore is like a bitch in heat with no dog in sight." He’s exaggerating, bitter at having been ignored.

(The author writes on style and society for The Friday Times, Lahore)

Because 'Life Itself Is Fixed'