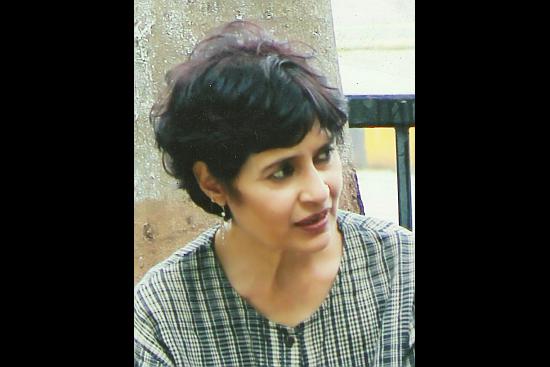 A Town Like Ours by Kavery Nambisan is in part an acutely observed, acerbic and hard-­hitting commentary on the tawdriness of progress. In part, it is a sorrowing lament on the human condition. It tells of a small town bursting out like an angry, festering sore from the surface of a once-calm countryside and of small lives spilling out their sca­lding grief, unable to contain it anymore.

The story is set in Pingakshipura, a fictional Karnataka village with an anc­ient temple, which has turned into a town courtesy its priest-turned-entrepreneur, the Sugandha Enterprises boss, who has set up a slew of units manufacturing agarbathis, detergents and pesticides. As a consequence of this, the waters of the town now run black with industrial pollutants and its children are born with a shock of white hair. Narrated by Rajakumari or princess, the retired town whore now occupying a small room in a corner of the temple, the story follows the complex lives of two families and a host of minor, very finely etched characters. There is Manohar, an English  teacher at the local college, and Kripa, his independent-minded artist wife and their childless but sexually fulfilling marriage on one track. A parallel track follows the story of Saroja and Sampathu and of two children, a boy with black hair and a limp and a girl with long silver hair—a faux family bundled and living together as a real one with an old taxi and bits of the pavement as their home. The two stories overlap and head towards a shared denouement.

The choice of Rajakumari as raconteur is a drawback. She knows too much, thinks too well on matters well beyond her ken.

That this is Nambisan’s seventh novel is evident from the fact that the writing is polished to a shine. The main characters are drawn in great detail, their physical and psychological attributes bared before the reader with a surgeon’s precision. Marriages are turned on their back, their soft underbelly dissected to reveal the throbbing organs and the messy coils inside and then deftly sewn up again. Nambisan is also a past master of the art of constructing cameo characters. Done with a seeming sleight of pen, she conjures up in only a few paragraphs characters that linger in the mind—like Snafu, the street urchin with a penchant for Tiger biscuits, or the Sugandha boss, the Brahmin with a chiselled nose and fair skin—but with a Vaishya heart “clad in high quality Raymond’s”—or Ghulam Bhai, the virile and oddly sentimental town Lothario otherwise known as ‘Lectric Mamu’ or Devaraya, the dodgy bonesetter with one critically botched up case in his past.

The main elements of Nambisan’s style combine a sharp, cutting sarcasm around issues of urbanisation and environmental loss, combined with a wry, affectionate irony when dealing with the lives and foibles of her characters. The story starts off as a grim, gritty too-real tale of ordinary lives but slowly veers off into somewhat surreal territory. The two elements don’t blend seamlessly but rather stand suspended together like a colloid solution, colourful and interesting.

The novel’s greatest drawback, to this reviewer’s mind, is the choice of Rajakumari as raconteur. Nambisan’s whore with a tart voice is not entirely convincing. She knows too much, thinks too well, articulates too intelligently on matters well beyond her ken. Even this might have been acceptable, except that she does all of this in a language that would belong rather more typically to a scientifically trained mind. A whore who cites findings in The International Journal of Trichology (vol XXI, no. 7, pp 26-48) at one place and rues her learning difficulties at another is simply not consistent. That Rajakumari is conscious of this flaw and is constantly explaining her views as based on information she obtained from a doctor, teacher or military client doesn’t help (“His wide fingers and strong wrists align delinquent fragments of bone; his fleshy palms slap on pure original paste laced with a mere 20 per cent diclofenac sodium and 10 per cent dexamethasone—my doctor again.”) Perhaps, Pingakshi the red-eyed goddess herself would have served better as the all-knowing, all-seeing, oracular voice of “the village turned half-town”.

All in all, not an easy read, but definitely a rewarding one for the reader who wishes to pause and ruminate a bit about the contrary nature of a beast called growth and its impact on ordinary, everyday lives.