Ranji, His Love, Life And Letters

India's greatest cricketing legend was also an incurable romantic, as revealed by a recent discovery of his love letters to the Holmes sisters, Mary and Minni 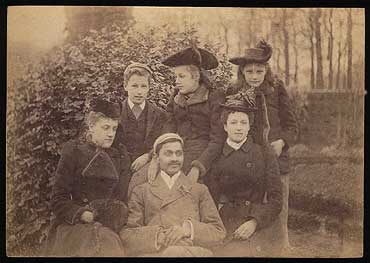 outlookindia.com
-0001-11-30T00:00:00+0553
Cricket is a game of glorious uncertainties,' runs the old maxim. But sometimes the lives of cricketers can turn out to be more gloriously uncertain than an exciting game of cricket. How else can you explain the fact that Ranji, arguably India's greatest cricketer ever, rented a whole train to take his love, Mary Holmes (also called Madge and Poly), to London for a holiday in the 1890s even as he was deeply in debt, owing money to his tailor, bartender, grocer, newsagent and restaurateur in Cambridge? How can you explain that he was showering Mary with costly gifts—a diamond bracelet, an ivory necklace, a model of the Taj Mahal, a brooch—even as he was planning to live on friends, eating in their homes after inviting himself forcibly, to avoid destitution?

What we all know is that Ranjitsinjhi played for Cambridge University and decided to make his cricketing career in England rather than in India, for Sussex and England. He played 15 Tests between 1896 and 1902 (in a period well before India had achieved Test status), all his matches being against Australia. Ranji had a first-class average of 56.37 and a Test average of 44.95, which is outstanding for the period. What is not, however, known is Ranji's colourful love life. This is evident from 37 letters he wrote to Mary, rescued from oblivion in March 2002, 112 years after they were written. The letters are now housed safely in the Wren Library, Trinity College, Cambridge. There are more than half-a-dozen published treatises on Ranji. (Cross Standing, 1903; Kincaid, 1931; Roland Wild, 1934; Ross, 1983; Raiji,1987; Simon Wilde, 1991.) Yet, there is no mention of Mary Holmes, also referred to as Madge or Poly by Ranji, in these books. The recent discovery of these letters is a prize, one that opens up interesting aspects of Ranji's life and character.

They came by me very strangely. I was to present a seminar at the South Asia Seminar Series at Oxford last month. When the pamphlet announcing the series of seminars to be presented this term was circulated, I got an e-mail. It was from Miss Mariecke Clarke, grand-daughter of Mary Holmes. She wrote: "I have noted that you are giving a seminar on cricket in colonial India this term. I am not a student of cricket, but you may like to know that I have just donated a substantial number of letters written by Prince Ranjitsinhji to my grandmother to his old College, Trinity, Cambridge." Interviewing Mariecke, I was told that Ranji had been close to the Holmes family since 1890.

It all started when Ranji was cycling past Bond and Holmes (established 1874), their huge grocery store on Cambridge's 57 Sidney Street, when the two sisters, Mary and Minnie, saw the Indian prince for the first time. Finding him extremely attractive, they dropped their handkerchief for Ranji to pick up. Once he picked it up, the journey had begun. The next stop was the Holmes house, above their store. The 18-year-old Ranji soon became a regular. Only after a few months he started calling Mr and Mrs Holmes mother and father. With Ranji living on 22, Sidney Street, it wasn't difficult for him to visit the Holmes house regularly, more so with indulgence from both the sisters.

Ranji's first letter to Mary, written in 1891 as a 19-year-old, was formal. However, it was reflective of his growing attachment to the Holmes family. "My dear M.H., I was delighted to have your sweet note. I am sorry I was the unfortunate means of a quarrel between your darling self and your beautiful sister. The opera glasses, I hope, you will accept as a present from me to you. But if your sister is desirous of having a pair, I shall be most willing to provide her with a pair. I wish I could have your charming company sometimes here at teatime. I shall be delighted to be of any service to you if you want anything." At the end of the letter, he expressed keenness to know her full name.

By the course of the third letter, the tenor of the writing had changed. "Dear Madge, I am glad to say that I am not going away during the vac but am allowed to stay here. So I hope I shall have your company till the next term without a break. If you let me know when you can come today I will manage (ensure) so that no one can come and see me. I hope your mother will let you and Minnie come." In the next letter, Ranji was profusely apologetic for not being home when the two sisters had come. He also insisted he liked them more than he liked any other girl. "Please do not think I like all girls because I seem to give them presents. I like you and Minnie best. I can do anything I can to please you and Minnie."

Within six months, their affair had grown stronger, if the tone of Ranji's letters is anything to go by. "I think of going to London from Friday to Monday. I shall miss you immensely but shall rejoice doubly to see you back again." It's from this time that we know of another Ranji, the poet. In many of his letters, he wrote verses for Madge, urging her to write some for him. He claimed that all of them were either original, composed by him, or translated from the vernacular. He had copied Shelley's Lines to an Indian Air, claiming it had been written by an Indian poet and translated by him! On April 1, 1891, he wrote to her, saying, "In the last verse I have asked you to guess (who I am referring to). I think these are better than the last ones as they are made after thinking a lot and the rhythm is all right."

Dearest Madge,
Would my Poly know if I love let her take
My last thought at night and the first when I awake?
Let her think what odd whimsies I have in my brain
When I read one page over and over again
And discover at last that I read them in vain.
And lastly when summoned to drink to my flame
Let her guess why I never mention her name
Though herself and the lassie I love are the same.

In the next verse he did not leave anything to guesswork:

I loved thee once, I love thee still
And fell this world asunder
My loves eternal flame would rise
Midst chaos crash and thunder.
Two rubies on those lips of thine
Unrivalled in fresh glory
Happy is the man to whom
They whisper their love story.

A few days later, he wrote:

Good night my love! The night is ill
Which shows those we should unite
Let us remain together still
Then it will be good night.

On one occasion, Ranji had tried to ignite Mary's passions by telling her how intimate he had become with a London girl. This was part of a plan his friends had made to tease her. Upon seeing the plan fail, and finding her determined not to speak to him any more, he wrote: "I am so sorry to have offended you by letting you (know) about the beastly London girl. It was Hussain's (a friend who visited Ranji often) suggestion, when I told him that you had asked me whether I like any girl beside you and Minnie, to say what I did. I shall never forgive him for the trick. I am so awfully ashamed of acting accordingly but you must forgive me for doing so unless you wish to make me unhappy and sad. I love you only and I did not think I could be fond of anyone as I am of you and of Minnie. I hope you will forgive me."

It's evident from the account of Christopher Neve, grandnephew of Mary Holmes, that Ranji often gave the girls extravagant gifts, bicycles and jewellery. He used to take them on picnics and expeditions. Once he had taken them to visit Wimpole Hall, where the Holmes had their farm, to see their grandfather William Clarke, referred to as W.C. in the letters. The most interesting thing about this expedition was that they used a dogcart as transport.

In the letters, there is little mention of cricket, except to say, "I am tired this evening. I have been playing cricket." However, in the last surviving letter from him to Madge, dated October 24, 1905, Ranji briefly mentions his financial crisis and his plans of writing a cricket book, which he intended to sell as a last resort to alleviate his problems. He mentions that he had already secured 3,000 orders for 'Cricket Guide and How to Play Cricket' and he planned to sell 5,000 copies in all. Clearly, Ranji, living like a prince, continued to live beyond his means on an annual allowance of Rs 5,714 and was perpetually in debt. He gave away expensive gifts to the Holmes sisters on credit. His financial problems were only partly taken care of in 1898 when his friend, Pratapsinhji of Jodhpur, gave him Rs 30,000.

What was most interesting, as suggested by Neve, was that while Mary had married in 1898 seeing that her affair with Ranji was going nowhere because of their colour difference, Minnie was deeply attached to him and preferred to stay unmarried all her life. This seems possible, for Ranji was in constant touch with Minnie even when he had not written to Madge from India. However, Mary had never forgotten her first love and had a large photo portrait of Ranji with his bat with her in her old age.

What we don't know is whether Mary, whose husband had abandoned her and six surviving children, and who was on the verge of destitution, received any support from Ranji after he became the Jam Sahib of Nawanagar in 1907. We will also not know whether Ranji would have preferred to stay unmarried to honour his relationships with Mary or Minnie Holmes. This suspicion is strengthened when we hear about the statue of a British woman Ranji had erected in his native state in the 1920s. His biographers have wondered whether it was of Edith Borissow, daughter of the Chaplain of Trinity, the Rev Louis Borissow, who had looked after Ranji when he arrived in Cambridge. The discovery of his letters to Mary suggests otherwise. In which case, Ranji, Wisden Cricketer of the Year for 1897, never forgot the love(s) of his life.