Forget the surveys, anti-incumbency and rebels may still knock BJP off Raipur perch 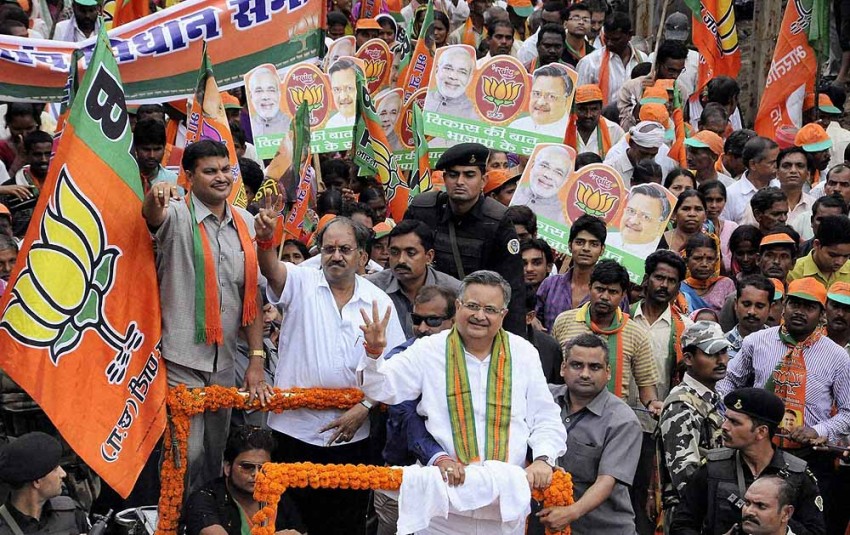 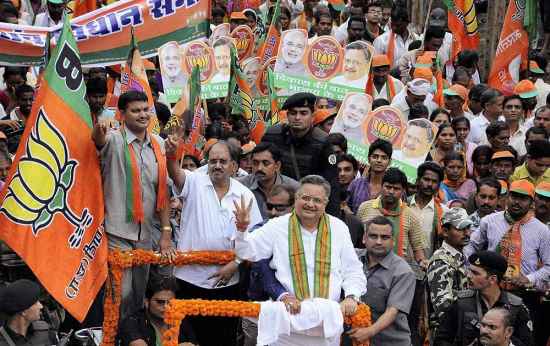 The CNN-IBN-CSDS survey this week projected the BJP bagging 61-71 seats in the 90-member assembly in the election to be held later this month (November 11 and 19). It pinned the Congress tally to between 16-24 seats. Curiously, the survey did not seem to please BJP functionaries in the state. A glum Nar­esh Gupta, who heads the BJP’s legal cell (elections), asserted that such surveys with over-the-top projections act­ually only tend to damage the party’s pro­­spects. “While party workers are left euphoric and engage in premature celebrations, Congress workers will work harder,”  he explained. Retired bur­­eau­crat and astute state observer Dr Sushil Kumar Trivedi, asked for his rea­ction, wryly says, “Achchi kahaani hai.”

A mere 2% votes separated the BJP and Congress in ’08. And nothing since warrants a swing in the former’s favour.

BJP functionaries are wary because pre-poll surveys aired by the same cha­­nnel  before elections in Uttarakh­and and Himachal Pradesh had indica­ted a clear win for the party there too. “But we lost both the states,” recalls Gupta, explaining why the new fin­d­ings are being taken with a pinch of salt. A mere two per cent of the votes separated the BJP from the Congress in 2008. Nothing since then has happened to warrant a wild swing in their favour, admit party leaders in the state. True, the party is banking on the track record of chief minister Raman Singh and a possible ‘wave’ to be generated by the party’s prime ministerial candidate Narendra Modi. But in many ways, the pre-election scene this year is substantially different from last time. And within the state, all bets are off.

For the elections have been queered somewhat by the emergence of the Chhattisgarh Swabhiman Manch, a reg­ional outfit floated four years ago by the late Tarachand Sahu, a BJP rebel. The manch has forged an alliance with parties like the CPI, JD(U) and others. The outfit banks on the emotive appeal of rallying the original inhabitants of the state against the “outsiders” who, says manch leader and Tarachand’s son Deepak Sahu, have benefited the most from BJP rule in the state. Its one-point agenda is to oust the BJP from power and it draws strength from the fact that the Sahus (oil traders) and Kurmis (an OBC farming community) constitute over half the population of the state.

It was Tarachand Sahu, the first president of the BJP’s state unit after Chhattisgarh was formed in 2000, who first raised the ‘locals vs outsiders’ question. In the ’08 assembly polls, he actively campaigned against the then speaker of the assembly, Premprakash Pandey, and ensured his defeat. Sahu Sr was then expelled from the BJP which was when he floated the CSM. But he lost his Lok Sabha seat in the 2009 general elections, even after polling 2,75,000 votes under the CSM banner.

Nobody in the state believes the CSM has the organisational muscle to win many seats. But many do remember what the then Congress rebel Vidyach­aran Shukla did in 2003. Shukla, killed in a Maoist attack that wiped out most of the state Congress leadership in May this year, had then joined hands with the NCP and contested all 90 seats. He managed to win only one seat but engineered the defeat of the Congress in several. The party never recovered from that blow.

This time the CSM and the number of BJP rebels in the fray could well do someth­ing similar to the saffron party. Even 6-7 seats bagged by parties like the CSM, BSP, CPI and independents may lead to a hung house, making projections haz­ar­d­ous. At least two rebel BJP cand­ida­tes in the fray are said to be in a win­nable position. The BSP, which cor­nered seats in the last three electi­ons, is expected to repeat the perform­ance while even the CPI app­ears to be in with a chance to bag 1-2 seats in Bastar. 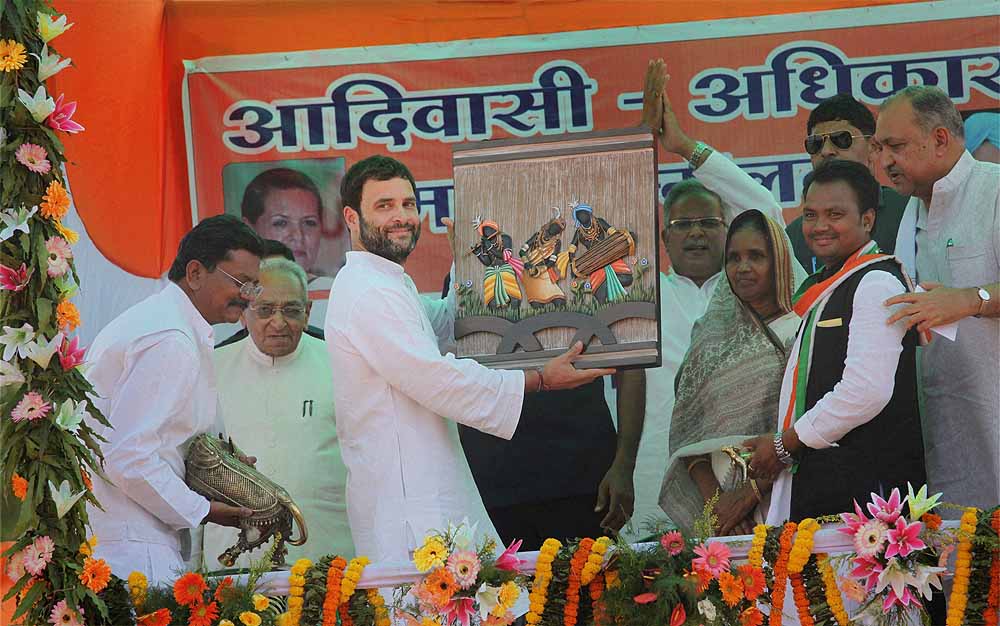 “Chhattisgarh has had no tribal as CM even though 32% of the state population is tribal. I do not consider Ajit Jogi to be a tribal.”
Nandkumar Sai, Tribal leader

Ironically, in Chhattisgarh it is the Congress which is spearheading the campaign against corruption. Property details declared by the BJP ministers, all 12 of whom are contesting the elections, shows a manifold increase in their wealth since ’08. And while ex-BBC journalist and activist Shubhr­an­­gshu Chaudhury feels corruption in the state is a non-issue, some erosion of support for the BJP can scarcely be ruled out.

What does tilt the scale in favour of the BJP, though, is the strong presence of RSS affiliates in the state. Normally, with tribals constituting over 30 per cent of the state’s population, and Dal­its around 12 per cent, the Congress would have been said to be in with a chance. But over one hundred Vanvasi Kalyan Ashrams, 282 Saraswati Shishu Mandirs in the urban areas and over a thousand of them in the rural areas, not to mention the 500 single-teacher schools styled as Ekal vidyalayas, have contributed much towards indoctrination of this section of the population. And the BJP has been reaping the harvest. The state chief of the Sara­swati Shishu Sangathan, Gauri­shankar Katakwar, however denies any help or grants from the state government.

This should, to some extent, explain why the BJP won 11 of the 12 seats in Bastar in 2008. The result was similar in Surguja as well. Since then, however, the Congress has put its act together. Rahul Gandhi has toured Bastar more than once,  even reaching the interiors following the Maoist massacre earlier this year, late at night, disregarding security concerns. One of the tribal youth he chatted up in 2008, Samu Kashyap, has now even been fielded from a general seat, Jagdalpur, by the Congress, indicating the party’s growing confidence in the area. 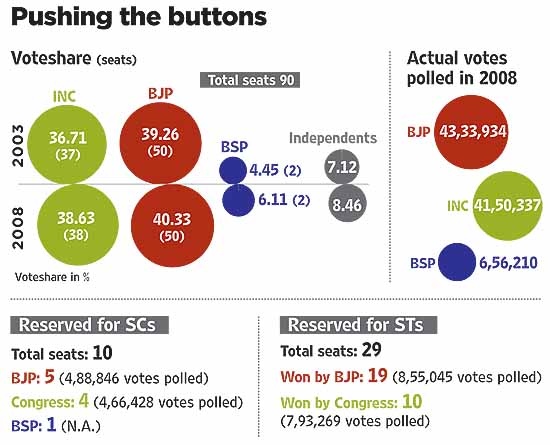 “It’s going to be a close contest. I feel the CSM will cut into BJP’s voteshare. Both Congress and BJP face infighting in the ranks.”
Himangshu Dwivedi, Editor, Hari Bhoomi

Above all, the Congress appears to have succeeded in appeasing its former CM Ajit Jogi, by offering party tickets to his wife and son. Jogi apparently exp­ects to contest the next general election for the Lok Sabha, especially if the party does well in the state. After the Maoist attack, Jogi is now the strongest surviving Congress leader. While the party had paid a price for infighting and Jogi’s rivalry with others in ’08, this time it appears better placed.

The BJP’s claims of good governance, says Shubhrangshu, is limited to the “roadside villages and areas from where journalists can return from a day trip”. An alarmingly high number of villages in the state, according to the National Sample Survey, are still without water, electricity and toilets. And while the CM takes credit for setting up a new capital and a cricket stadium, his government is blamed for giving away land, mines and water to industrialists at throwaway prices. In this fluid situation, only the bravest would venture to predict the outcome of what promises to be a close contest, notwithstanding pre-poll surveys indicating otherwise.

Alex At The Ganga