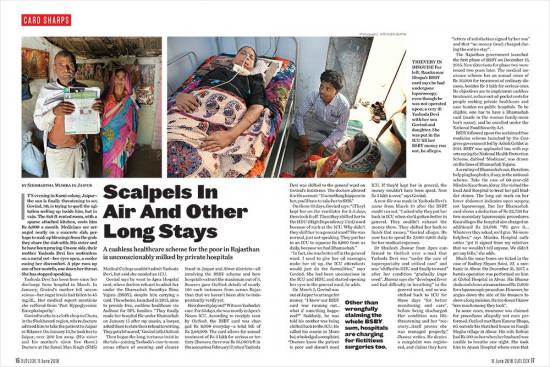 The BJP government in Rajasthan is scrambling to salvage its flagship medical insurance sch­eme, the Bhamashah Swas­thya Bima Yojana, after the lone company involved in the project threatened to pull out citing non-payment of a part of the premium by the health department. Official documents assessed by Outlook show the fractious relationship between the New India Assurance Company (NIAC) and the government over the scheme­—launched in 2015 to provide cashless medical insurance cover to  families living below the poverty line.

Rajasthan chief minister Vasundha­ra Raje’s project is believed to have provided the framework for Prime Minster Naren­dra Modi’s national health protection scheme, Ayushman Bharat. Rajas­than goes to the polls on December 7 and the opposition Congress has red-flagged the state scheme to pin down Raje, already facing massive anti-incumbency and all­egations of running an auto­cratic government.