Columnist Rahul Singh, author of Khushwant Singh...In the Name of the Father—to be launched on July 20 by Amitabh Bachchan—on what it means to be Khushwant’s son: 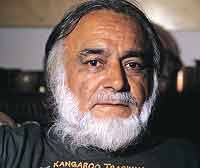 What do you like the most about him?
His outrageousness and his honesty.

And what do you hate most about him?
His political naivety.

He followed in your footsteps, into journalism, and rose instantly to fame....
He came in when the media wanted the kind of personalised journalism that he perfected.

Were you surprised at his shocked reaction when you cut off your long hair?
No, not really—he is a liberal but on certain matters he is pretty conservative.

Do you regret what you did?
Yes, I do. I think he has a point about identity.

What was your most embarrassing moment as his son?
At a party in Washington during the Emergency, when someone said: "Why doesn't someone shoot that bastard Khushwant Singh."

And your proudest moment as a son?
In Pakistan recently, when my taxi-driver turned out to be his admirer, and refused to take money from me.

Is it because of his troubled marriage that you never married?
No. I think in the beginning my father probably expected too much from my mother but later grew very dependent on her.

How hard is it to write about a father who has already said all that's to be said?
Very difficult, it took me two years.