The Gandhi scion's first serious foray into UP is a winner. But is it now too late to resurrect a beleaguered Congress? 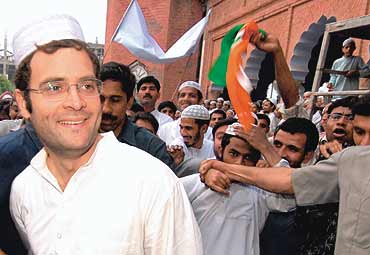 outlookindia.com
-0001-11-30T00:00:00+0553
Seen from above, it was difficult to tell which head in that sea of white caps belonged to Rahul Gandhi. For, seconds after the Congress's crown prince alighted from his SUV—the only vehicle permitted inside the historic red-brick Dar-ul Uloom campus at Deoband, the largest and, perhaps, the most influential centre of Islamic learning in Asia—someone thrust a cap on his head. And Rahul vanished into the surging mass of students, all eager to touch him, talk to him.

And this was the story all through his whistle-stop tour of western Uttar Pradesh, barring the first meeting at Muradnagar. Women, youth and Muslims in particular thronged near him, filled balconies and terraces lining the route—some close enough clicked him on their mobile phone cameras. Rahul had clearly connected with his target constituency, leading his minders to rue the fact that they had not put him on the campaign trail earlier.

At Deoband, Rahul's virtually security-free mingling with the students sent out an unambiguous message: one of easy trust. And at the rally at the end of his three-hour-long halt in Deoband, he carried the message forward, "I am blind, blind to caste and religion," he said, pausing, "I only see Hindustanis." The audience broke into cheers. "All Hindustanis are one, and if I see one Hindustani strike another, I will stand with the one who has been struck."

Rahul's speeches may be short on flamboyance, but they are direct: "UP has fallen behind in the race for development. Only youth power will change it—and I see that youth power standing in front of me," he said to cries of "Rahul Gandhi zindabad". Though youth power was a running refrain in every speech he made, it had a special resonance in Deoband—it spoke not just of trust, but of inclusiveness. Visiting the 141-year-old Dar-ul Uloom at Deoband also had a political subtext. For it was Deoband's conservative clerics—rather than Aligarh Muslim University's "progressive, westernised" scholars—who participated in the nationalist movement, and opposed Partition.

It was also brave: in current folklore, the Deoband school is seen as being the inspiration for the Taliban and Islamic terrorism; add to it the Sangh parivar's claim that it is the breeding ground for the Students Islamic Movement of India (SIMI). Little wonder then that no Congress leader has visited the seminary after Mahatma Gandhi, Maulana Abul Kalam Azad and Indira Gandhi, the last in 1980. A fact Rahul pointed to: "Don't forget, I am Indira Gandhi's grandson."

Even though Rahul was on a major confidence-building mission with the Muslims, he did not repeat at the public rally what he said informally to journalists: that his father, Rajiv Gandhi, had told his mother that the Babri Masjid would only be destroyed over his dead body. Evidently, Rahul did not wish to labour the point from a public platform, since it involved former Congress PM P.V. Narasimha Rao. But neither did he withdraw the remark when quizzed on it by journalists a day later—after rivals said it smacked of arrogance and feudalism.

The BJP and SP castigated Rahul for not knowing his history, reminding him that the Congress under Rajiv had opened the locks of the mosque in 1986 and permitted the shilanyas in 1989. But, Rahul does know his politics: for Rao, fairly or unfairly, has long been a hate figure among UP's Muslims, who have been waiting to hear some criticism—even if veiled—from a Congress leader. A Deoband scholar, Gufran Anjum, said, "For us, the Babri issue is over. Rahul's entry heralds a new chapter—we believe he can recreate the India of Gandhi, Nehru, and Indira and restore the Congress which stood by the Muslims at its most difficult moments."

Does this mean that the Muslims—who lined the roads not just in Deoband, but in Muzaffarnagar, Moradabad and Bareilly—are going to rush back to the Congress? No. But the ice has been broken. A student in Deoband said, "The SP is still our first choice, but with Rahul's visit, the atmosphere may change." It has long been clear that for a breakthrough in UP's caste-driven politics, the Congress must first attract some non-Yadav OBC communities—and then its natural constituency of Muslims and Brahmins will trickle back. On this trip, though Rahul used caste-neutral language, he made a pointed strike in Jatland, announcing an electoral tie-up with Mahendra Singh's Tikait's Bharatiya Kisan Union. 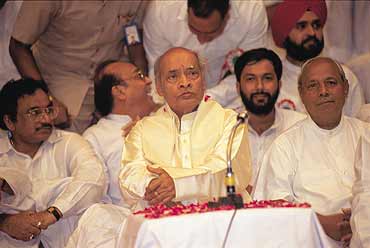 Unfortunately, Rahul's first serious foray into UP—his earlier trips were confined to the Amethi-Rae Bareli belt—has come too late to make too much of a difference. A local intelligence official in Bareilly said, "Rahul should have started this many months back, and allowed for time to galvanise the party machinery. People were giving the Congress about 22 seats; today I can say it will be up to at least 35."

Rahul, too, does not have very high expectations for the Congress in this election. "The Congress has not fought a serious election in UP since 1991. And in the 1996 elections (when the Congress gave 300-odd seats to the BSP in alliance) there was a total sell-out; it destroyed the organisation. We lost the ability to create leaders at the ground level. That will change now. You will see a difference in these elections, and a much bigger difference in 2009," he said.

Perhaps the most significant point that Rahul made was that he was in for the long haul. In every speech he said, "I plan to have a long-term relationship with UP; to fight shoulder to shoulder with you. I'll keep coming back, even after this election." Clearly, UP will be his "karmabhoomi", the launching pad for a national revival. Rahul may have been "launched" several times before—at the Hyderabad plenary in January 2006, for instance—but this looked like the "hard launch".

The launch was delayed largely because of security considerations: for, when Rahul travels in the countryside, all security barriers break down. For instance, at every stop in this trip, he got down to shake hands with people, as he did with passengers sitting in a stationary bus, sitting on top of a tractor or standing behind barricades. And he accepted whatever he was given to eat—such as a chuski (those lethal coloured ice lollies) or sugarcane. Politically, it goes down a treat: As a man at Khatauli said, "Dekha kitna tasalli se haath milaya." (How openly he shook hands). Or as our driver—a Yadav from Safai, Mulayam Singh Yadav's village, put it, "Itne bade ghar ka ladka hain magar sab ko milta hain, bus pe log ho ya gaon ke garib." (He is from such a reputed family, and yet meets everyone, people in buses, the rural poor). Feudal perhaps, and distasteful to the educated middle class, but clearly not to rural India. But, for the attending SPG, these trips are a nightmare.

In this assembly election, the best Rahul can do is to "shake up" the vote and add enough to make a BSP-Congress government possible. But the question is: will the Gandhi-Nehru charisma turn the Congress fortunes and help the party achieve its desire of seeing Rahul as prime minister in 2009, when he turns 39? After all, father Rajiv was PM at 40. But to make that a possibility, Rahul has to be visible—and sustain the momentum begun in western UP.