Bad music, corny lines and some unintentionally funny moments come together rather well. It is unrelentingly creepy. 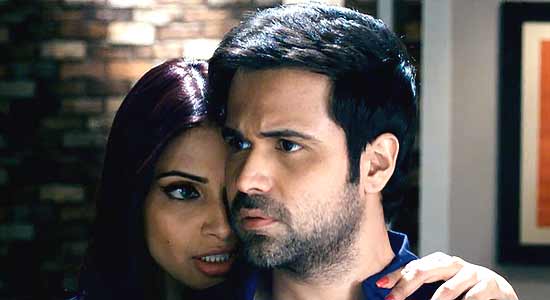 Bad music, corny lines and some unintentionally funny moments (for example, Emraan’s kiss calming down a hyper Esha) come together rather well in Raaz 3. But it still manages to scare with the hodge podge of the sinister—black magic, kali vidya et al. Despite being set in the glam of Bollywood, the movie looks more rough than slick. The 3D effects don’t grab or add to the fear factor. And the story has to do with an innocent soul becoming the battleground for good and evil, God and the Devil. Traditionally, our horror films have offered comic relief between the chills and thrills. Raaz 3 is unrelentingly creepy—broken by some leg show, cleavage and some sex ’n kisses. For all their proclaimed worldly progressiveness, the Bhatts stick to their regressive streak, even in the spirit world. The ambitious girl has to be the Devil and Lord Ganesh can deliver anyone from anything. Bipasha continues to deliver dialogues in hushed whispers, Esha is her usual colourless self and Emraan looks suitably helpless caught between the two. A poster of Hitchcock’s Birds appears early to tell us where the much-hyped cockroach scene comes from. But the roaches looked more like butterflies to me!