The RSS too is focusing on development—taking over NGOs 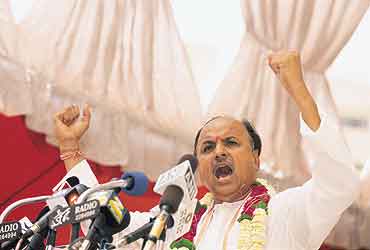 outlookindia.com
-0001-11-30T00:00:00+0553
Praveen Togadia and Ashok Singhal will be disappointed at the way this election is turning out. There is no opportunity for them to exercise their lungs and scream about mandir, Muslims and pseudo-secularists. They have been told to lie low and behave like good boys till the elections are over.

The RSS, which really calls the shots, appears determined to lend a helping hand to Vajpayee and the BJP. The VHP, sore that the NDA government has not been able to deliver a Ram temple even after five years in power, could have been an embarrassment. But the Sangh appears to have been successful in reining in the enfants terribles of the parivar. Sources say that between now and polling day, the VHP can be expected to make a few noises in Uttar Pradesh about the unfinished temple agenda. They will also engage themselves with village-level mobilisation. But nothing high-profile or dramatic.

The RSS too appears to be focusing on the new BJP mantra—development. It has gradually begun spreading its tentacles to take over existing NGOs. Take the example of the nodal agency CAPART (Council for People's Action and Rural Technology). Gradually, it has been packed with people with RSS leanings. Influence in this body is crucial as CAPART controls the funding to other NGOs.

Meanwhile, the Gram Bharti, an RSS organisation that had been in cold storage for two decades, has suddenly sprung to life. Its main purpose is to take up development projects in rural India. RSS spokesman Ram Madhav admits that the presence of several BJP state governments has facilitated the funding to RSS outfits or RSS-backed NGOs.

There is nothing dramatic or new about the RSS entering the development sector. It runs several NGOs in the Hindi belt while its cadres act as volunteers at other "independent" NGOs. The motivation is not different from what drives Christian missionaries—spread the good word through good work. That there is a particular design to this "good work" becomes clear with a scrutiny of the syllabus at RSS schools. Their version of history remains controversial to say the least while there are subjects like character-building and moral science.

Yet the RSS-controlled NGOs cannot be ignored. In states with a BJP government, traditional NGOs now claim to be getting pushed out by Sangh outfits.

State patronage remains vital to the growth of the Sangh. That is why it is doing everything possible to lend the BJP a helping hand. Even if it involves curtailing the activities of the VHP.