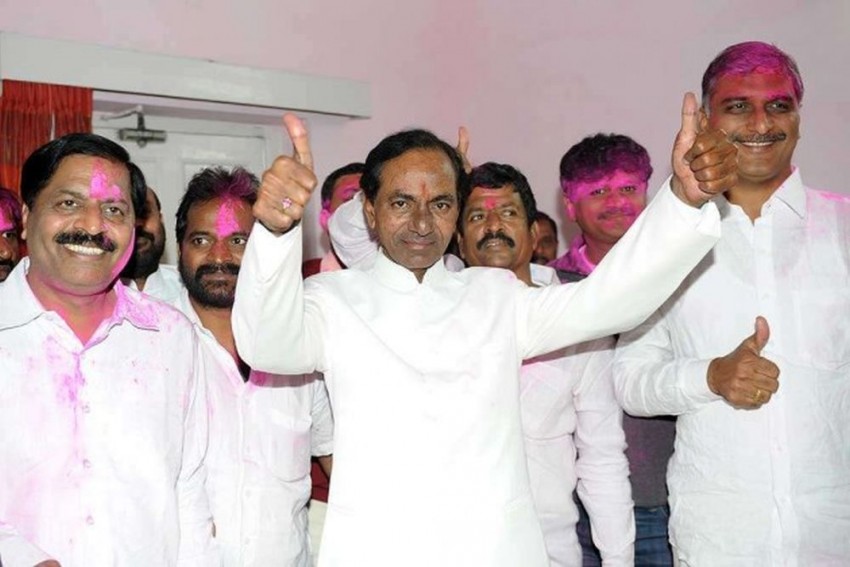 The Telangana assembly stands dissolved and the country’s newest state is heading for snap polls—November in all likelihood, at least six months before time. That’s chief minister K. Chandrasekhar Rao’s latest move to catch the Opposition off-guard, on the back of surveys that apparently give him the edge to retain power for a second term. The move also provides an overview for understanding the paradoxical relationship between politics and mathematics—two asynchronous disciplines that a shrewd politician can combine to find practical strategies to reach modern democracy’s primary goal, winning elections.

First the simple arithmetic: KCR is set to address 1,000 meetings in about roughly three months before the polls, averaging 11 a day. He is 64. Can he pull off such an energy-sapping assignment? Perhaps, yes. Confidence is a fierce driving force when paired with years of hardnosed political intuition and experience, and topped with a kind of smugness and hunger that trails power.

KCR is confident of winning 100-plus seats in the 119-member assembly. His conviction comes from what he and his party, the Telangana Rashtra Samithi (TRS), assert is good governance and their success in fulfilling the promises made in the 2014 election manifesto as well as accomplishing many more initiatives such as incentives for poor brides and grooms. “I have given my people more than 70 welfare schemes without them asking for these,” the chief minister said at his first election rally in Husnabad.

The development narrative rings a bell. The BJP has been harping that. Almost on cue after KCR met Prime Minister Narendra Modi and senior BJP leaders, he too is singing the same tune. What does it imply? The question is will KCR and the TRS go back on its secular image and toe the BJP line? Apparently, the BJP and TRS have a quid pro quo arrangement: the BJP helps KCR in the assembly polls and the TRS reciprocates during the Lok Sabha elections in April-May 2019.

The reciprocal arrangement can be called a calculative move if the 2014 poll statistics are plotted on the blackboard. The TRS, All India Majlis-e-Ittehad-ul Muslimeen (AIMIM) and the BJP had a vote share of 34.7 per cent, 2.3 and 10.5—which works out to 47.5 per cent. From this calculation, KCR returns to power with a thumping majority. Besides, the party’s internal surveys show the TRS has about 80 per cent support in as many as 60 constituencies, and around 60 per cent in 40. But will the AIMIM, which KCR calls a “friendly party”, dine with the TRS when the third partner is the BJP? Difficult to tell as politics makes strange bedfellows.

KCR speaks in a measured tone punctuating each word with mini-pauses, but his remarks are sharp and incisive. The trait becomes all the more apparent when he asks people to “give a befitting reply” to the “canard-mongering” Opposition, especially the Congress.

The TDP tied up with the Congress in Telangana, its rival in Andhra. Is KCR going with the BJP, throwing away his party’s secular line?

But the Congress is not hand-wringing about the TRS offensive. Instead, the party has established “war rooms” to spearhead its campaign, especially through social media, to debunk KCR’s so-called achievements. In a widely circulated video, Congress member Revanth Reddy is seen caning a KCR lookalike for lying and letting down the people. The Congress has forged a tripartite alliance with Andhra Pradesh chief minister N. Chandrababu Naidu’s Telugu Desam Party (TDP) and the Communist Party of India. “Our alliance will put an end to the arrogance raj of the TRS. The battle is between KCR’s corrupt family rule versus the people of Telangana,” says state unit Congress chief Uttam Kumar Reddy.

It’s a rare risk  TDP’s Naidu has taken by aligning with the Congress in Telangana when the two parties are rivals in Andhra Pradesh. The decision is a first for the TDP in 35 years, taken apparently “in the interest of Telangana”. What next? What will be the seat-sharing formula? Reports suggest the Congress has offered 15 constituencies to the TDP, but it wants 20 to 25. More questions abound. Will tickets be allotted on the basis of vote-shares in the previous polls? Or, will a candidate’s chances of victory be the main criterion? What if rejected aspirants cross over to the rival group? Political equations aren’t as straightforward as 1+1=2. Sometimes the result can be an odd number.