Pushed Over The Edge?

Suicide or murder? Something doesn't quite add up in the latest celebrity death to rock the capital. 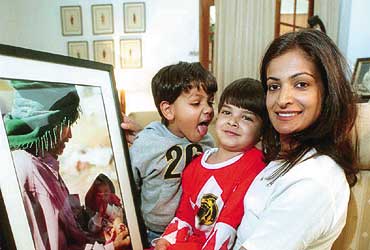 outlookindia.com
-0001-11-30T00:00:00+0553
If suicide was what was on her mind when Natasha Singh was last seen by friends and acquaintances in Delhi on the evening of March 16, she did a very good job of hiding it. The only glitch was that the 31-year-old model-turned-housewife-turned-photographer and estranged wife of the son of senior Congress leader K. Natwar Singh was not known to be particularly good at hiding her feelings. Friends remember her as strong-willed, independent, meticulous and gregarious, someone "very vocal about her feelings". "She was not a floozie," says model-columnist and childhood friend Shefali Talwar.

Besides, life for the budding photographer had recently begun to look up. She was working on a photo exhibition on the women inmates of Tihar Jail for which she had been working with Kiran Bedi, former inspector-general of prisons. There was a court hearing to look forward to on April 5 in which the custody of her sons Hanut, 7, and Himmat, 5, was to be decided. A possible relocation to New York for a course in photography was also on the cards.

But keeping up appearances may have come easily to the half-Jordanian—by some accounts also "half Muslim-half Christian"—Natasha, after a nine-year marriage to All India Youth Congress general-secretary Jagat Singh. She was in a way the perfect anathema to the royally-inclined and conservative Singh parivar. The two had eloped and got married in 1993 against the wishes of Jagat's family, especially his Patiala royal family-born mother. She had wanted a blue-blooded bride for her only son. The privileges of the family, however, were grudgingly extended to Natasha after the birth of her son. But it was also an acceptance that was to cause her much emotional consternation, alleged physical abuse and which in a way led to her death by a fall from the highest point of the seven-storeyed Hyatt Regency hotel in the capital.

Her death has all the ingredients of a tabloid potboiler: an attractive mixed-parentage model from a broken home, married into and estranged from a Delhi power family, a love affair possibly gone sour and a grisly death in a haze of alcohol and sleeping pills. The police lost no time in providing fodder for Delhi's swish set gossip mill: hours after her death, they said Natasha had died of gunshot wounds, and indicated murder. A day later, they flipped, saying it was a suicide. So did Natasha kill herself, or did somebody push her over the edge?

The police now are sticking by the suicide theory. But friends are divided over the nature of her death, considering that Natasha had been on an upswing especially after an ill-fated relationship with Vinay Kapoor, Coca-Cola's former northern region commercial director and man-about-town. Their break-up was provoked by a life-threatening attack in December last year on Kapoor, allegedly in a bid to get him out of Natasha's life. It did. Kapoor shifted to London, on a transfer from Coca-Cola India.

"The worst was over for her which is why the suicide theory doesn't make sense," says Malvika Rajkotia, Natasha's lawyer in the divorce case. Photographer Prabuddha Dasgupta, who was helping her come into her own as a lenswoman, also finds the timing "extremely strange". "I'd need more than a post-mortem report to believe it was a suicide, especially considering the kind of adversity she was up against. She was definitely living under threat," he says. Early this year, Natasha said she was attacked by a woman claiming to be her former maid. The heavy-set attacker had apparently berated her for having too much masti (fun).

NATasha had filed for divorce in August 2000 on grounds of cruelty, instances of which included being allegedly beaten up so badly on one occasion that she passed out and had to be hospitalised for a week.Jagat—whom she described in a written complaint dated January 22 this year as a violent man, "hell-bent on destroying my life and reputation"—was also reportedly not averse to calling her names in front of their children. Natasha also accused Jagat of infidelity, involving a Delhi Page 3 party circle regular. Jagat, on his part, had alleged that the reason his wife had wanted out of their otherwise "normal" marriage was her wilful and adulterous liaison with Kapoor.

However, the murky divorce took a tragic turn when Natasha's body was spotted by a Dutch national, who checked into room 105 of Hyatt Regency, early morning on March 17. After the guest called the hotel's front desk, an AC mechanic was sent to the first floor terrace garden to find the blood-soaked body of a woman, lying face down and dressed casually in blue jeans, a purple embroidered top and sneakers. She also had with her a red handbag which contained a cellphone that—police investigations strongly suggest—is set to change forensic history. Because not only did the unusually sturdy set survive the fall, it was also used to convey uncharacteristically melancholic SMS suicide notes to friends, most of whom were common to both Jagat and Natasha.

The autopsy report noted multiple fractures on Natasha's body, splintered ribs, two of which had pierced her back and T-shirt making bullet-like holes that led to the initial confusion over whether she had been shot. The face was unrecognisable (Jagat identified the body by a scar on the index finger) and internal organs had become "pulpy" due to the "momentum" of the fall. The phone surprisingly stayed intact.

Other indicators however suggest that Natasha had suddenly turned suicidal after reaching the hotel, and consumed a cocktail of alcohol and drugs. Alexander Khakha, head of forensic medicine at Safdarjung Hospital where the two autopsies on Natasha's body were conducted, says the clues strongly indicate a non-homicidal death. According to him, there was a very strong smell of alcohol when he opened her stomach. A near-empty hexagonal bottle of whisky was also found on the hotel terrace. (Friends maintain Natasha was more of a "wine person".) So why was the wine-drinking Natasha drinking whisky, that too neat, perched on the hotel rooftop? Two emptied and one half-used strips of Alprax—a non-soporific anti-anxiety drug—were also found in the bag. But whether she actually took the 25 pills together will only be known once the viscera report is out.

Fashion designer Aparna Chandra, whose new collection Natasha had come to see Saturday evening a few hours before her death, too finds the suicide theory difficult to digest. "She seemed very upbeat. She was wearing a blue spaghetti top that I had gifted her. Like always she talked about her sons... they were her life. But what's most surprising is that she mentioned very clearly that she was going to be home on Saturday night," says Chandra. Weekends could have been a lonely time for Natasha because that's when the kids stayed at their father's Vasant Vihar home in south Delhi. This was however an interim arrangement ordered by the trial court which Natasha didn't mind, and which possibly rules out her being depressed because of her boys.

A happy and upbeat state of mind was also something that Natasha's maids, Jessie and Esther, corroborated. According to the two, when she came home after spending time with her friends at 9.30 pm on March 16, she seemed chirpy. She had an early dinner, followed by two cups of tea after which she slipped into a nightie and went to bed. A phone call at around 11.15 pm woke her up and she left home 15 minutes later. She returned at 15 minutes past midnight to collect the bottle of whisky, which indicated to the maids that she probably was with someone.That was the last they saw of her. A designer acquaintance, Geetanjali Kashyap, is supposed to have met Natasha in the Hyatt lobby later that night. She told the police that she found Natasha's disposition "cheerful" but was surprised to see a liquor bottle in her hand.

A slew of SMS messages sent out to friends from Natasha's cellphone ranged from the vague "I'm going to fly 2nite"; ominous, "tell the kids to get the truth from their father"; philosophical, "I need another world"; to downright baffling, "let's keep in touch". Rony Kaul, a photographer friend whose wife Saumya Kaul was one of the last recipients of Natasha's written goodbyes, says this was the first time Natasha had sent out messages of such a cryptic nature.

Friends of Natasha's wonder about the motives behind a suicide, which the police say it was. Why did a supposedly happy woman wake up in the middle of the night and suddenly decide to take her life is the question her friends are grappling with. There are some pointers though: financial insecurity (Natasha was struggling to maintain her lifestyle for sometime now); and a nagging illness—autopsy reports suggest a possible malignancy in the uterus.

Niggling questions remain (see box). Natasha's divorced parents and two brothers are tight-lipped. Her younger brother, Shareef Masri, burst out in front of waiting TV cameras, promising to 'see' the unnamed killer in hell when he came to the Safdarjung Hospital mortuary. But the next day he clarified that he was united in grief with his sister's matrimonial family. Before the week was out, both the Masris and the Singhs were grieving together; the police seemed to have settled on suicide, and the story had moved out of the front pages. But the capital's Page 3 set continued to speculate feverishly: was it suicide or murder? There are no answers yet.