Bluster, anger, nervousness, but there's also a realisation that war is a no-win deal 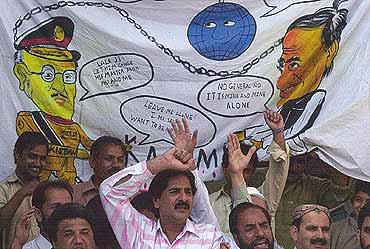 outlookindia.com
-0001-11-30T00:00:00+0553
As you drive into Islamabad, a monstrous fibre-glass replica of the Chagai Mountains greets you. These days, hectic efforts are on to refurbish the symbol of Pakistan's nuclear capabilities, to spruce it up for the fourth anniversary of the nuclear tests. It's a reminder of Pakistan's possession of nuclear deterrence, it's presumably also an assurance to its citizens why India won't attack the country. It is also the reason why leaders from the West are making a beeline for Islamabad, hoping to pressure and persuade President Pervez Musharraf into granting concessions to New Delhi's satisfaction—and staving war between the two nuclear neighbours.

Yet the virile symbol of nuclear power isn't reassuring enough for many Pakistanis who are nervous at New Delhi's decision to send Indian naval ships into the Arabian Sea and they listen in trepidation to an increasingly bellicose Indian Prime Minister Atal Behari Vajpayee talk of a "decisive fight". The popular feeling here is to expect some military action on the LoC and immense pressure on the International Border. The dominant fear in the streets is that India could target Pakistan's nuclear installations through deadly air strikes, that it would suit the US, which has been apprehensive about Pakistani nukes falling into the hands of jehadis.

Such popular sentiments stem from Washington's ostensible reluctance to pressure New Delhi into de-escalating at the border, reserving its coercive tactics for nudging Musharraf into making placatory statements. The latest was his statement following the assassination of Abdul Ghani Lone: "No organisation in Pakistan will be allowed to indulge in terrorism in the name of Kashmir. However, Pakistan would continue to support Kashmiris morally, politically and diplomatically." The streets are sullen because there is no apparent international sympathy for Pakistan's stance on Kashmir.

Some strategic thinkers too feel the US hasn't restrained India. Dr Shireen Mazari, chairperson, Institute of Strategic Studies, told Outlook, "We in Pakistan had been expecting the Indians to resort to war since December 2001. After all, it was quite clear that the massive mobilisation undertaken by India has come at great economic cost and can't simply be understood in terms of a political-diplomatic pressure ploy. New Delhi had a well-planned strategy when it cut off all train, road and air travel links with Pakistan and downsized its diplomatic missions. Most important, the latest Indian moves towards a military encounter with Pakistan could not have happened without the tacit approval of the US."

Mazari's argument has been further buttressed through the release of the US state department's report on the so-called sponsors of terrorism. The report praised Musharraf and yet simultaneously asked Islamabad whether it couldn't also eliminate extremism in India, a country described as a "fellow victim of terrorism". No wonder then the belief that the US is leaning more on Musharraf than India.

Statements of visiting dignitaries asking Musharraf to initiate steps to defuse the ciris have also helped fashion such perceptions. For instance, European Commission commissioner Chris Patten told Outlook, "The way to reduce tension between the two countries is for the Musharraf government to strictly implement the UN Security Council resolution 1373. This requires all states to prevent those who finance, plan, facilitate or commit terrorist acts from using their respective territories for those purposes against other countries and their citizens." He also reminded the military regime that Musharraf's January 12 speech had to be strictly adhered to.

Patten's message was clear to Musharraf, who through the week was huddled in meetings with his cabinet, the National Security Council and editors.Many from the media didn't shy away from telling the general that Pakistan's interests should come first and no jehadi should be allowed to use Pakistani soil to operate inside Kashmir. Islamabad will continue to feel the squeeze during the forthcoming visits of British foreign secretary Jack Straw and US deputy secretary of state Richard Armitage. Some say Musharraf's litmus test now lies in averting a fourth Indo-Pak war.

The section visibly delighted at Musharraf's discomfort is a clutch of political parties. Most have refused to attend Musharraf's parleys. "Why should we go to see him? How has he treated us all these years?" asks a political leader. The All Parties Conference even passed a resolution saying, "We demand his immediate resignation from the office of the President and a caretaker government of national consensus. Musharraf should concentrate on his job as the chief of army staff and work for the defence of the country."

Political parties are apprehensive about Musharraf as he had kept the nation in the dark about his ill-advised Kargil operation. As Asfandyar Wali Khan, president of the Awami National Party, told Outlook, "Bruce Riedel's report that the Pakistan military was preparing to deploy its nuclear weaponry is very disturbing, especially because it was kept secret from the people of Pakistan and their representatives. Imagine the consequences had we used our nukes."

There are others who are annoyed at India's bullying, its reluctance to resolve the Kashmir dispute amicably and its brazen demonstration of military might. Cautions economist Dr Akmal Husain, "The voice of reason inside and outside the Indian establishment must wean the government away from treading the destructive path. What use is it of talking about the glorious Indian civilisation if it can't enhance life? The pursuit of power and hegemony by the Indian state over its own minorities and its neighbouring states is an empty pursuit because it is devoid of humanity and reason."

Some think New Delhi wants to exploit the issue of cross-border terrorism to attack Pakistan. Otherwise, they argue, it wouldn't have been allergic to joint patrolling of the LoC, nor to the presence of UN observers to monitor infiltration from Pakistan. This school of opinion believes India isn't willing to accept such measures because it wouldn't be able to justify its suppression of the struggle for self-determination in Kashmir, which isn't expected to subside at the cessation of infiltration.

Terrorist killings in Kashmir, though, have increasingly strained and confused Islamabad. For instance, while the state-run Pakistan Television accused the Indian security agencies of killing Lone, the foreign office blamed the Shiv Sena whose activists had manhandled him at a press conference last month. Aware of the international repercussions of terrorist attacks in Kashmir, the Pakistani establishment can't completely distance itself from the movement there. The war-mongering has also impacted its economy, weakened as it had already been because of bombings in Pakistan and the war against terrorism. Fears of an Indo-Pak war have seen the Karachi Stock Exchange continue on its downward spiral.

Official Pakistan feels the only way the existing crisis could be defused is dialogue. An additional secretary in the foreign office told Outlook, "The international community should not give up its efforts to defuse tension and we hope that finally India will see reason. We are ready for resumption of dialogue." But this could perhaps be hoping for too much from Vajpayee, who has his own problems at home.