The US uses the aid card to muster support on Iraq 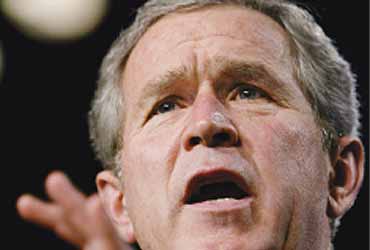 outlookindia.com
-0001-11-30T00:00:00+0553
Grim-faced diplomats emerging from a closed-door UN Security Council meeting on Iraq on Thursday, February 27, described the atmosphere during the four-hour deliberation as "terrible, bitter and intense". They were unable to agree on basic issues like setting a date for weapons inspectors to report next to the council.

A competing memorandum was put forward by chief doves France, Germany and Russia. This argues that while "full and effective disarmament remains the imperative object of the international community", at least four more months of stringent inspections are necessary to disarm Iraq and military force against Iraq isn't yet justified.

The resolution has trained the spotlight on the Security Council's so-called 'floating' members—nine positive votes (and no veto from the permanent members) out of 15 are needed to pass any UN resolution. The US diplomats resorted to some arm-twisting in Washington and in the capitals of member countries. An Iraqi diplomat also did the rounds to cash in on Muslim sentiment.

Munir Akram, Pakistan's UN ambassador, said Islamabad would directly take the decision on its vote. US diplomats boast that Pakistani President Pervez Musharraf would back the resolution. There are no prizes for guessing why. In exchange for its support to the US against the Taliban, Pakistan received about $1.3 billion from Washington, while a $15-billion loan was rescheduled by the Paris Club at Washington's behest. Pakistan's foreign exchange reserves have risen to a record high of $9.5 billion, compared to $500 million before the war on terror, state department officials claim.

How do the other 'floating' members stack up? Bulgaria is a firm supporter of the hawks despite stern warnings from the European Union, which it desperately wants to join. The three African nations—Angola, Cameroon and Guinea—are being targeted as potential 'swing votes'. They, like the two Latin American nations, Mexico and Chile, are wary of the stark economic consequences if they vote against the US. "It all boils down to money. This is primitive diplomacy," a Latin American diplomat told Outlook. On the other side are France, China and Russia, each enjoying veto powers. Germany co-sponsored the French memorandum and Syria, expectedly, staunchly opposed the war.

The Thursday talks enthused both pro- and anti-war groups. Leaked passages from chief weapons inspector Hans Blix's 17-page update to the UN showed he was critical of Iraq's non-compliance. Iraq then quickly agreed to scrap its al-Samoud II missile programme, sparking speculations on Blix's verdict on March 1. He will present a final report to the Security Council on March 7, followed by a debate before the resolution is finally put to vote.