Puppet On A Caste Chain

"The vice-president and clerk oppose everything I suggest. When I complained to the BDO, he asked me to not to create problems." 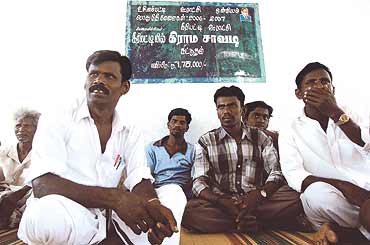 M. Balusamy sweats when asked to stay for tea. The president of the Keeripatti village panchayat is accompanied by a 9-mm carbine-wielding District Armed Reserve Police officer. After 11 years and 18 elections, the Keeripatti panchayat, one of the 2,250 panchayats (of a total of 12,609) reserved for Dalits in Tamil Nadu, has a Dalit president. Before this, caste Hindus would prop up ‘dummy’ candidates, ensure they won and force them to resign soon after. In six months, the State Election Commission would hold fresh elections. If a Dalit contested, he’d be ostracised. P. Poongodi has to live in Chennai as he hasn’t been able to return to Keeripatti because he contested the ’05 polls, even though he lost. The 14 families perceived to be close to him face a social boycott. And when a Dalit does get elected, as Baluswamy did, he has little say in decision-making. "The vice-president and clerk oppose everything I suggest," says Balusamy. "When I complained to the BDO, he asked me to not to create problems. I’m just a puppet. After five years, this security guard will go. Who’ll protect me then?"