Pugmarks In A Dragon Den

Can India capitalise on the Red Giant’s hiccups to regain lost ground in resource-rich Africa? 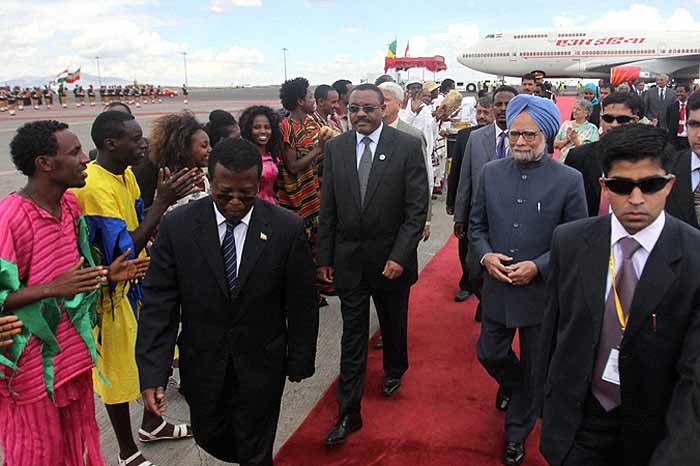 Not too far away from the hall of the African Union (AU) headquarters in Addis Ababa, Ethiopia, where Prime Minister Manmohan Singh spoke at the India-Africa summit on May 25, is a construction site where work is in progress at a frenetic pace. Spread over a sprawling 11 hectares, this is the site of the new $150 million Conference Centre of the African Union, billed as China’s “gift” to the African people and expected to be completed next year. Such lavish gifts sure are pouring in from Beijing—a $1.5 billion telecom project for Ethiopia, several dams, railway lines, roads, hospitals and, believe it or not, over 50 stadia wherein most of the matches of the African Cup of Nations, the continent’s most popular football tournament, are played.

But the growing, even daunting, Chinese presence in Africa has raised serious questions among the locals about Beijing’s intentions in the continent. Stories about China’s slap-dash method of conducting business in Africa abound. There are reports of cracks appearing on the walls of a hospital that the Chinese had recently built in Luanda, Angola; of rains washing away parts of the Lusaka-Chirundu road that Beijing had built in Zambia. Reports of shoddy work are topped off with tales of the ill-treatment meted out to local workers at the hands of Chinese managers. Some African countries are also passionately debating the inimical impact of fake Chinese medicines and about Chinese goods that are cheap both in price and in quality. Stories like these have sullied the image of the Chinese, earning them the unsavoury sobriquet, “Mercantilist Mandarins”, or “new rulers”. A senior Ghanaian official told Outlook, “China can never be an equal partner. It sees itself as the new superpower and wants to eat up everybody and everything.”

Does this provide India an opportunity to expand its influence in Africa, where China appears to be stumbling? Will New Delhi get a second chance to re-establish its lost eminence in Africa? India’s engagement with Africa pre-dates that of the Chinese, though both countries played the lead role in encouraging many of the African nations to break free of the colonial yoke. India slipped in the ’80s and ’90s, or you could say China, employing its new economic muscle, forged far ahead in deepening ties with the resource-rich continent.

The PM’s overtures have not put paid to Africa’s impression that India is not aggressive enough to weaken China’s hold.

Realising that it had fallen behind in the race for resources, New Delhi made fresh overtures to the continent’s 53 nations through the first India-Africa Summit in 2008. Last week’s summit in Addis Abbaba, where Manmohan announced a $5.7 billion line of credit and a string of projects for Africa, was the second. Despite such ebullient shows of its intent, African officials say India, in comparison to China, simply isn’t “aggressive enough” in announcing its presence in Africa. But Vivek Katju, secretary (west) in the ministry of external affairs argues, “India is not in competition in Africa with any other country.”

India’s current policy is to engage Africa at three levels—bilateral, regional and pan-African. This is mirrored in most of the Indian projects here—a result of, as Katju says, India’s belief in “a consultative process in our interaction and engagement with Africa. The India-Africa Summit is part of this consultative process”. Parse Katju’s statement to arrive at the profound truth—India is wary of simply imitating the Chinese model, which favours promoting infrastructure development in those countries where Beijing can corner oil and other resources for future use.

Indeed, the consultative process India talks about is not a mere shibboleth—for instance, the AU jointly chooses the nations to participate in the India-Africa summit, ensuring the summit does not become unwieldy and retains a pan-African perspective on growth. In contrast to the 15 nations participating in the India-Africa summit, China’s summit with the continent had a whopping 40-plus nations. China pulls them together because of its economic muscle, but invariably, say Africans, some countries end up running away with the cake.

Yet, until recently, India too was in thrall of the Chinese model. It was engaged in the oil and mining sectors and executed eye-popping projects like the controversial Presidential House in Ghana, which was bereft of any value other than generating hype. Common Ghanaians thought the expenditure was a colossal waste, and the Ghanaian president, instead of courting opprobium, just gave it to the foreign ministry.

Obviously, the new Indian model isn’t an example of altruism, just better strategy—or at least that is what is hoped. Like China, India is widening its footprint in Africa because of its needs for energy, other mineral resources, and an emerging African market for its goods and technology. For instance, India has extended the $5.7 billion line of credit for different projects in Africa on the understanding that those contracts will be given to Indian companies. Abandoning China’s model has seen India harness its own strengths, particularly in the knowledge industry, and think of projects that provide commercial gains or earn the goodwill of the people.

This new thinking was obvious in the slew of projects announced at last week’s summit. So India will now build a railway line between Ethiopia and Djibouti. Apart from the 22,000 scholarships India will offer Africans, the Pan African e-Network Project it has set up outside the Senegalese capital of Dakar has enabled students to attend classes in leading Indian colleges and also facilitated tele-medicine and consultations between African and Indian doctors during complex surgeries. Forty-seven of the 53 African nations have already joined the project, and the number of registered students is expected to increase from the present 4,500 to 10,000 in the next few years. “It is a shining example of South-South cooperation which bridges the digital divide in the African continent,” says J.L. Kachroo, project director of tcil in Senegal. “Through the project India is trying to bring the best educational facilities and healthcare to the rural areas of Africa.”

Encouraged, New Delhi has now decided to set up an India-Africa Virtual University for those interested in postgraduate studies, as also English language training and IT centres, which are already very popular in Africa. As Sonia, a young girl in Lagos, Nigeria, told Outlook, “I’m saving money to get admitted to one of the IT centres run by India. I realise that without such higher and specialised training, there is very little for me in the job market.” Apart from skilling human resources, India has offered to aid in capacity building through centres and parks for rural technology, food testing and food processing, business incubation and geo-informatics applications for rural development.

India companies are already selling a diverse range of products—from buses and trucks to white goods and cosmetics—in the African market. Still, apart from, say, the Tatas or Airtel, no Indian company has emerged as a big name in Africa. Indian businessmen say their government does not support them as much as Beijing does its own. The result is, as an Indian businessman in Senegal says, “Indian firms are edged out of big contracts because of the lack of financial support from the government.”

So the debate over the Chinese model’s efficacy still persists, as is to be expected. Experts like Deborah Brautigam, author of Dragon’s Gift, a study of Chinese engagement with Africa, argue that much of the negative hype about China’s activities in the western media is motivated and aimed at countering Beijing’s growing role in the continent. In an interview, she said China had brought about a course correction in its policy, but this the media ignored reporting.

It’s unanimously agreed, though, that the presence of China, India and Brazil has ensured that African nations are not solely dependent on the West. Former Ghanaian president J.A. Kufour told Outlook, “Even today, it will be very difficult for the most dynamic African entrepreneur to get a million-dollar credit from any major western bank.” Since the US, India and China are in Africa to further their own interests, Kefour cautions, “Africa should get into these engagements with its eyes wide open.” Adds a senior Senegalese journalist, “As long as our infrastructure is being built and jobs are being created, it does not matter whether they are coming from India, China or somewhere else.”

Perhaps, therein lies a lesson for India. That no matter how hard New Delhi pursues a policy that is different from its rivals, India can be a winner in Africa only if it is able to generate wealth and alleviate poverty for its people. From these gains, it can reap a rich political dividend—the support of 53 African nations could help India bag a permanent seat in the UN Security Council.

Warnings By The Boxful