Another riot in Bengal. Mamata is back to the wall, as the BJP cries appeasement. 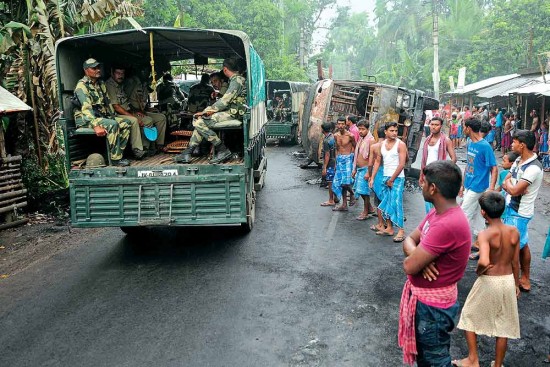 Assembly elections are three years away, but the air of polarisation in West Bengal would suit a pre-poll scenario. And the phrase ‘President’s rule’ is begi­nning to be uttered. A year after the Malda riots, the state is in the grip of violence again—this time over a Facebook post by a class 11 student, deemed derogatory to the sentiments of the Muslim community. As incidents of rioting continued to be rep­orted from towns in North 24 Parganas district, CM Mamata Bane­rjee made an impassioned plea to both communities to help keep peace. Critics were not satisfied, though.

Observers point out this is the first time in the six years since she came to power in 2011 that Mamata has had to make such an appeal. During a press meet at the secretariat on July 4, she said, “I want to tell both communities and their leaders, I have had to suffer a lot of humiliation because of you. I am not going to tolerate this hooliganism.” Though add­ressed to both sides, one in particular seemed the intended recipient. Recent politics offers clues, with Mama­ta’s overt wooing of the Muslim community being matched by an aggressive Hindutva pitch by the BJP in an increasingly bipolar field.