The govt decision to amend the Constitution restarts the quota debate 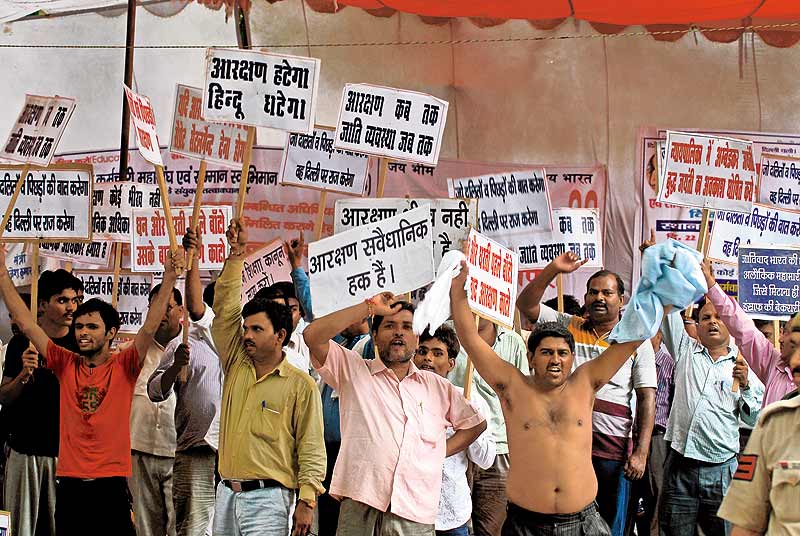 The civil services is the holy grail of lakhs of aspirants seeking high-level government jobs. Every year, there’s the odd story or two of candidates from remote parts making it to the IAS, IFS, IPS or other premier civil service branches against great odds. But such stories are rare. No wonder the Centre’s recent move to introduce quotas in promotions in government jobs through a constitutional amendment—essentially to blunt a Supreme Court decision against such quotas—has its share of supporters and opponents. For, it touches on a whole gamut of issues, from the human to the political to the humdrum realm of administration.

In the coming weeks, the government will move to amend the Constitution yet again, making requisite changes in Article 16—dealing with equality of opportunity in matters of public employment. Beyond the obvious question of political advantage, the precise mode and language the government employs to do this will be crucial. At a definitional level, say, ‘backwardness’ may be deemed as an automatically fixed characteristic of the Scheduled Castes/Tribes. This naturally has implications well beyond surface-level politics, spilling over into more foundational levels. What indeed is backwardness? Is it necessarily caste-specific? To what extent can the logic of reservations be applied, assuming its efficacy as a tool to bring about greater equality in administrative services? Is there an in-built resistance in the system that justifies applying it to promotions? There is a sizeable band of naysayers to the government’s move, especially when the Supreme Court has ruled that quotas in promotions are unconstitutional.

“The govt cannot from time to time introduce quotas. It must invest on backwards so that they are able to compete better.”
Anil K. Gupta, IIM Ahmedabad

Maintaining a policy of overall equity is important. For the general category aspirant, a quota in promotions is seen as an additional concession offered to SCs and STs. They already have a higher number of attempts to crack the exams: six, as against three for the general category. Plus, there is an age relaxation at the entry level. Yet, there are some markers that call for a deeper inquiry. Promotions, though time-bound, put them in the same competitive pool alongside others. How many candidates from the SC and ST pools go on to become joint secretaries, additional secretaries and secretaries? Do the low numbers have to do only with merit? Or does the Indian polity, which occasionally puts members of the most depressed castes in token ceremonial positions at the highest levels, operate with an institutional bias at lower levels? And does that serve to entrench a certain kind of social experience in administration?

A cursory look at central government figures (Department of Personnel, 2010) shows the percentage of SCs and STs in Group A services is 12.2 and 4.8 respectively. In Group B, it’s 14.7 and 5.4 respectively. The percentages rise at the level of safai karamcharis to 49.9 per cent in the case of SCs. As one scans the list at the levels of secretaries, additional secretaries and joint secretaries, the figures shrink drastically—there’s no secretary from the SC or ST pools; two additional secretaries; 14 joint secretaries; and 10 director-level officers from these pools.

The anomalies in representation operate in the state services too—from where a pool of officers also attains the IAS/IPS rank. The promotion rules vary state to state but it takes nearly 10 to 15 years for a Group I officer from a state to get selected to the coveted IAS cadre. And here, the representation of SC/ST promotees is indeed low. It’s these numbers that beg the question of inclusion. Says a senior official, “The move to introduce reservations here will certainly widen the pool for SCs and STs in the civil services.”

That the civil services were one of the privileges that came relatively easy for social groups that were not discriminated against is fairly obvious to anyone who has observed the emergence of a certain privileged and entrenched class over the decades. Old-timers insist the civil services are casteless. Says former cabinet secretary T.S.R. Subramanian, “An individual ceases to have a caste identity when he or she gets into the services. The civil services are instruments of services and a classless infrastructure. It will affect officer morale if reservations are introduced in promotions.” While he agrees that merit is often subjective, Subramanian believes the services are free of caste feelings and that the status quo should be maintained. Reservations could foul the waters.

“The bogey of merit raised in the context of quotas doesn’t really hold. Quality is hardly ever compromised.”
S. Parasuraman, Director, TISS

S. Parasuraman, director, Tata Institute of Social Sciences (TISS), offers a counter-example. His  institute has caste-based reservations at all levels of teaching, and has only been enriched by that policy, he says. “The bogey of quality and merit raised in the context of reservations really doesn’t hold, as quality is seldom compromised. There has to be a push from the government, along with capacity building for the disadvantaged Dalit student. Forward castes have always had the benefit of opportunity,” he says.

But Prof Anil Gupta of IIM Ahmedabad feels this is treating the symptom. “The government cannot from time to time introduce reservations. A time comes in its life when it needs to show how really inclusive it is. There are several things the government should be doing in capacity building: invest more money on depressed candidates so that they can compete. But it chooses the easy way out.”

Prof Gupta’s suggestions to then law minister Veerappa Moily were ignored. He had suggested expansion in opportunities for first-generation learners to enter the educational system; coaching to compete for the civil services and a mentoring and tracking system for those who did make the entry. “The government is not serious about bringing rigorous affirmative action and instead continues in allowing reservations forever,” he says.

The courts have consistently held that there should be quantifiable data showing backwardness of a class and inadequacy of representation to have quotas. Efficiency in administration and a 50 per cent cap on reservations are other benchmarks it follows. And Parliament has in general held that caste and not class is the benchmark for deprivation. The debate is by no means settled.

‘Some PPPs Have Issues, But So Do Most Public Projects’