'Priyaranjan Dasmunshi Has Set A Bad Precedent By Viewing The Film'

From a call to hold back its release to granting an adult certification, with a prominent disclaimer that it was a work of fiction, it was the I&B ministry which took all the decisions. The Censor Board chairperson on the parallel body. 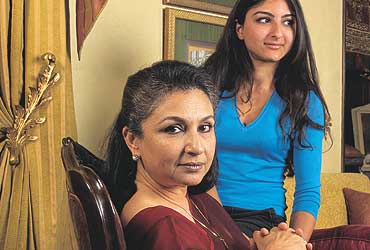 Who calls the shots on controversial films—the censor board or the information and broadcasting ministry? Why is it that Ron Howard's much-debated film The Da Vinci Code made it to Indian theatres only after I&B minister Priyaranjan Dasmunshi deemed it fit for viewing? Always accused of overplaying its hand in defining the moral code suitable for the public, this time too the ministry decided to play censor after Christian organisations protested the "blasphemous contents" in the film. From a call to hold back its release to granting an adult certification, with a prominent disclaimer that it was a work of fiction, it was the I&B ministry which took all the decisions.

For most part of the controversy, actress and Censor Board chairperson Sharmila Tagore, an appointee of the UPA government, was out of the country. She did say that she was in touch with the events that unfolded and was aware of the heat generated following the decision of the censor board to certify and release the film. Speaking for the first time since the controversy broke, Tagore says Dasmunshi's intervention sets an unhealthy precedent and creates a parallel censor board. Excerpts from an interview to Anuradha Raman:

Why do you think Christian bodies protested against The Da Vinci Code, particularly singling out the Censor Board for clearing the film?
I think the protests have to be seen in a particular context. Following the release of some lewd film posters (like the one for Naughty Nun), some communities were feeling increasingly marginalised. Then, recent political happenings also generated a feeling that nobody was paying attention to them. They were getting more and more confrontationist. The government stepped in to initiate a confidence-building exercise, and I welcome it. But I must tell...