Boating for beginners on Hussainsagar lake; open Alankrita for some Andhra heritage and the 'saint' who did India proud... 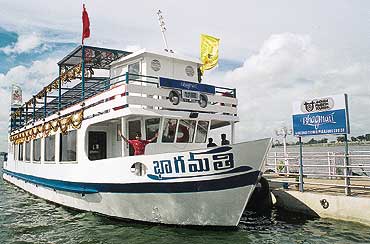 Sailing Showboat
In a bid to woo tourists, the Andhra Pradesh Tourism Development Corporation has hit upon a novel idea—launching cruisers on the placid waters of the city’s landmark, the Hussainsagar lake. The project was flagged off with the launch of the Bhagirathi cruiser. Now Bhagmati, a twin-decked luxury launch, is also merrily sailing alongside.

Named after the legendary queen of Nizam Mohammed Quli Qutub Shah, Bhagmati has an air-conditioned restaurant on the main deck while the top deck has a stage where the culture aficionados can enjoy a play or a dance programme. The entry fee for a one-hour tour of the lake costs Rs 50 for adults and Rs 30 for children during the day. At night, prices double to Rs 100 for adults and Rs 60 for children. The launch can also be booked for two hours every day between 11 am to 1 pm and from 1.30 pm to 3.30 pm for Rs 4,000. The rate, of course, doubles during the night between 8.30 pm to 11 pm. As always, the cruise has also become popular with the filmi crowd. Rates for a seven-hour shoot for the big screen has been fixed at Rs 15,000 and for TV serials it’s Rs 4,000 per two-and-a-half hours.

Many have fallen for Bhagmati’s charms. "The city looks so beautiful from the lake," says N. Satyavathi, a software engineer, who keeps bringing her only kid back for rides.
M.S. Shanker

To down the main road of Rajiv Rahadari near Tumukunta, about 20 km from the Secunderabad railway station, and step into the big gate that stares back at you. That’s Alankrita, best described as Andhra’s new gateway to the ethnic world. Alankrita is a happening heritage resort and corporate retreat that takes one away from the hustle and bustle of the city. In the urban landscape, increasingly sporting glass and cement structures, it is refreshing to see buildings made the traditional way using pillars and tiles. A brainchild of Dr D.S. Deendayal, Alankrita transports you to a bygone era. "It is pleasingly different from the concrete jungles," says Dr Deendayal. Most of the artefacts used to beautify the resort were bought by Deendayal himself and are a part of his personal collection. The place is ideal for meditation and discourse and yoga. For self-introspection, there is a temple thrown in as well. Alankrita also has its touch of the banal—a sprawling mandap for marriages and conference halls for corporate houses, besides a multi-cuisine restaurant.
M.S. Shanker

Few establishments in Thiruvananthapuram offer the executive-style comforts that jet-lagged businessmen look forward to. Now the Muthoot Plaza, the first five-star business hotel in Thiruvananthapuram, hopes to usher in a new era in hospitality for the harried executive class. Located at the city-centre, the hotel boasts "Turn of the Millennium Exteriors" in its lobbies and guest rooms. It has another big plus—the top brass of the state tourism department are actively promoting the hotel, by word of mouth as well as frequency of visits. And that can surely help.
Venu Menon

Cities in India have been eternally struggling with the problem of street dogs—you put away ten street dogs and a week later another ten will replace them. Bangalore has found a solution in abc (Animal Birth Control). Launched in October last year, this is a joint effort between animal welfare organisations and the City Corporation. Says Sangeetha Lakshminarayanan of Krupa, a 24-hour helpline for animals: "who recommends abc for South Asian countries because of our peculiar physical environment that is different from the developed countries." abc stops street dogs from multiplying and makes them less aggressive during mating season. Since life expectancy of a street dog is only 4 to 5 years, this leads to a gradual reduction in the street dog population. A few months ago, Krupa started a 24-hour helpline with the help of the Bangalore City Corporation and the Himalaya Drug Company. The helpline counsels callers on abc, undertakes treatment of sick/injured animals and networks with other animal welfare organisations. So, if you see any animal—bovine, feline, canine, reptile—in distress, call Krupa, 080-2224541, or visit www.lovinganimals.com.
Rehmat Merchant

Koothu-p-pattarai, a theatre group in Chennai, has been trying to revive the dying folk art form of Theru-Koothu (street theatre) since 1977. Last week, for the first time, it got a troop from Thanjavur—Karambai Aravaan Kalabali Nadaga Mandaram—to perform in Chennai. Led by an old but energetic K.M. Rajangam, the group gave a day-long performance at Alliance Francaise interspersed with discussions with urban dance and theatre personalities such as Anitha Rathnam, Karaikudi Subramanian, Prof Ramanujan and C. Ravindran. The Karambai group, unlike koothu groups from North Arcot district, are not full-time professionals. They perform only once a year and it is a deeply religious affair.

Interestingly, they perform only Aravaan Kalabali, a full-length exposition of a remote incident in Mahabharatha—the sacrifice of Aravaan, one of Arjuna’s sons in order to ensure victory in the Kurukshetra war. What was unique was the actors playing the important roles of Krishna and Kali feeling "possessed" every now and then; they had to be physically restrained when possessed, such is the emotion invested in a character. But sorry, no roles for women in this show.

As if one were not enough, Asianet Communications Limited has launched a second Malayalam channel. This one, however, overtly and consciously targets the non-resident Malayalis. Called Asianet Global, the round-the-clock channel is being pitched as a more serious counterpart to the existing entertainment channel. The content aims to be "hard-hitting, investigative, crisp", according to the company press release and is meant for the serious, high-minded viewer. For the ordinary souls, the so-called "masses", there will be the usual fare of talk shows and the rest. The new channel is expected to tap Gulf-based Malayalis’ nostalgia for God’s Own Country. Hope that translates into some committed viewership as well.
Venu Menon

For singles in India’s silicon city Bangalore, a chatmate or soulmate is now just a phone call away. A new dating voice-mail service was started in the city a while ago. It comes at an affordable tariff and with built-in checks to shake off rogue wooers. Started by Vivekananda Desai, a 35-year-old environment engineer, the voice mail offers five categories of services: Casual, activity-related, soulmate search, telechat and a singles section. Desai chose to launch the service in Bangalore because it has "lots of singles looking for partners." All users, however, are screened beforehand through an aptitude and personality test by a psychiatrist before they get to leave messages on the dating service.
B.R. Srikanth

Paes and Bhupati are not the only players who have done India proud on the tennis circuit. Harry ‘Boniface’ Prabhu was India’s lone entry in the 2001 Japan Open Wheelchair Tennis Championship, but he made sure he did not return empty handed. He won the QAD (quadriplegic) B, and is now practicing for the US Open (October 2001). "I feel good about my performance and am determined to become the number one player in the world," he said after his successful trip to Japan. At 28, Prabhu has many firsts to his credit. He is the first Indian to win a medal at an International ParaOlympic Games and the first Indian wheelchair tennis player to reach the finals of the US Open and Australian Open Grand Slam. He also won the Sydney International Wheelchair Open in 1999. Prabhu was afflicted by a crippling disease when he was just three and is paralysed from the hip. He got the name ‘Boniface’ because he shares his birthday with a saint.
B.R. Srikanth

A Shoot & A Cause

Sachin Tendulkar might have given a ‘lame’ excuse to avoid playing the one-day tri-series in Sri Lanka but he was in Chennai on a whirlwind though hush-hush visit. Sachin was in the city for a photo shoot with high-profile fashion photographer Atul Kasbekar. With the Chepauk stadium as backdrop, the shoot was reportedly for the endorsement of a new car from the Fiat stable. The media was kept away but the local Child Relief and You got wind of Sachin’s presence in town. It didn’t take much convincing to get Sachin to spend an hour with the cry kids. The Little Master always play for a good cause.
S. Anand