Wish one could pretend 2001 never happened! 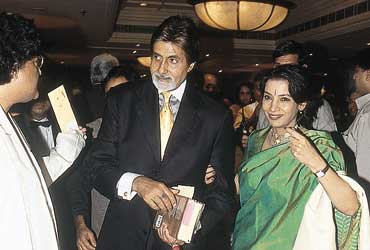 They say Delhi is a city of contradictions but since half the people in Delhi’s so-called celeb circuit can barely spell the word it really doesn’t matter if you confuse contradictions with cocktails which is exactly what Delhi was in 2001.

The year began with a bang. Amar Singh had his famous birthday bash spread over two days and two venues with approximately the same sprinkling of his brothers (read Anil Ambani, Amitabh Bachchan, Subrato Roy), also known as the holy troika considering the number of pilgrimages they take together. The affair was grand and though Singh did make a generous contribution to the Gujarat Relief Fund, the honour of the Pretender Party must go to his: everyone who was there was there because he wanted them there. The relief bit happened because the earthquake did!

Close on the heels of this much-talked-about party came the news that some kind souls in the government were caught on camera taking money and so it was that Honest Pretender George Fernandes was ejected from the Cabinet and a Commission of Inquiry appointed which till this very day toils over finding out the truth but which like all commissions will keep getting extensions till everyone forgets its raison d’etre. But where Delhi is concerned, the Honest Pretender badge was worn with equal aplomb by renowned government servants like B.P. Verma and Someshwar Mishra not to mention the Honest Power Broker-cum-Industrialist, Ashok Chaturvedi.

Pretender Broadcaster Sushma Swaraj continued to wear her Bharatiyata on her rather large bindi and ensured DD went even further down the chute. She was best being Pretender Film Distributor by organising at the government-owned Mahadev auditorium films—from Asoka (Pretender Art Film of the Year) to Kabhi Khushi whatever to Monsoon Wedding.

But then if it’s Delhi, can pretension be far behind? No less than 712 Pretender Designers were added to Delhi’s fashfrat which is why Karol Bagh will now be the fashion mecca.

We continued to have our share of Pretender Activists like Arundhati Roy. We did have all those silent marches for gay men and marches on Kargil Day and marches for sex workers; I’ve always thought India has more activists than causes.
Towards the year-end, we had Pretender Filmmaker Mira Nair unleash a shaadi video and we silently applauded since all the goras in Venice had done so. Thus, Monsoon Wedding became the film of the year even as Subbirami Reddy threw yet another Pretender-I-know-all-the-government-secys bash for the winners of the National Film Awards. It is another matter that all these winners are out of work today.

But the honours for the year will be incomplete sans mention of Beverage Pretenders (read coke addicts). We suddenly saw them on Page 1 instead of Page 3 and voila they disappeared only to return in time for the party season.

We also had our fair share of Pretender Charities (where the money was never to be seen) as we did Pretender Iftars: yes, the same parties which in the name of religion are meant to spread hatred. We also had Pretender Salvation Artists such as Sri Sri Ravi Shankar (and I am not referring to the sitarist) who suddenly appeared on the cover of an English weekly only to tell us to love our neighbours. Doesn’t he realise it’s passe to do so in Delhi!

As I write, we’re gearing up for Pretender Christmas and Pretender Millennium parties. I say millennium only because there are many I know who haven’t woken up to even basic realities! Wish one could pretend 2001 never happened!