Precipice On The Far Left 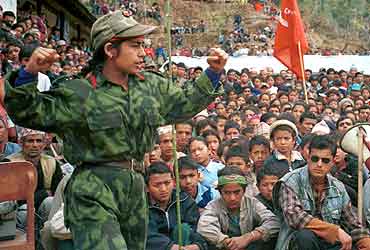 outlookindia.com
-0001-11-30T00:00:00+0553
The normally peaceful Himalayan kingdom of Nepal is rumbling again, caught in a fierce and bloody conflict between the state and the Maoist guerrillas. On November 26—precisely 48 hours after the Maoist insurgents unilaterally called off the four-month-old peace initiative and blasted security posts, including an army barrack in west Nepal's Dang district—the government clamped emergency, suspended the fundamental rights and despatched the army in pursuit of the guerrillas.

Scarcely ever has the Nepali state witnessed such a concerted challenge to its authority. In parallel attacks across the country through the week, the Maoists targeted Solu district in the northeast, Jajarkot in the midwest and capital Kathmandu, killing a total of 40 security men. No wonder the retribution was swift. The Maoists lost 200 of their fighters, including some of their top guerrillas, to the army offensive. If this trend continues, the radical left insurgents may not just find themselves in retreat but even face extinction in the large swathe of territory they control.

Prime Minister Sher Bahadur Deuba's reaction to the Maoist attacks resembled the response of former Indian PM P.V. Narasimha Rao to the destruction of the Babri Masjid on December 6, 1992. Just as Rao went bellicose after the Hindutva brigade betrayed his confidence, Deuba too adopted stern measures as soon as the three rounds of negotiations between the government and the Maoists collapsed and the guerrillas returned to their bush war. Deuba declared: "This is an act of perfidy. It's the government's legitimate duty to defeat terrorism and ensure safety of the citizens."

King Gyanendra gave his assent to the cabinet proposal of imposing emergency. Simultaneously, the government declared Communist Party of Nepal (Maoist) [CPN(M)] a terrorist organisation and entrusted the army with the power to combat terrorists. A resource-starved Nepal, too, has now joined the global campaign against terrorism, albeit within its own boundary and a trifle reluctantly.

The switch in the government's position, from undertaking a peace initiative to the deployment of the army, is understandable. For, the Maoist challenge threatens the unity of the country—not only do they want a republican state, they have also openly demanded autonomous ethnic administrative zones, questioning Nepal's territorial integrity in the shape it has existed for some 233 years.

But what has puzzled most is why the Maoists suddenly decided to return to their bush war, choosing the unprecedented provocative step of attacking an army barrack in Dang.

Theories abound but the most convincing of all these says the countrywide attacks last week was because of a growing schism between the political wing of the CPN(M) and its military outfit. For the latter, the use of violence to capture state power is non-negotiable. Party general secretary Prachanda chose to acquiesce to the military wing instead of continuing the peace talks with the government. Perhaps the party's flexibility prodded the military wing to assert itself—its nominees in the peace parleys had offered to relinquish their demand for turning into a 'communist republic', something none had expected them to do.

The six-year-old CPN(M) has a chequered history. It had earned the sympathy of people during the initial three years. But it frittered away that goodwill by setting a human rights record that was not only worse than that of the government but also their role model, Peru's Shining Path.So, last week's attacks have only served to push them into a corner.

The CPN(M)'s growth has been phenomenal. Beginning as a small political outfit, Jana Morcha, it made a humble debut in Nepal's first parliamentary elections 11 years ago. It decided to pull out of Parliament three years later, stung at the manner in which the 'corrupt parliamentary forces' split the party. Jana Morcha leader Baburam Bhattarai then took the initiative to bring together parties and individuals who believed that the road to power in Kathmandu began from the poverty-stricken districts of midwest Nepal—Jajarkot, Rukum, Rolpa, Salyan, Kalikot and Pyuthan.

For the unemployed and also politically-conscious youth, Bhattarai's slogan—"In raising the gun you have nothing to lose but the shackles of poverty"—was particularly alluring. The 'rule of the proletariat' also swayed a large number of Nepalis doing menial jobs in India, particularly Delhi, to join the CPN(M) in droves. No wonder in the early days top Maoist top leaders Baburam and Prachanda reportedly frequented Delhi, provoking Nepali leaders, including former PM G.P. Koirala, to allege that India was patronising the Maoists. Some believed this because the Maoists procured their weapons from the flourishing arms industry in West Bengal, Bihar and UP, easily accessible through the porous Indo-Nepal border.

Many sympathised with the outfit, especially human rights groups, both at home and abroad when its activists were arrested illegally, or during Operation Kilo Sera-II launched by the government four years ago. Kilo Sera was abandoned midway as it failed to contain the Maoists. As a government official says: "The failure was largely because the government didn't address the real cause behind the growth of the terrorist organisation. The operation became counter-productive." This was largely because brutal state repression engendered tremendous sympathy and support for the Maoists.

But in the last two years, the Maoists began perpetrating acts of barbarism on the police and civilians opposed to their brand of politics. For instance, in Dang the leadership failed to punish the guerrillas who allegedly raped a 49-year-old woman. Worse, in Rukumkot last April, Maoists disarmed a posse of policemen, tied their hands and threw them into pits before shooting them.

There is no denying that the Maoists also benefited from the confusion among successive governments in dealing with them. The latter neither favoured solution through peace parleys, nor deployed the army in pockets where Maoists reigned. Ironically, Deuba's fate seems to be linked with that of the Maoists—he was the PM in 1996 when the CPN(M) submitted a 40-point charter of demands, spelling out their goal of turning Nepal into a republic; and it's he who has now undertaken the most decisive step of curbing the Maoists. Deuba says he won't rest until every Maoist has been disarmed, depicting the imposition of emergency as an extension of the global fight against terror.

Within 48 hours of emergency, the PM briefed diplomatic representatives of nearly 40 countries about how the Maoists had forced him to swing to the other extreme. In these days of war against terrorism, words of support were quick to come, more significantly from the US and European countries. Not lagging behind was Nepal's giant neighbour in the south: Prime Minister Atal Behari Vajpayee spoke to King Gyanendra and Deuba, promising not to allow Maoists to use his country's territory against Nepal.New Delhi is also willing to extend all material support to Kathmandu in its fight against the Maoists.

All this should be music to Kathmandu's ears. Only last week, the Nepal police seized a large quantity of explosives despatched from Kathmandu at Kapilavastu. Also, the People's War and the Maoist Communist Centre have been providing material and moral support to their comrades across the border. There are also some unconfirmed reports that the ltte trained the Maoists.

Such reports have bolstered the guerrillas' image as a force capable of taking on the government. But now firmly pitted against the army and the first round of battle turning against them, a Maoist victory looks remote. A defeat now could reduce them to the status of the naxalites in the '70s.

'Maybe They Did Not Like My Face. And Work'