It was a bad film, period. Why did it have to become a threat to the collective Sikh soul? 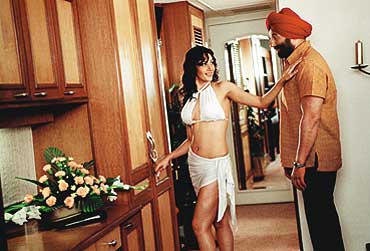 outlookindia.com
-0001-11-30T00:00:00+0553
I exhume the film scholar in me from the debris of cultural identities. I am, after all, not any old film scholar. I am a Sikh film scholar which makes my very existence somewhat special. I adorn a turban and I have an undyed flowing beard. My services are quite appropriately invoked in critical times such as these. Theoretically, I carry the burden of 'emmassification'. If I do not intervene, I am touchingly reminded, who will? Mercifully, such critical times are rare and therefore my interventions, if ever commissioned, equally rare and possibly even rarefied. There is a larger and related question here, though I am not sure if this is the space to challenge the theoretic pundits who choose not to recognise the burial ground they tread upon with supercilious nonchalance.

As of now, the link between the (Sikh?) terrorists and the reprehensible bomb blasts that resulted in at least one death and serious injuries to scores of spectators has not been established. The question, however, relates to inflammatory protests that preceded the eventual tragedy and inevitable closure of the theatres screening Jo Bole So Nihaal. Despite not being a devout Sikh, I still use "Sat Sri Akal" as a natural form of greeting whenever I meet fellow Sikhs. I am suddenly reminded that it forms part of a traditional war cry. Who am I fighting each time I greet someone from my 'own community', I wonder. How do I negotiate my creative self within the larger cultural history that expects me to approach Baba Farid with the same deference and intimacy as it does Kabir and Namdev? The Holy Book, the Guru Granth, appears to me to be about the new, compassionate, tolerant human kind. It recreates culturally a syncretic and vibrant space. It allows me to stand within that space and to articulate myself, freely and without fear. But suddenly I am scared. There are too many exegetes out there interpreting the texts with messianic authority. As a singer, I shall sing the holy text at home. I shall remain unheard. Outside, I shall sing "What do I know who I am, O Bulla". Or, was that Mevlana Rumi? Only that. There are too many rats crawling in the dark holding plastic in their claws, furtively moving under your seats.

Jo Bole So Nihaal is an act of terrible cinematic attrition. One feels like reverting to the halcyon days of the now-forgotten and anachronised film aesthetics. For, Mr Rawail thrives in tacky and very definitely obsolete mode of filmmaking. One can only think of the untiring Dev Anand as his genuine competitor when it comes to highly misplaced cinematic self-belief. It is a sad day that one has to write about such utterly inconsequential, boneless wonders. JBSN thrives on the crass stereotypes that we have lived with for many, many decades now. It has an unrelentingly boring, simplistic, gullible, pre-modern Sikh and a Jat to boot. The village community is likewise singularly sadistic. The mother—played by the unfortunate Surekha Sikri—is in a state of perpetual orgasmic telepathic communication with her offshore son. The agony is aggravated when the 'pre-modern Sikh and a Jat to boot' runs into a disaligned relationship with an equally pre-modern mimicry of a post-modern state.

The film was sinking without a trace. And then suddenly it was made to look like a major threat to the collective Sikh conscience. Why does the Sikh identity have to be so fragile? Why don't the zealots look inwards for a change? Why do we not look at how viciously our semi-literate leadership controls and runs our educational, cultural bodies? Why do we not self-critically review the insensitivity with which they are creating an intractable mess around our religious institutions? Why don't we ever wake up to the alarming drop in the sex-ratio and overall gender insensitivity? It is time we moved.

(The writer is a singer, cultural activist and teaches literature and cinema.

'How Can Any Person Change The Word Of God?'