Power Cuts For The People

Bodo-Muslim clashes are not new. Vested interests, though, are pinning the latest round on NDFB. 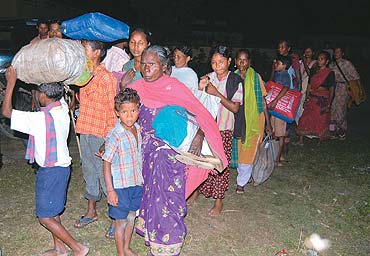 outlookindia.com
-0001-11-30T00:00:00+0553
Fifty dead, at least 15 of them in four instances of police firing, more than 150 injured and over a lakh displaced from their homes in 30 or more villages, mainly in northern Assam's Udalguri and Darrang districts. This has been the outcome of the clashes beginning October 3 between the ethnic Bodos and Muslim settlers in northern Assam. Though sparked off by some migrant settlers attacking a group of Bodo vigilantes, the state government alleged it wasn't really a clash between Bodos and Muslims but an attempt by a Bodo militant group to drive settlers out from the area.

"Rebels of the National Democratic Front of Bodoland (NDFB) have systematically launched an ethnic cleansing against the Muslim settlers so that they can gain control over land vacated by these people," Assam health minister and government spokesman Himanta Biswa Sarma told Outlook. According to him, rebels of the NDFB had provided fire cover to its supporters who torched Aminpara, a village of migrant settlers, on October 5. NDFB spokesman S. Sanjarang has denied the charges, calling them "totally baseless".

Hagrama Mohilary, chief of the Bodoland Territorial Council (BTC), under whose administrative jurisdiction the scene of the current violence falls, has also pointed fingers at the rebel group. "NDFB militants have tried to cash in on the situation by targeting the Muslim settlers," he said. Backing Mohilary, Assam chief minister Tarun Gogoi added: "We are investigating. If the charges against NDFB men are true, we may even review our ceasefire with the group."

Mohilary and his colleagues in the Bodo council are aware that if the NDFB, on a ceasefire deal since 2005, is to clinch a peace deal with New Delhi in the coming days, it will lay claim to the same politico-administrative space that they are currently occupying in the Bodo heartland. This will be a tough concession for Mohilary and former Bodo Liberation Tiger (BLT) rebels to make. After all, they only got a taste of power five years ago after signing the Bodo Accord with the Centre.

Clashes between the Bodos, Assam's largest tribal group in the plains, and Muslim settlers are nothing new. They were a fallout of the first agreement with the homeland-seeking Bodos, signed on February 20, 1993, between New Delhi and the All Bodo Students' Union (ABSU). The agreement led to the setting up of the 40-member Bodoland Autonomous Council (BAC) with administrative powers.

What the agreement did not do was demarcate the boundary of the council; instead the government devised a rough formula whereby villages with a 50 per cent Bodo population would fall under it. It prompted Bodo miscreants to oust settlers in a bid to alter the demography of villages where the Bodos were in a minority. Beginning October 12, 1993, Bodos started clashing with Muslim settlers, a battle that continues to this day. It has already claimed more than 200 lives and displaced over two lakh people.