‘Poverty Is Violence With Tacit Consent’

Glued to Gandhism, Ela Bhatt believes the principles are even more valid now 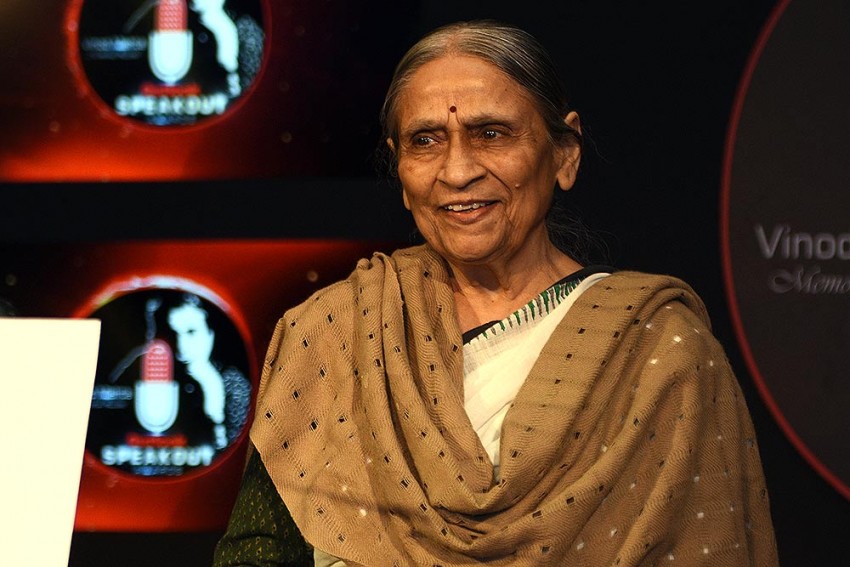 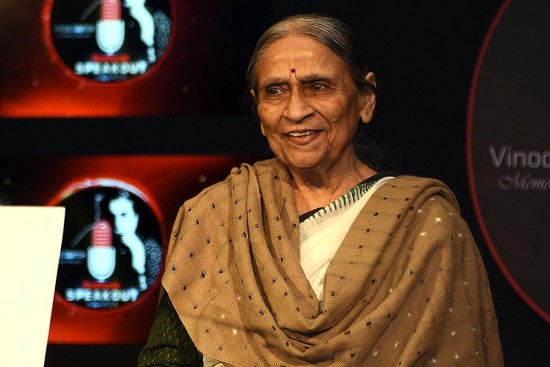 She grew up in Ahmedabad during the heady days of India’s freedom struggle and, as a 14-year-old, rose to answer Mahatma Gandhi’s call for Rashtra Nirmaan or nation building. Now, at 83, Ela Bhatt, founder of SEWA (Self-Employed Women’s Association of India), believes that the country has lost the opportunity of real freedom or ‘poorna swaraj’ Bapu had envisaged.

“Gandhiji wanted each and every person to experience freedom, but that is not the case. Uska anubhav sab ko nahi ho raha (not everyone is experiencing it). A lot needs to be done,” says Bhatt, the recipient of Outlook’s SpeakOut Lifetime Achievement Award. The “gentle revolutionary”, as she is known, the diminutive Bhatt continues to strive for the Gandhian ideal of self-sufficiency and a more just society.

Jyoti Macwan, general secretary of the 1972-formed SEWA, says she does not have to read about Gandhi to know what he stood for. “We at SEWA see Ela ben living by those ideals. Through her, we understand Gandhi,” she says.

Bhatt has dedicated her life to making visible the contributions of India’s poor and self-employed women, their voices heard. A formidable network of women-run cooperatives she has built also account for advancing modern ambitions. Bhatt calls it the quest for economic freedom in a democratic India.

In her quiet and assured manner that gives a peek into her steely resolve, the graceful octogenarian, draped in a hand-spun cotton saree, talks about the persisting inequalities in soc­iety, the insecurities of the poor, a general sense of cynicism and the “impatient and intolerant” youth. She articulates with equal ease the issues of self-reliance at the grassroots and pitfalls of modern technology, visible most recently in suicidal internet games like the Blue Whale.

My maternal grandfather Manidhar Prasad Vyas was a doctor at Ahmedabad Civil hospital. He was deeply influenced by Gandhiji and satyagraha. He headed the first team that went to Dharasana as part of the Dandi March (1930).

Even as kids, we were drawn into the freedom movement. In school, we used to hear slogans being shouted outside, gunshots being fired. Satyagrahis used to come into the school and we used to help them hide. Our teachers used to tell us about the ongoing struggle. It became part of our education.

In 1947, I did my matriculation and joined college. The whole focus was on rebuilding the nation. We were a generation that had no confusion in our minds as to how to do things. Gandhiji had shown the way. He had given the direction for Rashtra Nirmaan. My mother, Vanalila Vyas, was a staunch nationalist, and very progressive. She was also secretary of the All India Women’s Conference. My father, Sumantrai Bhatt, came from a family of lawyers and was a lawyer himself.

I completed law and joined Textile Labour Association (TLA), founded by Gandhiji. Ahmedabad was a newly growing textile town. Its women workers, carrying reams of cloth on head, were being exploited. They came to TLA. We fought for their higher wages.

Working at TLA, I used to go to the lab­our court as a young lawyer. I saw how the relationship between the malik (owner) and the mazdoor (labourer) could be more conciliatory. I became aware of the principal of trusteeship, and realised how we are all trustees to society. The capitalist is also a trustee. This is the practical and also spiritual way to live together.

Inequality has grown; the poor have become more vulnerable. We are all trustees to society—the capitalist too. SEWA works for more reconciliatory ties between malik and mazdoor.

Also, while there were state laws to protect industrial workers, there was nothing for the self-employed women, supplementing the incomes of their families. We fought for their rights, even created a cooperative bank for them. SEWA was born as a women’s collective that worked outside the textile mills and other formalised sources of income—something that was out of TLA’s purview. We found that poor women in Ahmedabad were not just domestic workers. They conducted a variety of businesses—as hawkers, vendors, labourers—and yet were not being represented in India’s economy. My work at SEWA has helped me see a lot of positive things over the years. Given an opportunity, I see, how they cut off their shackles and grow.

My early days in the labour court were tense—as a woman lawyer with a stammer. The slightest comment about my clothes or my short height would upset me, and I would begin to stammer. There were hardly any women in court. Sometimes I was the only woman present, but the atmosphere at that time developed us. As women we kept our maryada and did what needed to be done for the nation. Overall, the public life at that time was safe, encouraging and appreciative. I have dealt with this in my memoirs, We Are Poor But So Many.

Inequality seems to have grown in society. The poor may not have become poorer, but their vulnerability has increased. Real freedom continues to elude them. Poverty is violence with the consent of society. Unless primary needs of society—roti, kapada aur makaan—are satisfied for everyone, we have not achieved swaraj. We need to learn how to decentralise power and also resources. We have to create an Indian model of development. The whole struggle for swaraj is still going on.

The class divisions continue to exist. They start from the school level itself. Those who have money and can afford good education continue to have access to a better life. They then become part of the ruling class, perpetuating the inequality.

Though the times have changed and the country is moving in a different direction now, Gandhi’s values are still alive and as valid now as they were during the freedom struggle. There are a lot of differences between this (present-day) India and that India, a lot of good things have happened and are still happening in terms of growth and development but there is still the general atmosphere of insecurity: an all-encompassing sense of being taken for a ride. It is difficult to decide whom to trust as one gets cheated over little things. You cannot trust a book, a research finding, a drug or even a public speech.

Future belongs to the Young

I interact with the youth on a regular basis. My grandchildren also provide me a window to the life of the young. Today’s youth are definitely not as naïve as we used to be at their age. They are impatient and therefore intolerant. They do not have faith in the process of things. We cherished the values of idealism. Even they are idealistic in their own way and want to do something for the country.

Each and every youth wants to know about poverty and inequality. They want to know what they can do to help. But they are not getting any answers. The answers are not coming from anyone—not from parents, not from teachers, not from religious heads or from politicians.

They ask me also. I tell them, “Go and find your answers. Go out and talk to the fields. Talk to the trees. Talk to the grass. Talk to people. You will find your answer.” Every living being out there has the answer. We are all bound to each other. This is called ‘Anubandh’ (also the name of Bhatt’s second book). Everything is correlated.

It is disturbing how the young are getting disillusioned. One day, a young boy came back from school with a sheet of paper that talked of different ways of committing suicide. Look at games like Blue Whale. Why are the children getting drawn to them? Who created this game? Why do people produce weapons; do R&D to produce more and more lethal weapons? We have to correlate the impact of our action on society and on mother earth. The world is sustained by the sum of all our correlated actions. Together we form the world. Like oceanic circles, or the rooting branches of the great banyan tree, we are bound to each other and to the land.

“The Audience Has Changed. Why Shouldn’t We?”